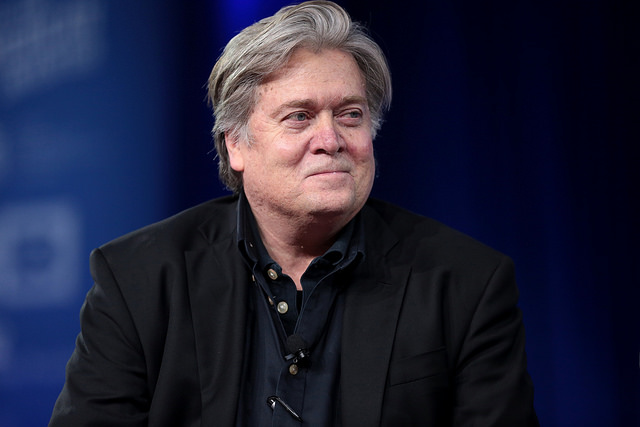 CONCERNS HAVE BEEN RAISED about a senior Scottish businessman’s involvement in a visit to Scotland last week by Steve Bannon, the far-right former counsellor and strategist to President Donald Trump.

At a meeting in the five-star Gleneagles Hotel on Friday, reported on by the Sunday Herald newspaper, Bannon is understood to have given a defence of Trump at a gathering of the think tank Scotland International Ltd (SIL). According to an unnamed source present at the meeting quoted by the Sunday Herald, Bannon also spoke about “his philosophy”.

In an appearance apparently unknown to all but participants in the SIL gathering, Bannon reportedly participated in a panel discussion lasting 25 minutes, followed by a question and answer session.

SIL, under whose auspices Bannon’s visit took place, is fronted by the prominent Edinburgh-based businessman Sir Angus Grossart, who is also chairman of Charlotte Street Partners, a lobbying firm which has courted interest and controversy in the past over its private lobbying activities and access to senior politicians in Scotland.

Grossart, as well as fronting SIL and chairing Charlotte Street Partners, has also held high-profile positions such as Vice Chairman of the Royal Bank of Scotland, Chairman of the National Galleries of Scotland Board of Trustees, and is currently chairman and executive director of the Edinburgh merchant bank Noble Grossart.

Andrew Wilson, another Charlotte Street partner, is also head of the Scottish Government’s Growth Commission, which the SNP hopes will help make the economic case for Scottish independence, and possibly a second referendum. Other notable appointees include the Scottish journalist Chris Deerin and Kevin Pringle, former advisor to Alex Salmond, who left the SNP after 26 years to take up a position in Charlotte Street Partners.

A former investment banker, Bannon was a founding member of the board of Breitbart News, a far-right online news site notorious for its prejudice-laden content. Following the death of founder Andrew Breitbart in 2012, Bannon became executive chair of Breitbart News LLC, parent company to Breitbart News, which in 2016 he referred to as “the platform for the alt right”.

Bannon left Breitbart to become a chief executive of Donald Trump’s 2016 presidential campaign, and following Trump’s unexpected victory, became the new president’s chief strategist and senior counsellor. Upon his appointment, a spokesperson for the then-Senate Minority leader Harry Reid stated: “President-elect Trump’s choice of Steven Bannon as his top aide signals that white supremacists will be represented at the highest levels in Trump’s White House.”

Bannon ceased working at the White House in August of 2017, less than a week after the violent events of the Charlottesville ‘Unite the Right’ rally, which saw the murder of anti-fascist activist Heather Heyer.

Charlotte Street Partners is no stranger to controversy either. In 2015, the firm was hired for an undisclosed sum by Universities Scotland, the organisation representing the principals of senior management groups in Scottish universities, to help prepare Universities Scotland’s opposition to Scottish Government education reforms which sought to expand democratic decision making in higher education.

In April of 2017, Scottish investigative news website the Ferret reported that Charlotte Street was lobbying on behalf of Rupert Murdoch-owned newspapers in Scotland, drawing criticism from the Media Reform Coalition.

In 2016, when ex-SNP MSP Andrew Wilson was tasked with chairing the SNP’s Growth Commission, concerns were raised over his position within Charlotte Street Partners by activists, with Dr Will Dinan of Spinwatch saying: “He is a well known conduit between the corporate sector in Scotland and the Scottish Government, and has enjoyed privileged access to senior ministers in his role as a lobbyist at Charlotte Street Partners. While some might say this profile makes him the ideal person to lead this new commission, others will rightly worry about potential conflicts of interest between his commercial work and policy influence.”

Speaking to CommonSpace, Jonathon Shafi, board member of the Scottish think tank New Foreign Policy, condemned Bannon’s visit, saying: “This summit comes to light on the back of Trump’s retweeting of Britain First posts, a group whose leader has recently been charged for racial abuse.

“It is of real concern that ‘Scotland International Ltd’, headed up by Angus Grossart – a well-known figure in Scottish business – has chosen to invite Bannon under the radar.” Jonathon Shafi, New Foreign Policy

“That is why it is of real concern that ‘Scotland International Ltd’, headed up by Angus Grossart – a well-known figure in Scottish business – has chosen to invite Bannon under the radar for what we can only assume is a high powered exchange of ideas.

“If an independent Scotland is going to set a new benchmark in international relations it must uncouple from pre-existing elite networks of power and develop new strategies. A new foreign policy and a new economy are needed – but that means confronting the establishment, not acquiescing to it. Especially if Steve Bannon is a key speaker to secret summits, hidden from public view.”

The details of what Bannon discussed during his visit to Gleneagles remain largely unclear. CommonSpace has been unable to contact Grossart for further comment, and was awaiting a response from Andrew Wilson and Charlotte Street Partners at the time of publication.