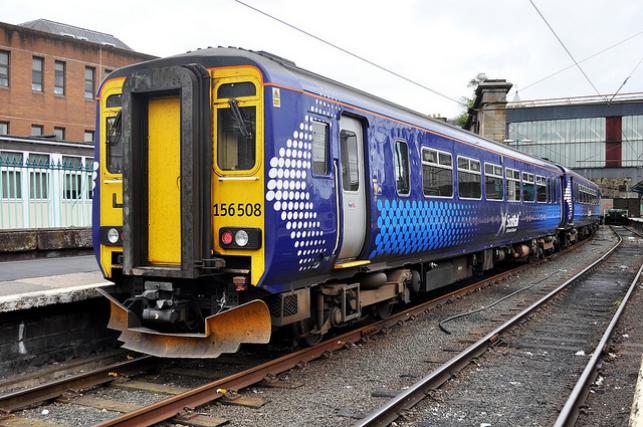 Rail union condemns SNP for siding with the Tories in favour of not activating the break clause, while Labour are accused of “rank hypocrisy”

Scottish Labour’s hopes of winning backing from Scottish Government ministers to exercise the break clause in the franchise agreement by 2020 – which would terminate Abellio’s contract three years by 2022, three years ahead of its scheduled end in 2025 – was voted down by 85 votes to 34, despite the Scottish Government’s previous commitment to working up a public sector bid.

The vote followed revelations in October that transport secretary Michael Matheson had allowed ScotRail performance targets included in its compliance agreement to be waived until June 2019, allowing for an interval in which the struggling franchise might recover.

In light of the fact that Matheson did not inform the Scottish Parliament of this, TSSA has called for the minister’s resignation.

“Nationalisation of ScotRail at the earliest opportunity is in the best interests of Scotland. It would give us lower fares and better investment in trains.” TSSA general secretary Manuel Cortes

It has also emerged that ScotRail was given an advance payment of taxpayer funding in spite of ongoing concerns regarding its falling performance levels, as ScotRail bosses were questioned by Holyrood’s Rural Economy and Connectivity Committee this morning. However, ScotRail Alliance director Alex Hynes told MSPs that “it’s not true to say that ScotRail’s received anything that it hasn’t been due under the terms of the franchise agreement.”

Additionally, new figures have also shown ScotRail’s performance level is now at its lowest level since the franchise began, with its moving annual average for punctuality hitting a franchise low of 87.5 per cent, below the agreed breach level of 88.22 per cent. According to BBC News, ScotRail has said there had been “significant disruption” in Scotland due to September’s Storm Ali.

Responding to the outcome of the vote, the TSSA condemned both the SNP and the Scottish Conservatives, with TSSA general secretary Manuel Cortes saying: “The SNP have revealed their true colours today, joining together with the Tories to vote down a motion that would bring an end to Abellio’s franchise of ScotRail.

“It’s no surprise that the Tories voted this motion down today. Privatisation is, after all, their Frankenstein experiment.

“But the SNP should be hanging their heads in shame. Not only because they have revealed their left-wing image for the lie it is, but because today they have failed the people of Scotland.

“Nationalisation of ScotRail at the earliest opportunity is in the best interests of Scotland. It would give us lower fares and better investment in trains. But at its heart the SNP have always been neo liberal not neo left, favouring profits for privateers through the franchise system over rail fairness. And today that showed when they voted to allow Abellio to keep ripping off taxpayer and commuter alike until 2025.

“Abellio have already been gifted a 12 month waiver of its franchise targets by Transport Monster – not a typo – Michael Matheson. Now the SNP have voted with the Tories not to use the break clause. Christmas has come early for Abellio. But it’s going to be a Winter of Discontent and rail misery for ScotRail’s customers.”

Abellio, the overseas arm of Dutch Railways, has previously been forced to inject £10m into Scotrail, and has suffered delays in its enhancement plans. Despite this, a Scottish Government spokesperson stressed before the vote that ScotRail performance has remained consistently ahead of the GB average, and noted that this average has steadily worsened since Network Rail moved timetable planning from Scotland to its Milton Keynes HQ in 2012. The Scottish Government has strongly advocated the devolution of “essential railway functions” to Scotland as a means of improving rail service.

Arguing in favour of the re-nationalisation of railways, Labour MSP Colin Smyth today said that today’s debate should put Scotland’s rail passengers ahead of “profiteers”, describing Abellio’s mismanagement of ScotRail as a case of “fail, fail, fail,” adding the transport secretary had given them a “licence to fail” until May next year.

In response, connectivity minister Paul Wheelhouse contended that 63 per cent of the recorded faults in ScotRail services were due to Network Rail. While Wheelhouse acknowledged that ScotRail faced challenges, he praised them for their management of delays associated with the introduction of new Hitachi trains, and noted that seating will be increased by 23 per cent since ScotRail has taken over the franchise.

Wheelhouse stated: “While Colin Smyth and his colleagues may not recognise it, ScotRail is delivering its revolution in rail for passengers across the entire Scottish rail network.”

“A publicly run rail service, that’s set up in the interest of passengers rather than shareholder profits, won’t magically get up and running by itself. It needs the support of government.” Scottish Green transport spokesperson John Finnie

Scottish Tory MSP Jamie Greene disputed the minister’s claim that the majority of delays were attributable to Network Rail, describing it as “factually misleading”, and arguing the delays such as weather delays, vandalism and passengers falling ill were being “lumped in” with failures for which Network Rail were responsible.

Green MSP John Finnie, his party’s transport spokesperson, articulating the Scottish Greens’ support for the Labour motion, argued that the franchise model is a “Tory ruse” to deliver public money to private companies.

Finnie commented: “A publicly run rail service, that’s set up in the interest of passengers rather than shareholder profits, won’t magically get up and running by itself. It needs the support of government and a determination from ministers to see that it’s in place by the original 2020 deadline.

“It’s my belief that the Scottish Government should exercise the break clause in the ScotRail franchise at the earliest opportunity. Delivering a service that’s run in the public interest is simply about political will and SNP ministers need to start showing they have it.”

SNP MSP Kenneth Gibson said that today’s debate was an “exercise in rank hypocrisy from Labour.”

“Once again, Labour is calling on the Scottish Government to do something that time and again, they’ve proven themselves unwilling to do.” SNP MSP Kenneth Gibson

Gibson observed that Labour was in power of 13 years, and “made now effort whatsoever to return to railways to public ownership.” He further pointed out that, under UK Government legislation, the Scottish Government did not have the power to include a public sector bid for the service when the 2013 franchise was tendered.

“Once again, Labour is calling on the Scottish Government to do something that time and again, they’ve proven themselves unwilling to do.”

Gibson went on the criticise Labour’s conduct in Wales, saying that in “clear contrast” to their 2016 Welsh assembly manifesto, Labour awarded the Wales and Borders rail franchise to a joint-venture by French and Spanish operators, quoting the RMT trade union as being “appalled and angry” at Labour’s actions on the matter.

Despite Scottish Labour’s endorsement of the report ‘A Public Future for Scotland’s Railways’, jointly produced by the TSSA and the Common Weal think tank, in November 2017, no Labour MSPs referred to the recommendations of the report during the debate.

The report offers guidance on how Scotrail could most effectively be nationalised, and suggests the creation of a publicly owned company based on similar models long employed by other European nations with higher standards and lower costs. The report argues this not only as a the fairest and most effective way to operate Scotland’s railways, but as a catalyst to transform Scotland’s entire transport system.

Commenting on today’s vote, a Common Weal spokesperson told CommonSpace: “We are hugely disappointed at the outcome of today’s debate on ScotRail.

“Passengers and tax payers alike are losing out to Abellio. Our report shows how we can bring our rail into public hands – and the economic and social benefits this would bring. Now we face a delay on putting this into action until the next parliament.

“The Scottish Government should spend this time ensuring that the public bid is rock solid.