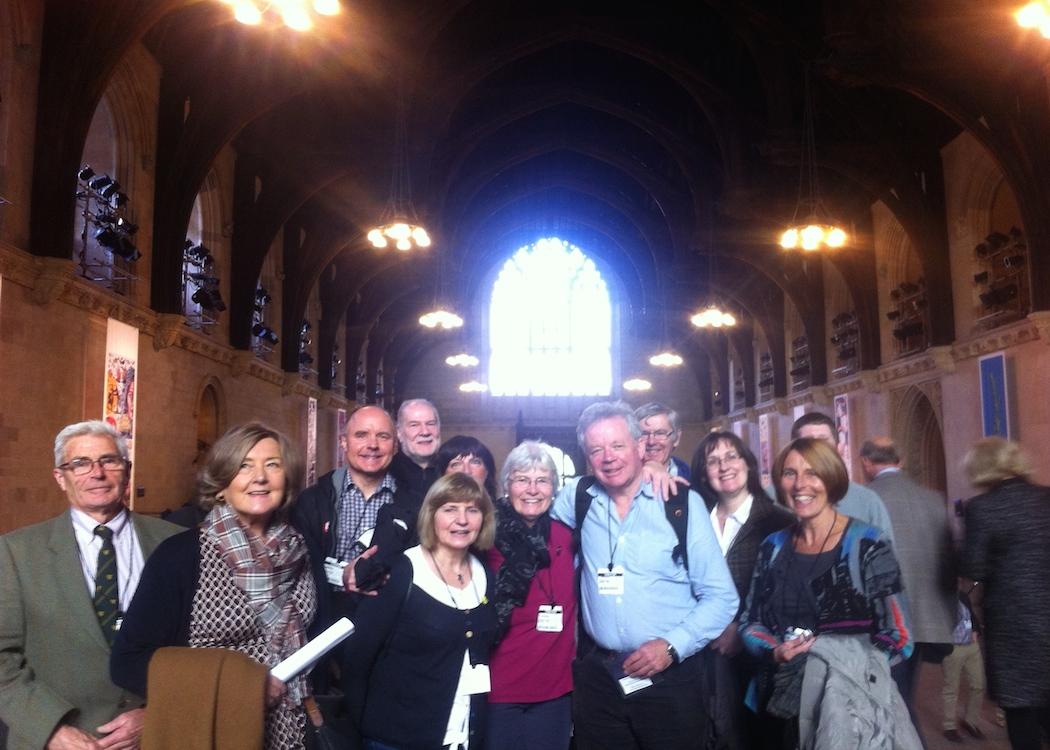 COMMUNITY ACTIVISTS hosted many of Scotland’s new MPs today [Tuesday 20 October] in a meeting to persuade politicians to oppose the Transatlantic Trade and Investment Partnership (TTIP) pact currently being negotiated between the European Commission and the United States.

The session was organised by a travelling delegation of 18 Scottish anti-TTIP activists, who describe the deal as a corporate power grab that would threaten public services, environmental protection and undermine economic control in Scotland.

Jean Kemp, an activist from the St Andrews TTIP Group, called on the SNP to “be brave and pledge to change the SNP’s current manifesto”, which raises concerns over the pact but does not oppose it in full.

At first it was suggested by Tasmina Ahmed-Sheikh that CommonSpace should not report from inside the meeting surrounding the transparency of TTIP.

“Scotland does not want or need secret courts with corporate lawyers. Our own legal is strong enough,” she told the committee room gathering in the Palace of Westminster.

The campaigners were successful in persuading all SNP MPs to sign the Early Day Motion 146, which pledged the group to oppose secret corporate courts and the regulatory framework of TTIP.

“We voted for you to fight for Scotland and social justice. Not to be pushed about by the interests of Mr Ratcliffe [of gas giant Ineos] or Mr Trump [controversial businessman] or Anglian Water [tax avoiders who recently won a public water contract in Scotland ].

“A good TTIP is not possible while we remain in the dark about this dirty trade deal,” she said.

The campaigners presented a video to the MPs with support from the Scottish Trades Union Congress, Friends of the Earth Scotland, Global Justice Now and Common Weal.

At first it was suggested by Ahmed-Sheikh that CommonSpace should not report from inside the meeting surrounding the transparency of TTIP.

Andy Collins, a Green Party activist from Fife, presented a case that TTIP is an anti-trade deal – which would threaten jobs and entrench inequality: “It’s not just about money. If we focus on money and nothing but money then that is the road to hell.”

He continued: “With TTIP there is a risk that smaller companies get squeezed out of business. They are the future source of growth. And there is a problem with big companies. They control governments. Look at Fife where Amazon comes in and relies on public funding while paying poor wages to staff.

“The biggest subsidy junkies in the country are the big corporations. They get lots of money in research and tax subsidy but don’t want to pay anything back in return.”

On the controversial Industrial State Disputes Settlement clause of the corporate deal, which would empower corporation to sue elected governments for not abiding by multinational deals, Collins added: “I couldn’t afford to pay myself or any of my staff if I had to pay a corporate lawyer. I don’t have any lobbying power like corporations. I can’t afford to wine and dine [my MP].

Collins claimed that the Scottish Government was already under pressure from companies like Ineos over fracking and that TTIP would entrench the power of big business over public interest issues.

Tasmina Ahmed-Sheikh, in response to the presentations, reiterated the SNP’s current position which criticises the deal – but refused to oppose TTIP until the full text is available.

There was a mixed reaction to whether the meeting was a success. One activist said: “I think it gives a good base. It represents a position for everyone to start acting – MPs and in conjunction with us.”

Currently – while the deal is negotiated amid tight security and secrecy – the SNP say they are unaware of its contents.

Ross MacKay, a campaigner from Aberdeen, warned that “you have to take a position sooner before all you have is a straight yes or no,” alluding to the fact that when the text is finalised most negotiations will have taken place.

Stewart McDonald MP presented a more open position, suggesting that the SNP “could develop our position a bit more” on further red line issues for the party around human rights and the environment.

Negotiations and the SNP position is complicated by Scotland’s lack of recognition in the council of ministers, meaning that it is the UK Government which presides over the process on Scotland’s behalf.

McDonald’s remarks represented a small boost for campaigners who are hopeful that the party could move towards a stronger position on TTIP. “Our minds are more open on this than you think,” he added.

William McGregor, a retired farmer from Fife, warned the gathering that the pact also represents a threat to the future of Scottish farming.

Most MPs – with pressed diary commitments – mainly attended for the group photo.

However, another campaigner was critical of the approach taken by Ahmed-Sheikh and suggested that there was a “condescending” attitude towards those present at the meeting.

There was a mixed reaction to whether the meeting was a success. One activist said: “I think it gives a good base. It represents a position for everyone to start acting – MPs and in conjunction with us.”

However, another campaigner was critical of the approach taken by Ahmed-Sheikh and suggested that there was a “condescending” attitude towards those present at the meeting.

The campaign group will now be holding individual meetings with MPs for the rest of the day and have a protest planned tomorrow [Wednesday 21 October] in London.