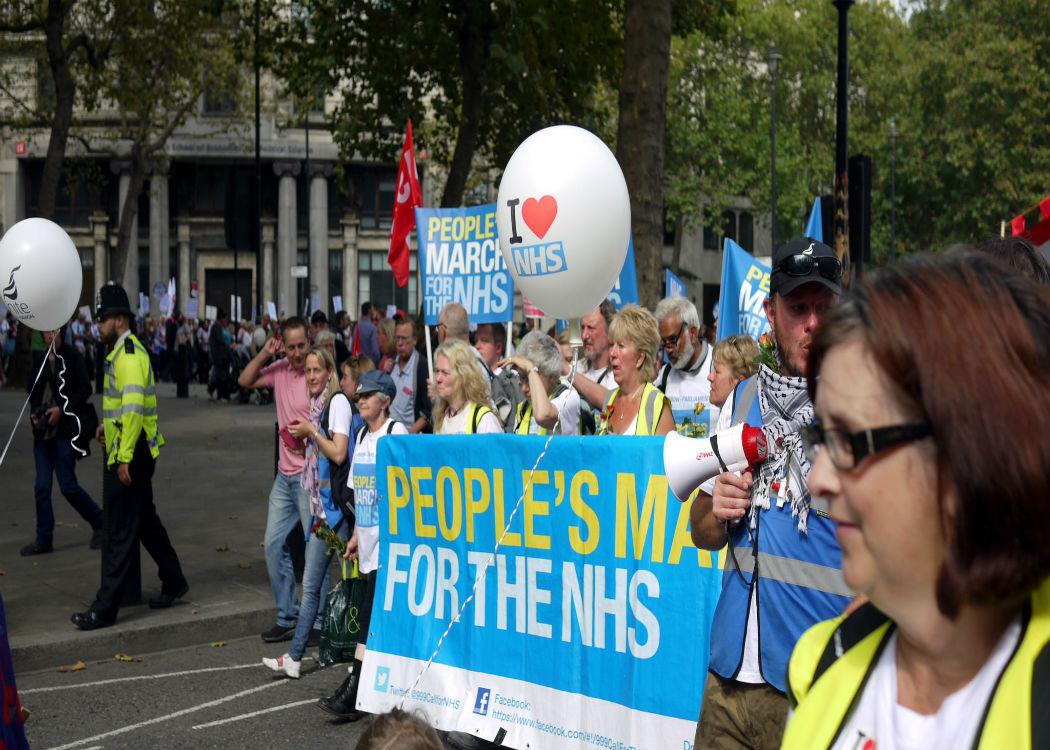 LORD Livingstone, UK Trade Minister, will address the Scottish Parliament on the future of the Trans-Atlantic Trade Partnership (TTIP) on Thursday, and is expected to be greeted by hundreds of NHS supporters who fear the trade deal could open the door to the privatisation of Scotland’s health service.

The demonstration at Holyrood will be followed by hundreds of residents of Costorphine and Ratho in Edinburgh making their own personal stand, by displaying ‘Protect our NHS’ signs outside their homes.

The proposed trade deal between the US and the European Union (EU) has sparked opposition across Europe, as campaigners believe TTIP only benefits global corporations who seek to undermine workers’ rights and privatise services.

The Scottish Government and NHS campaigners say the UK Government could ensure the NHS is vetoed from TTIP in the same way the French government has vetoed its film industry from any trade deal, but Cameron has made no indication that he’s willing to contemplate this.

Lord Livingstone is expected to defend the UK Government’s stance to the European and External Relations Committee at the Scottish Parliament, much to the chagrin of ‘The People’s NHS’ campaign, which has organised the demonstration.

Over 100 MSPs, including all 64 of the SNP’s MSPs, have signed up to the campaign’s demand for Cameron to veto the NHS from the deal, and politicians are expected to stand with activists on the demonstration with ‘the pledge’, encouraging their colleagues to sign too.

Linda Clarke, Peoples’ NHS activist and a former NHS worker said: “Scotland is sending a strong message to David Cameron – use your veto and protect our NHS. We represent millions of Scots who believe it’s simply wrong for the NHS to be part of a US trade deal.

“Not only will there be a major protest outside the Scottish Parliament but hundreds of households are delivering a clear message by displaying ‘protect our NHS’ signs in Edinburgh.

“Our campaign is supported by the majority of Scottish politicians. SNP, Labour, Greens and Independent MSPs have all committed their support to exempt our NHS from TTIP.”

Teresa Lavery, a local Ratho resident, added: “Not only is there a major protest outside the Scottish Parliament but hundreds of households in my community and beyond are delivering a clear message by displaying ‘protect our NHS’ signs in Edinburgh.”

The TTIP negotiations, which have been conducted in secret, appear to be breaking down after it was leaked that France and Germany have stated that it’s unlikely there will be an agreement this year, adding that the controversial Investor-State Dispute Settlement process, which would transfer legal disputes away from nation-states and national courts to secret international corporate courts, is off the table.

In a further blow, Syriza, the new radical left Greek government, has already said that as long as it is in power it will not sign the TTIP deal. TTIP requires ratification from all EU member states.

However, in US President Obama’s recent meeting with German Chancellor Angela Merkel, he emphasised the importance of getting the TTIP deal done, and it was reported by one news agency that the President saw TTIP as part of “his legacy”.

The Scottish Government has stated that while it is not opposed to TTIP, it is seeking “cast iron assurances” that the NHS will not be up for grabs from the deal.

Former First Minister Alex Salmond stated in a letter to David Cameron that he was “extremely concerned” about aspects of TTIP.

Nearly one million people have signed an EU-wide petition against the trade deal, and Jen Stout, Scottish co-ordinator for the campaign group 38 degrees, said: “TTIP represents one of the biggest threats to democracy and social justice. If this treaty goes ahead, the agenda of privatisation we’ve all suffered under in the UK for years will become totally entrenched and irreversible.

“Our public services and particularly our NHS are under huge threat from TTIP. But the public opposition is huge, and we can definitely win the fight to scrap TTIP and protect the NHS – if we all come together now.”

A TTIP summit will take place in Holyrood at 5.30pm, after Lord Livingstone’s speech. Hosted by Christine McKelvie MSP, convenor of the European and External Affairs Committee, it is set to “discuss the biggest free trade negotiations in history and its implications”.