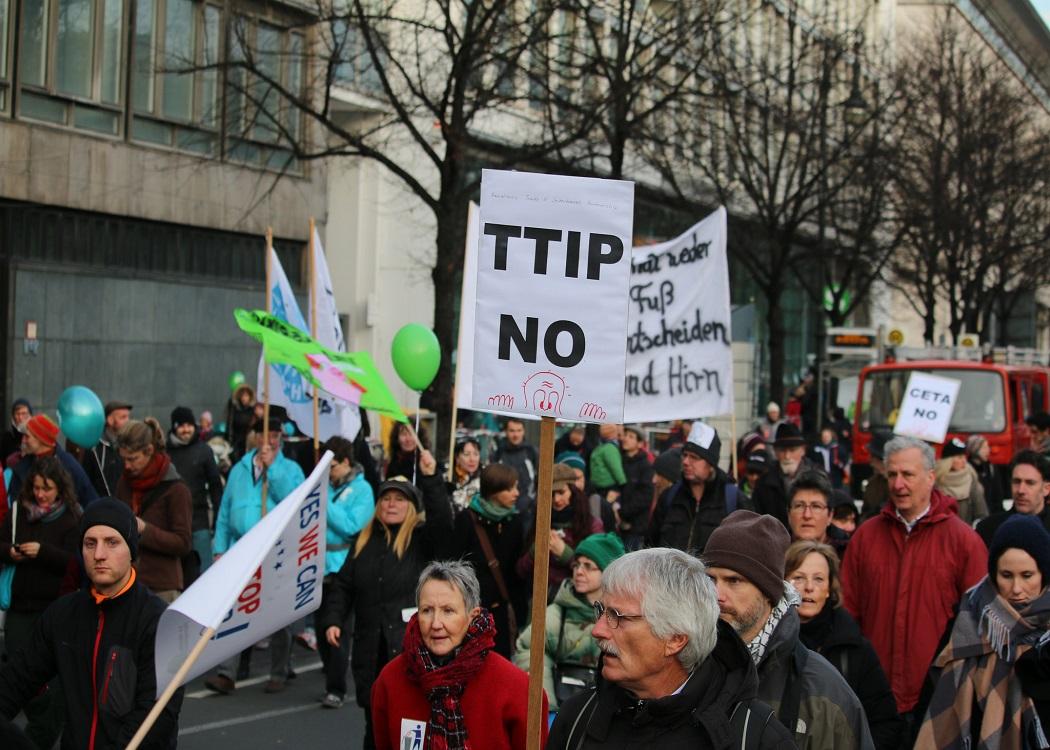 In this analysis, Ben Wray explores the implications of TTIP and uncovers where the calculations promising growth and jobs really come from.

THE Trans-Atlantic Trade and Investment Partnership (TTIP) is a public relations disaster. Most trade deals sail through without the general public blinking an eye, but the sheer ugliness of TTIP has forced public action, and led to setbacks for the masters of the EU and US economies.

One of the most controversial parts of TTIP, the ‘Investor State Dispute Settlement’ (ISDS), was simply a replica of international corporate kangaroo courts that have been settling disputes (mostly) in favour of corporations over nation states all over the world, but TTIP’s ISDS got noticed, and now has been banished out of the negotiations.

With ISDS gone, can TTIP’s public relations people regain a sure footing in the public eye? After all, trade isn’t a bad thing, is it?

Even Trident nuclear missiles at Faslane, weapons of mass destruction, are justified by many Scottish politicians with the use of one word: ‘jobs’. And so it is with TTIP, which is why many politicians who disliked ISDS, like First Minister Nicola Sturgeon, are reticent about opposing it outright.

They will oppose any ramifications for the NHS, for example, but refuse to draw the obvious logical conclusion that imposing market discipline on every other aspect of the economy and public services might also be a bad idea, as they don’t want to be labelled ‘anti-jobs’ and ‘anti-growth’.

But is it really true? Will TTIP really create jobs and growth in Scotland?

TTIP’s first appearance in the media gave the general public the impression that the impact the trade deal will have on jobs and growth would be unequivocally positive.

The BBC’s first article on TTIP titled ‘EU and US free-trade talks launched’ on 13 February 2013 contained no critical commentary, with Steve Davies of the Institute of Economic Affairs (Margaret Thatcher’s favourite think-tank) remarking that it ” will be good news for economic growth” in the EU.

Subsequent reports from the Centre for Economic Policy Research (CEPR), Research and Expertise of the World Economy (CEPII) and the Bertelsmann Foundation, all released in 2013, claimed to have found evidence of the huge job growth that would follow from TTIP in the EU and the US.

The European Commission (EC) even presented CEPR’s report on the ‘about TTIP’ section of its website as fact. In the ‘quick facts on TTIP’ box, the EC argues that “TTIP is designed to drive growth and jobs. Independent research shows that TTIP could boost: the EU’s economy by EUR120bn; the US economy by EUR90bn; the rest of the world by EUR100bn”.

John Swinney, Scottish Government finance minister, in a letter to Christina McKelvie SNP MSP on 5 August, referenced the CEPR report, claiming that “arising from TTIP”, the UK’s national income would increase by PS4bn-PS10bn and Scottish exports and jobs could increase substantially.

What is being presented by the EC and Swinney as hard facts about the positive outcomes of TTIP for jobs and growth is based on computer simulations that some experts say are highly questionable. Jeronim Capaldo, author of a report arguing TTIP would have a devastating effect on EU economies, tells CommonSpace that the data these computer simulations are based on “excludes that any change in employment might ever happen”.

Capaldo explains that all of the above reports, including CEPR, use very similar quantitative data modelling, known in technical terms as Computable General Equilibrium (CGE), to come up with the huge figures for growth and jobs from TTIP.

One of the main assumptions built in to CEPR’s data modelling is that when regulations are removed and ‘competitiveness’ increases, the jobs that are lost from the businesses that cannot compete are transferred to the successful businesses, creating a full employment equilibrium where no jobs are lost.

In practice, equilibrium of this kind is rarely if ever found in real economies, as successful businesses do not simply employ at the rate failing businesses lay people off.

A full employment equilibrium in an economy the size of the US and the EU combined makes it even more unlikely, as factors such as geographical distance, domestic demand, skills gaps, working hours and pay are all differentiated across national and transnational economies.

Capaldo explains: “We’re so used to thinking that more trade is always good that we overlook strong evidence to the contrary. If we expect a model like CEPR’s to give any answers on employment we’re missing the point. Those models based on CGE typically assume that when the economy contracts wages decrease enough to keep all workers employed.

“But persistent high unemployment in Europe says this assumption is too far from reality: when the economy contracts, employment contracts as well.”

The same CGE computer-based data modelling is used thoroughly by the World Bank, and has projected outcomes that have not come to fruition. A World Bank study of the North American Free Trade Agreement (NAFTA) used CGE to project big increases in jobs and GDP in Mexico and America, but in reality GDP declined and wages fell in Mexico, and the effects on the US were negligible.

The ideological origins of TTIP is clear, but for many the argument can still be justified in practical terms. In John Swinney’s 5 August letter on TTIP, he argues that “the US is Scotland’s largest export market out-with the EU and most significant source of inward investment”.

So wouldn’t increased exports and imports to the US mean greater investment and jobs? Even on this territory on closer inspection TTIP looks shaky.

While increased economic activity with the US would follow from TTIP, Scotland’s biggest export market, the EU, is likely to see vast reductions in trade from an increased reliance on the US market.

Trade with non-TTIP countries would be likely to decline as well. Not only will the net increase in trade be marginal from TTIP, but Scotland as well as the whole of the EU will be more vulnerable to economic volatility in the US.

The impact of this marginal net increase in trade will also have a negligible effect on GDP, even according to the CEPR report, which predicts a 0.5 per cent increase for the EU by 2027, and only if regulations are cut by at least 25 per cent.

What impact will TTIP really have?

In Capaldo’s report on the likely outcomes of TTIP, publicised by the World Development Movement in the UK, he predicts a completely different picture to that of the reports using the CGE data modelling system.

Capaldo found that 583,000 jobs in the EU would be lost, with a fall in GDP, exports, income for workers, government revenue, as well as a fall in the share of income to workers versus capital and increased financial instability.

The UK figures are startling (although by no means the worst in the EU): a one per cent fall in exports within a decade, seven per cent of GDP transferred from labour to capital, a decline in income of PS3,300 per worker, a 0.4 per cent reduction in tax contributions and a net loss of 3,000 jobs.

The report finds that the US is the major benefactor of TTIP, with an increase in employment of 784,000. With labour cheaper and regulations looser in America, it’s unsurprising that in a single-market ‘race to the bottom’ across the Atlantic, jobs go West from the EU to US.

Even in the US, however, TTIP would only lead to a 0.36 per cent increase in GDP, with a slight fall in the percentage of income to labour versus capital.

Capaldo’s figures are based on the United Nations Global Policy Model (GPM) which takes into account various factors either ignored or theorised in a different way by the CGE model.

The differences in data modelling systems between GPM and CGE are vital in informing data projections, and are the reasons why the two systems find completely different outcomes. GPM is able to integrate the impact of TTIP on non-TTIP countries.

GPM also uses the keynesian principle of aggregate demand in place of CGE’s ‘full employment assumption’ to calculate the impact of cutting wages and jobs on economic activity and consumption patterns.

Capaldo takes account of the distribution of income between labour and capital, a key indicator of inequality, which leading global economists like Joseph Stiglitz, Paul Krugmann and Thomas Piketty believe to be a crucial factor in global economic stagnation and instability.

Guy Taylor, trade justice campaigner with the World Development Movement, told the Morning Star that Capaldo’s report showed that “TTIP falls down even on its own terms”.

He added: “It’s supposed to bolster growth in the EU, but in fact it will result in fewer jobs and lower wages. This is truly a deal for the one per cent, and we have to stop it.”

From “parts” to whole?

The last remaining promise of TTIP that Scottish politicians defend – that it will create jobs and growth – appears on closer scrutiny to be based on think-tank reports which use computer models with built-in assumptions that critics say don’t reflect reality. Even based on these reports, TTIP is likely to have only increased GDP by less than half a per cent in 13 years.

On the estimations of Capaldo, it’s likely to lead to over half a million job losses in the EU, as well as increasing inequality and instability. The Scottish Government has shown a willingness to re-think “parts” of TTIP, but will it listen to campaigners and question the whole premise of the trade deal?