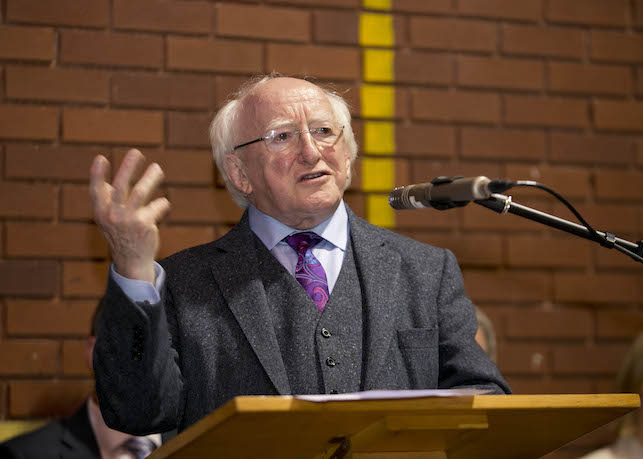 IRISH PRESIDENT MICHAEL D. HIGGINS has become one of the few international heads of state to ever address the Scottish Parliament.

Speaking of the historic and renewed links today (29 June) between “two nations at the edge of Europe”, President Higgins said “Scotland has led by example” in its democratic response to the European Union referendum.

The speech coincides with Irish and Scottish leaders discussing shared interests after a majority in England and Wales voted to Leave the EU, while Northern Ireland voted to Remain.

Addressing parliament on the fallout from the Brexit result, Higgins said: “We must respond to demagoguery with an informed, open, respectful, tolerant and engaged discourse, and with respectful debate. We are challenged to do democracy better, rather than resile to old and divisive myths based on exclusion, and often to what is thinly veiled hate or racism.

“Running like a golden thread through political theory and practice at home and abroad is the concept of empathy. This is where Scotland has led by example – but our responsibility is greater than ever.”

Higgins added that Scotland can be a global leader based on its political history.

“We can be influential advocates for those who struggle to make their voices heard in our world and, strengthened by our ancient democratic traditions and our present institutions, we can ensure a prosperous and peaceful future for all of our people,” he told MSPs.

He added that connections between Scotland and Ireland may have “too often been defined” via England “to the detriment” of independent relations.

Other Irish politicians have also sent messages of solidarity to Scotland.

Fianna Fáil, the second largest party in Oireachtas Éireann (the Irish parliament) has called for Scotland to be fast-tracked to EU membership.

Party leader Micheal Martin TD, speaking about Scotland, said: “Ireland should be its friend and demand fair play should it seek to remain in the EU.”

The remarks by Higgins and Martin coincide with a wave of solidarity messages from across Europe for Scotland, including a standing ovation in the European Parliament for SNP MEP Alyn Smith.