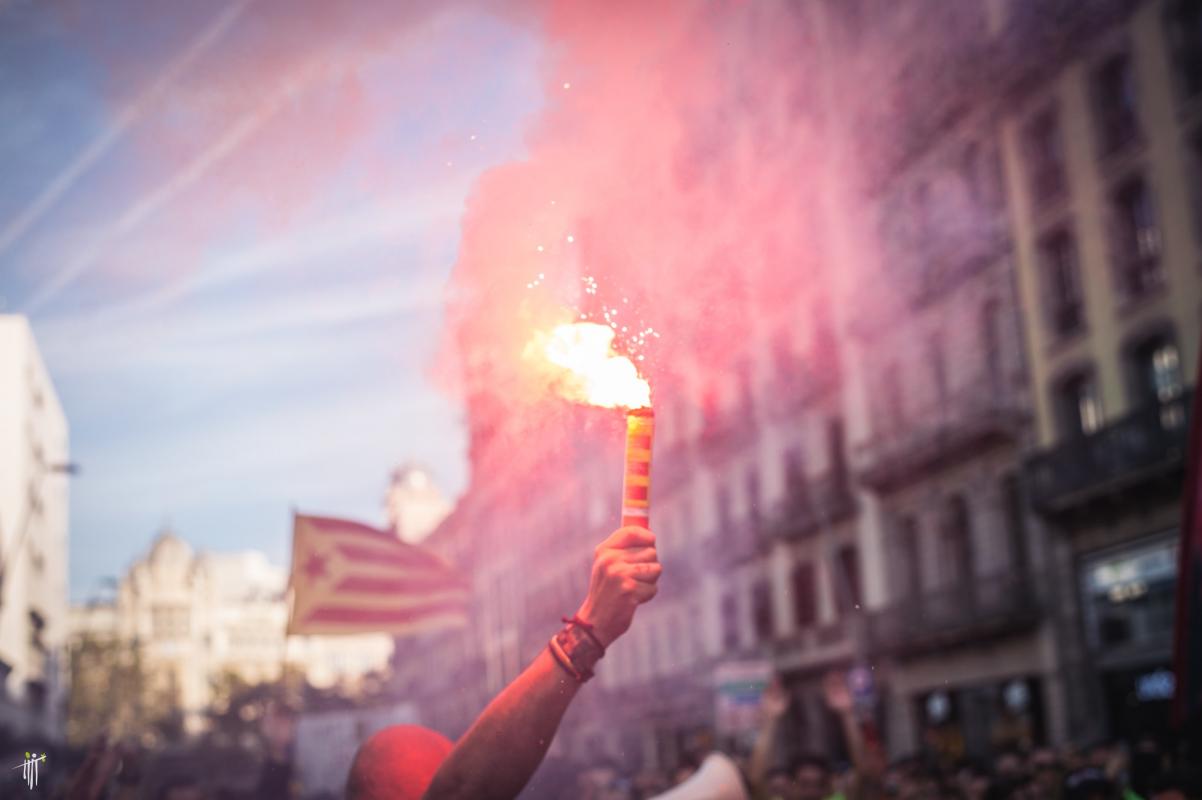 MARKING THE two year anniversary of Catalonia’s independence referendum, which took place on 1 October 2017, Catalan pro-independence activists have called for a fresh wave of civil disobedience to protest suppression by the Spanish state.

Nine leaders of the movement remain in prison and a further three have been released on bail while awaiting a verdict on a range of charges linked to their involvement in the referendum, which Spanish officials maintain was illegal. A Supreme Court ruling on these charges – in some cases as serious as ‘rebellion’, which could see activists imprisoned for up to 25 years – is expected within a matter of days.

In the midst of widepsread anticipation of a negative ruling, imprisoned leaders have asked supporters to  “return to the streets”, while Catalan President Quim Torra has said that his government intends to hold another independence referendum.

Speaking to BBC Scotland’s The Nine, Torra said that if the Supreme Court delivers guilty verdicts, his government is “not going to accept this sentence”.  Regarding his future plans for independence, Torra added: “We will do again what we did. We are going to vote again on the independence of Catalonia.”

?️ | Two years ago an independence referendum was held in Catalonia without Spain’s consent

The Spanish police and the Guardia Civil crackdown of the vote saw more than 1,000 injured

In the face of violent force and political imprisonment employed by the Spanish state to suppress the Catalan republic, allies among the Scottish independence movement have reiterated their support for Catalonia.

Former SNP MP George Kerevan has called on activists attending the All Under One Banner pro-independence demonstration in Edinburgh this Saturday (5 October) to march in solidarity with the Catalan people.

Kerevan, who co-authored a 2018 book with Chris Bambery on Catalonia Reborn: How Catalonia took on the corrupt Spanish state and the legacy of Franco, told CommonSpace: “I was in Barcelona as an official observer during the 2017 independence referendum. I saw the repression of the Civil Guard and the unquenchable passion of the Catalan people – young, old, native-born and recent immigrants – to win their freedom and build a new, fairer society.

“Two years on, that passion remains undiminished despite their democratically-elected leaders being thrown in jail and continuing arrests of independence activists. Catalonia is a lesson to Scotland. This Saturday in Edinburgh let us march both for Scottish and Catalan freedom.”

Scottish human rights lawyer Aamer Anwar, who represents exiled former Catalan government minister Clara Ponsati, tweeted today: “Ara és hora del poder de la gent, els presoners seran lliures quan Catalunya sigui lliure. No tingueu por, no defallirem. Lluitarem. No Passaran.” (“Now it’s time for the power of people, prisoners will be free when Catalonia is free. Do not be afraid, we will not let you down. We will fight. They will not pass.”)

Anwar reported that he met with Ponsati and Catalan lawyer Gonzalo Boye on 30 September to prepare for Spain’s re-execution of European Arrest Warrants. Ponsati, who will speak along with Anwar at Glasgow’s Radical Independence Campaign conference on 26 October, is an academic at St Andrews University and faced extradition charges from the Spanish government linked to the 2017 independence referendum.

While it is anticipated that tensions will rise in Catalonia following the verdicts later this month, imprisoned Catalan activists Jordi Cuixart and Jordi Sànchez have urged independence supporters to “not be carried away by the rage of the moment”, even if they receive a guilty verdict.

In an article published in El Nacional on 1 October, Cuixart and Sànchez wrote: “The future will only remain ours if we’re able to keep the seed of non-violence alive.

“The only violence that we have seen in Catalonia since 2017 is that which the Spanish state has protected and promoted… Let’s not let them confuse us.

“Non-violence is the foundation of our cause, none other than the cause of freedom and democracy. It is not passivity, resignation or inactivity. There is nothing that lays the state’s violence more bare than the fact that our attitude is as forceful, massive and imaginative as it is peaceful.”

Tonight at Montserrat, the spiritual heart of #Catalonia, we remember all those in prison and in exile. And we continue to dream of a future where all is “luminous and possible.” #llumillibertat pic.twitter.com/dBbMxqxF2q

This September, seven more pro-independence activists were imprisoned under terrorism charges, following allegations of making and possessing explosives. Quim Torra has criticised the arrests as an attempt to spread a “false narrative of violence in Catalonia”.

To commemorate the second anniversary of the referendum, the 131 peaks of the Monserrat mountain in Catalonia were lit up by 150 pro-independence campaigners, who kept the lights shining from 8.30pm on 30 September until 8am on October 1.

The Annual General Meeting of Westminster’s All Party Parliamentary Group on 15 October, which is open to members of the public, will hear from Diana Riba MEP, representative of the Left Republican Party of Catalonia and wife of former Catalan Foreign Affairs minister Raül Romeva. Romeva has been imprisoned since May 2018 on charges of sedition and rebellion.