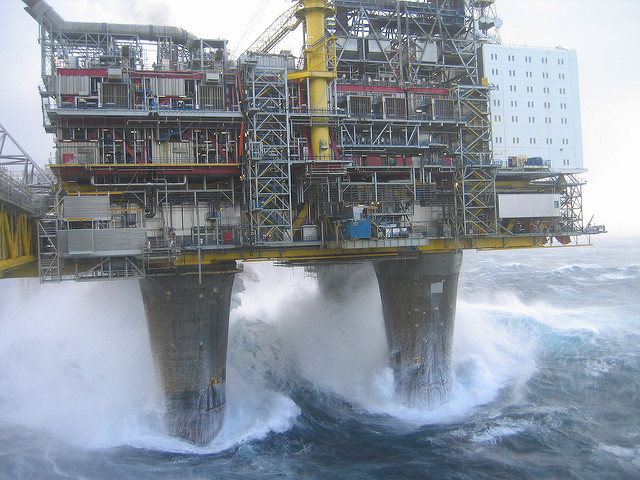 NEW UK ENERGY MINISTER Claire Perry has been harshly criticised by environmentalists and opposition politicians following her declaration that “We want to squeeze every last drop” of oil from the North Sea basin.

During her first visit to Aberdeen following her appointment as the UK Government’s Energy and Clean Growth Minister during last month’s cabinet reshuffle, Perry made the comments while attending the first Maximising Economic Recovery Forum, hosted by the Oil and Gas Authority. Perry also stated that oil reserves in the North Sea had been “underestimated”.

Perry said last Friday: “We want to squeeze every last drop at the right economic price out of the North Sea basin,” adding: “I think we’ve underestimated what we still have in terms of reserves.

“I wanted to talk about the future, but also to talk about what is going on here and now and I understand that this will be a highly productive industry for many years to come.”

Perry continued: “One of the exciting things was to understand that we are creating solutions here that solve our problems which are worth billions in terms of exporting, because the whole world is looking at questions of decommissioning and future transition.

“I was left feeling reassured that the industry is in a better shape – certainly financially – than it has been in a long time, also inspired about the level of thinking about the future and the opportunities to export and grow these products and services even further.”

However, Perry’s stated intentions regarding the North Sea sector were met with scepticism by the Kirsty Blackman, MP for Aberdeen North and the SNP’s economy spokesperson at Westminster.

Responding to Perry’s remarks, Blackman told CommonSpace: “For years the SNP has stressed the importance of this industry. Time after time I have been clear with UK Government ministers that they need to take action to secure the longevity and maximum economic recovery of our oil and gas reserves.

“Two years ago David Cameron came to Aberdeen and promised us an oil ambassador – they are yet to materialise.” SNP MP Kirsty Blackman

“It’s a shame it has taken the 20th energy minister in as many years to recognise successive UK Governments have underestimated Scotland’s oil and gas sector and the longevity of this North Sea industry. The only thing the Tories are consistent on is their gross mismanagement of the North Sea oil and gas industry, and once again we hear a lot of talk without the action needed to back it up. Two years ago David Cameron came to Aberdeen and promised us an oil ambassador – they are yet to materialise.

“We need urgent, real incentives for exploration and development of the North Sea, not shallow buzz phrases and photo-opportunities for yet another energy minister getting to grips with a new role.”

It is estimated by that somewhere between 10 and 20 billion barrels of oil remain in the UK Continental Shelf, the focus of the North Sea oil industry, which could be extracted. However, much of the sector is focused on decommissioning defunct oil rigs and installations in the coming years, and environmentalists have been consistent in their calls for both Scotland and the UK to move away from fossil fuels and place greater focus on renewables.

Commenting on Perry’s statements, Scottish Green energy spokesperson Mark Ruskell MSP told CommonSpace: “The so-called ‘Clean Growth’ minister’s comments are at odd with the prime minister, with Theresa may stating that clean growth is a ‘duty we owe to the next generation’.

“Given that the World Bank is ending its financial support for oil and gas extraction, it’s time for the UK government to take its obligation to lowering carbon emissions seriously.” Green MSP Mark Ruskell

“Given that the World Bank is ending its financial support for oil and gas extraction, it’s time for the UK government to take its obligation to lowering carbon emissions seriously and to make a clear policy shift towards ensuring that the renewables industry receives similar levels of financial backing as the oil and gas sector.”

Ruskell’s sentiments were echoed by some of Scotland’s most prominent environmentalist groups, who condemned Perry’s apparent focus on fossil fuels and the UK Government’s record on renewables.

Acting director of WWF Scotland Dr Sam Gardner told CommonSpace: “Just weeks after it was reported 2017 was the second hottest year on record, it is perverse for politicians to be talking about wanting to squeeze every last drop out of the North Sea.  Instead we need to see a just transition that enables us to harness the engineering skills currently deployed in the North Sea and apply them to supporting a range of cleaner forms of energy production.

“The rest of the world, with the exception of Trump, is looking ahead to a fossil free future after the Paris Agreement, and the UK needs to be doing the same.” Friends of the Earth Scotland climate and energy campaigner Caroline Rance

“To reduce the risk of dangerous global climate change, the vast majority of known fossil fuel reserves need to be left in the ground and not exploited.”

Climate and energy campaigner from Friends of the Earth Scotland Caroline Rance commented further, telling CommonSpace: “While these comments are unsurprising from a Government that has ditched support for renewables while forging ahead with fracking, they’re completely out of step with the need to move away from fossil fuels to meet our climate change targets.

“The rest of the world, with the exception of Trump, is looking ahead to a fossil free future after the Paris Agreement, and the UK needs to be doing the same.

“Instead of trying to ‘squeeze every last drop’ out of North Sea oil, the UK Government should instead be focussing their efforts on developing renewables and laying the foundations for a just transition to ensure that workers and communities currently reliant on North Sea oil are not left high and dry.”