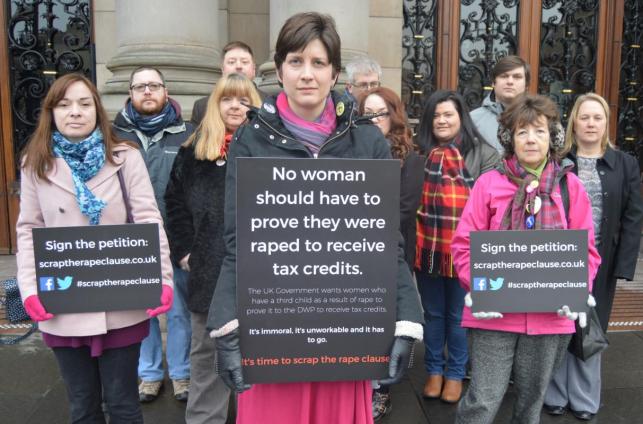 THE DEPARTMENT OF WORK AND PENSIONS’ latest attempted clarification of the controversial ‘rape clause’ has been dismissed by critics as insufficient and unclear.

The rape clause – which, as part of the two-child benefit cap, includes an exception which would force mothers of more than two children to prove that they were raped when their child was conceived in order to receive benefits – has been heavily criticised by charities, women’s groups and opposition politicians since its inception. The SNP MPs in particular have been consistent in their condemnation of the clause.

Responding to a 250,000 signature petition, the DWP has said it will operate a “third party model” in its application of the rape clause, meaning that women subject to it would not have to describe their experiences to DWP staff, but would instead discuss the relevant details with a healthcare professional, social worker or approved rape charity. However, charities remain unclear on how this would work in practice.

“It’s simply unacceptable that women are being forced to relive the trauma of rape simply in order to make a benefit claim.” SNP MP Alison Thewliss

SNP MP for Glasgow Central Alison Thewliss, who has been one of the most vociferous critics of the rape clause, said in response: “It’s blatantly clear from the updated response that the government has offered up to this petition that they still do not understand the damage that they are inflicting on women and families through their dogmatic commitment to the two child cap.

“Analysis by the Joseph Rowntree Foundation has shown that over 200,000 children will move into relative poverty by 2020 as a result of this repugnant policy.

“It’s simply unacceptable that women are being forced to relive the trauma of rape simply in order to make a benefit claim.

Thewliss continued: “Even with mounting criticism from charities, women’s aid groups and trade unions, it’s appalling that the government’s position on this matter hasn’t changed.

“What women and families need is for this policy to be abandoned in its entirety, not more hollow rhetoric from Whitehall that falls far short of addressing the problem.”

“The chancellor has an opportunity in this month’s budget to scrap this vile policy once and for all. I strongly suggest that he takes it.” SNP MSP Christina McKelvie

Christina McKelvie, SNP MSP for Hamilton, Larkhall and Stonehouse and convener of the Scottish Parliament’s Equalities Committee, also commented: “If the DWP think that this updated response brushes the issue under the carpet, they are sorely mistaken.

“The chancellor has an opportunity in this month’s budget to scrap this vile policy once and for all. I strongly suggest that he takes it.”

Regarding the latest update, a DWP spokesperson quoted by Third Force News said: “This reform ensures people on benefits make the same choices as those supporting themselves solely through work.

“But we have always been clear this will be delivered in the most effective, compassionate way, with the right safeguards in place.”