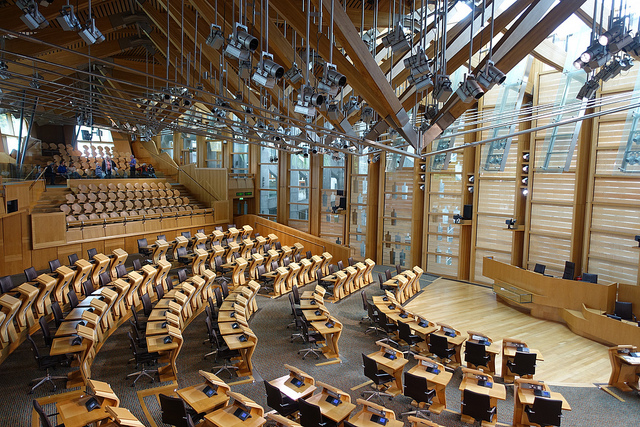 THE UK GOVERNMENT faced a backlash from MSPs over a letter which advised them they had twelve hours in which to read the leaked Brexit economic impact analysis, by appointment at a UK Government building in Edinburgh.

MSPs described the offer as “insulting”, particularly given their busy parliamentary schedule on Thursdays and constituency commitments on Friday.

A UK Government spokesperson backtracked on the limitations on Thursday night after Scottish Parliament presiding officer Ken Macintosh called on UK ministers to “reflect” on the concerns of MSPs.

MSPs have also been warned to keep the information strictly under wraps.

SNP MSP Joan McAlpine said that the limited timeframe proposed in letter was “completely insulting” and treated “Holyrood and the people of Scotland with contempt”.

She said: “We know from leaks at Westminster that the UK Government is pursuing a hard Brexit policy that its own analysis shows will wipe billions of pounds from the Scottish economy.

“Now they want to restrict the ability of MSPs to view this information and have ordered them not to reveal any of the contents to the public.

“They think a last minute invite to view the analysis they denied existed – at the other side of town, while parliament is sitting – is good enough. Well it isn’t.”

McAlpine said that the UK Government was treating MSPs as “second-class representatives” because it had been made clear that MPs could view the analysis at any time.

She added: “Remaining in the single market and the customs union is essential for the economy, jobs and living standards – something even the Tories can no longer deny and they must now release this evidence in full.”

Scottish Green MSP Ross Greer also said the proposal demonstrated “the Tories’ contempt for Scotland” and said he had only been able to read every second page of the document because the odd numbered pages were not available until later.

He said: “Given the massive economic damage this analysis predicts, it’s no surprise they’re making it as difficult as possible for us to know any more than what has already been leaked.

“It’s like the planning application from the Hitchhiker’s Guide to the Galaxy – in the cellar, with no lights or stairs and at the bottom of a locked filing cabinet in a disused toilet behind a sign saying Beware of the Leopard. Except this isn’t fiction.”

Scottish Labour MSP Neil Findlay commented: “This is an absolute nonsense, and takes no consideration of MSPs who have constituencies far from Edinburgh – or indeed the fact that Holyrood is sitting at those times on a Thursday. This is the shambolic Tory approach to Brexit summed up.”

A UK Government spokesperson has since said that the letter had meant that the papers would be available “from Thursday”, adding: “If MSPs would like to return to review the document at any point, including after recess, they would be very welcome to do so.”

The analysis papers were provided to committees of the House of Commons and House of Lords on Tuesday and made available to MPs in confidential reading rooms.

Minister for UK negotiations on Scotland’s place in Europe said that ministers had “refused to accept a copy on condition of secrecy”, having said previously that the public had a right to know what was in the analysis.

Russell said the confidential reading room was likely an “unsubtle response” to his position.