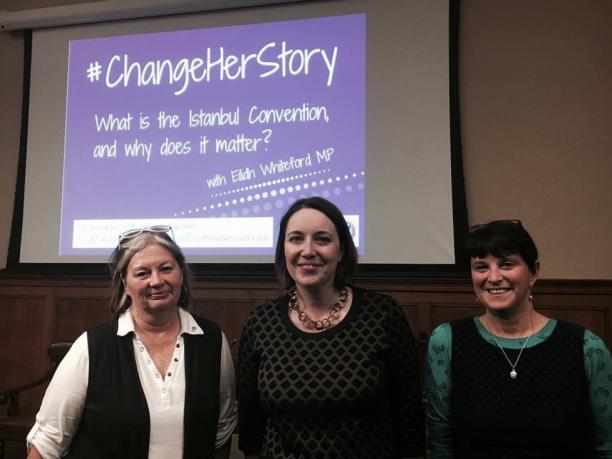 THE ADVISORY COMMITTEE which helped devise the bill to ratify in UK law the Council of Europe’s Istanbul Convention – which places a duty on states to meet a set of standards in working to end violence against women – has called on the UK Government to meet its fast-approaching deadline to set out a timetable for the process.

SNP MP Alison Thewliss has joined the committee in urging the UK Government to live up to its commitment to set out a report on the timetable for ratification by 1 November.

The Preventing and Combating Violence Against Women and Domestic Violence (Ratification of Convention) Bill was introduced as a Private Member’s Bill by former SNP MP Dr Eilidh Whiteford. It passed a vote 138 to 1 in the House of Commons in February this year, before passing in the House of Lords and coming into force on 27 June.

READ MORE: Explainer: What the Istanbul Convention is and why it matters

The Advisory Committee on the bill, which includes experts from the violence against women and legal sectors, released a joint statement this week in which it celebrated the bill’s successful passage “under the navigation of Dr Whiteford and Baroness Gale” and put pressure on the UK Government to act swiftly.

The committee said: “During the deliberations of the legislation, the Minister was clear that the UK Government would commit to laying a report to Parliament alongside an Oral Statement to allow for scrutiny of the timetable towards ratification of the Istanbul Convention.

“We look forward to the timely presentation of the report to Parliament, the Government must submit to both Houses with an Oral Statement to allow for all members to scrutinise progress ahead of the 1 November deadline.”

“The Istanbul Convention is quite simply the best piece of violence against women legislation in the world, and there must be swift action to protect women and girls across the country.”

The committee also noted that the UK Government’s proposed Domestic Violence and Abuse Bill, which relates to England and Wales, will include some of the changes required to ratify the bill, and called for clarity on how the same measures will be put in place for Scotland and Northern Ireland.

The statement said: “We welcome the announcement of the proposed Domestic Violence and Abuse Bill with the proposal to include the extraterritorial changes required to enable the ratification of the Istanbul Convention.

“However, as this will only cover England and Wales we are keen to learn what action is being taken in Scotland and Northern Ireland in relation to extra-territorial jurisdiction.”

SNP MP Alison Thewliss, who has been a strong supporter of bill, also urged the UK Government to “stop dragging its feet” on the issue. She said: “Eilidh Whiteford did a great thing in passing her Private Member’s Bill on the Istanbul Convention, and ensuring commitment to the issue from the UK Government.

“Too many women and girls still live in fear of frequent violence and intimidation at home and abroad. Ratification of the Istanbul Convention sends an important signal that the UK Government is willing to step up to the mark in the fight to end violence against women and girls.

“With the 1st November deadline fast approaching, I urge the UK Government to stop dragging its feet, and to make good on its promise to ratify the Istanbul Convention and improve the lives of women and girls across the country”.

The only MP who voted against the bill was Philip Davies, Tory MP for Shipley and self-described “meninist”, who attempted to filibuster the bill with a 91 minute speech.