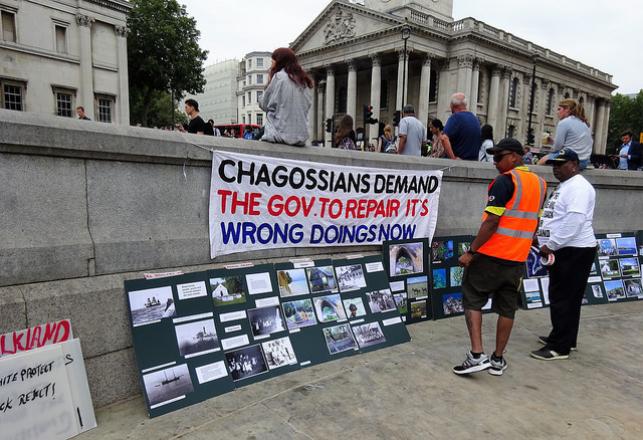 THE UNITED NATIONS has demanded that the UK end its “colonial administration” of the Chagos Islands and return the archipelago to Mauritius within six months.

The UN General Assembly yesterday [22 May] voted by an overwhelming 116-6 in favour of a resolution endorsing the conclusions of the International Court of Justice (ICJ) earlier this year, which found that the creation and continued control over the Chagos Islands by the UK was illegal.

The UN vote adds further credence to the arguments of Mauritius’ lawyers, who argued before the ICJ that the 1965 separation of the Chagos Islands from Mauritius – a condition of its independence from British control – was in breach of UN resolution 1514, passed in 1960, which prohibits the partition or breakup of colonies prior to their independence.

According to some estimates, between 1,500 and 2000 Chagossians were deported from their homes by the UK to Mauritius when the Diego Garcia was leased to the US. Since then, the Chagos diaspora has scattered across several countries, and are forbidden by law from returning to the archipelago, and can only do so once British rule comes to an end.

While both the court’s ruling and the General Assembly’s resolution are not non-binding, they have nevertheless been widely perceived as a humiliating defeat for the UK, which mustered little support in its opposition to the resolution, with only Australia, Hungary, Israel, the Maldives and the United States voting in its favour.

This was despite intense pressure from the United States, which maintains the Diego Garcia military base on the Indian Ocean Islands. The Guardian newspaper has reported that Washington had campaigned aggressively both at the UN and in direct talks with national capitals around the world in defence of the UK’s continued control over the ‘British Overseas Territory’.

Despite being left diplomatically isolated, the UK’s UN ambassador Karen Pierce told the assembly: “British Indian Ocean Territory has been under continuous British sovereignty since 1814. Mauritius has never held sovereignty over it and we do not recognise their claim.”

Following the vote, a spokesperson for the UK Foreign Office stressed the security implications of maintaining British control, saying: “The joint UK-US defence facility on the British Indian Ocean Territory helps to keep people in Britain and around the world safe from terrorism, organised crime and piracy. As the US Government has made clear, the status of BIOT as a UK territory is essential to the value of the joint facility and our shared interests – an arrangement that cannot be replicated.”

“The advisory opinion is clear and unambiguous. It is decisive.” Mauritius Prime Minister Pravind Jugnauth

The spokesperson continued: “We remain disappointed that this matter was referred to the international court of justice and the UN general assembly. The basic principle that the ICJ should not consider bilateral sovereignty disputes without the consent of both states concerned has been circumvented and this could have wide-reaching implications for all UN member states.”

Commenting in the aftermath of the vote, Mauritius Prime Minister Pravind Jugnauth said that his country is “extremely disappointed” by the UK Government’s position, commented: “The advisory opinion is clear and unambiguous. It is decisive.”

Jugnauth argued that the 1965 agreement was “carried out under duress”, and described the forced eviction of the Chagossians as “a very dark episode of human history akin to a crime against humanity.”

Jugnauth added that decolonization of the former British Empire had not been completed, nor would it be until the Chagos Islands were returned its native peoples, saying: “This is a sacrosanct principle of the United Nations.”