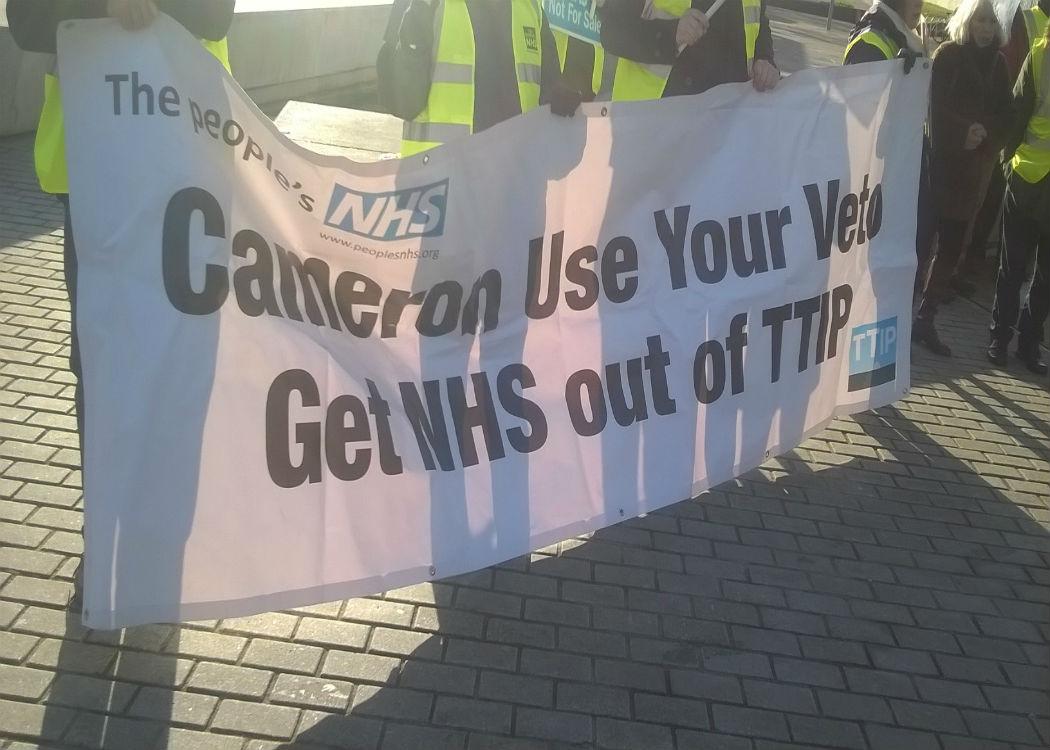 Lord Livingston says those who don’t believe public services will be protected from TTIP “must believe the UK, EU and US authorities are all liars or incompetent”

THE UK Trade Minister has insisted at the Scottish Parliament that the NHS and public services as a whole “are excluded” from the TTIP trade deal currently being negotiated between the EU and the United States.

The evidence from the UK Government minister for trade, Lord Livingston of Parkhead, came as People’s NHS campaigners protested outside the parliament, encouraging MSPs to support a pledge for the NHS to be vetoed from TTIP.

TTIP (The Trans-Atlantic Trade and Investment Partnership) is a trade deal between the EU and the US which is being negotiated in secret, but has been described as ‘the biggest free trade deal in history’. Critics say it could undermine public services, workers rights and food and safety standards, boosting corporate power over the economy.

Particular concern has been levelled over what TTIP could mean for the NHS. Unite has published a document by a legal expert arguing that health services are not currently exempt from the TTIP negotiations.

“Public services are not included in TTIP. The NHS will carry on as it is.”

Livingston refuted this, telling Holyrood’s European and External Relations Committee: “Public services are not included in TTIP. The NHS will carry on as it is.”

Livingston added: “The UK Government is very sure the NHS is not included, so is the EU Commission. I haven’t met another country around Europe that wants their public health services included in TTIP.

“Unless the EU, the US and the UK Governments are all lying, I think we can come to the conclusion that public services is not part of it… Publicly funded services are excluded.”

The view contrasted with that of the campaigners outside, who chanted: “Lord Livingston get a grip, NHS out of TTIP.”

The People’s NHS campaigners said SNP, Labour, the Greens and the Independents were all signed up to the pledge, leaving the Liberal Democrats and the Tories as the only parties without signatories to the pledge at Holyrood.

Linda Clark, People’s NHS campaigner and former NHS worker, told CommonSpace: “TTIP will affect workers rights, food standards, lots of aspects of our society, but what we’re focusing on is the NHS because it’s so important to our society.

“I think this is a campaign we can win. When I started getting involved in this a year ago hardly anyone knew what TTIP was, but now everyone knows about TTIP, and has really gained a head of steam.”

“The NHS is the greatest health institution in the world and it has to be protected.

Donald Spence, who works for the NHS, was part of the demonstration, and said: “TTIP is all about money, and privatising public services, and the NHS. We’ve seen across the world countries that are fined in international courts for not allowing privatisation to happen.

“The NHS is the greatest health institution in the world and it has to be protected. I speak to fellow NHS workers about it, and they are terrified. They want to work for the people, not some global corporation.”

Bob Doris, SNP MSP for Anniesland, said: “I want the NHS out of TTIP. It shouldn’t be subjected to market competition. We don’t want the market to compromise the founding principles the NHS was built on, and the Scottish Government is absolutely clear about that.”

Doris added that TTIP could be a threat to all public services, and the SNP team of MEPs in the European Parliament would be “paying close scrutiny to that”.

“I’ll be guided by the evidence,” Doris added. “If I believe TTIP will undermine other public services I will oppose that too. We need to be cautious about all of it, and look at the evidence.”

Doris said it was an uphill task to convince “a UK government that doesn’t like to listen”, but he was optimistic because “there’s a General Election coming up, and that tends to focus politicians minds”.

Rhoda Grant, Labour MSP for the Highlands and Islands, also joined the demonstration, and told CommonSpace: “It’s vital to keep the NHS in public hands. Trade deals are a good thing but they have to be fair and not undermine public services.”

Grant said that even Tories in Scotland “appreciated that there was dangers with TTIP”, but added that with the General Election coming up “it’s a chance to elect a government that will ensure the NHS is protected”.

Livingston insisted that those who believe TTIP does endanger public services are spreading misinformation, adding that he “worried the NHS is being used as a political football, when we should be trying to get a good trade deal”.

“If there’s a lack of clarity, I’m happy to have that conversation – but the conversation should start from the fact that there’s no intention of any party to include public services. Unless they are all either liars or incompetent,” Livingston said.

Livingston accepted that some sectors of the UK economy would be “losers” from TTIP, but said the free trade principle of the deal “enhances overall prosperity”.

“If there’s a lack of clarity, I’m happy to have that conversation – but the conversation should start from the fact that there’s no intention of any party to include public services. Unless they are all either liars or incompetent.”

A controversial aspect of TTIP has been the Investor-State Dispute Settlement (ISDS), which would empower international corporate courts to take decisions over trade disputes between corporations and nation-states, with no recourse for appeal if states lose.

Livingston said the UK Government still supports an ISDS clause being in the TTIP agreement, which has been opposed by the French and German governments and is not part of the current TTIP negotiations.

Livingston said he believed ISDS can be improved, but supported the principle of it.

TTIP recently faced a blow when the new Greek Government led by radical left party Syriza stated it would not ratify the trade deal (click here to read more) while it is in power. All EU member states have a veto on the TTIP agreement.

Later, a ‘TTIP summit’ will take place at Holyrood to discuss further the proposed trade deal, hosted by Christine McKelvie, chair of the European and External Relations Committee.