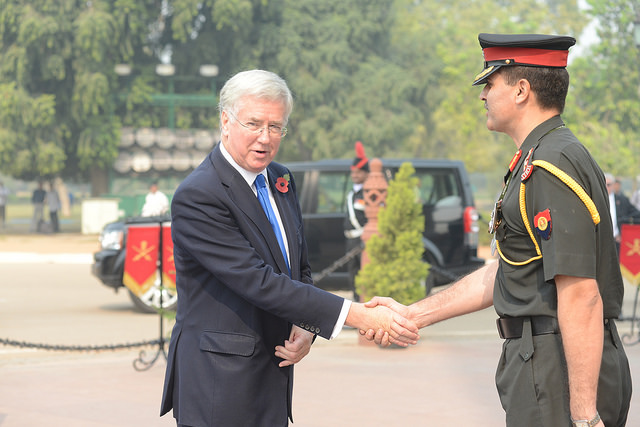 A campaign group has slammed the UK Defence Secretary Michael Fallon, after he said Britain will boost it’s global arms sales after Brexit.

Speaking at the Defence and Security Equipment International (DSEI) in London, Fallon claimed the UK would “spread it’s wings across the world” post Brexit in weapon sales.

But Campaign Against Arms Trade (CAAT) say the speech shows the UK Government could sell weapons to countries with poor human right’s records.

“What Fallon really means is that the government wants to sell even more weapons to despots, dictatorships and human rights abusing regimes around the world.” Campaign Against Arms Trade

Andrew Smith of Campaign Against Arms Trade (CAAT) said: “When Michael Fallon tells a room of arms company representatives that he wants the UK to spread its ‘wings around the world’ then it creates a chilling prospect.

“What Fallon really means is that the government wants to sell even more weapons to despots, dictatorships and human rights abusing regimes around the world.

“UK arms are already playing a central role in the devastating bombardment that has been inflicted on Yemen.

“How many more people need to be killed before Fallon and his colleagues stop putting arms sales ahead human rights?”

The DSEI event in London is the world’s largest arms fair where Fallon addressed the crowds which contained 1,600 exhibitors from 54 countries selling weapons.

During a his key note speech, Fallon claimed the UK was not the second biggest arms trader in the world.

Fallon said the UK obtained £5.9 bn from weapon sales last year and demand has increased following the surge in terror attacks around the globe.

He even claimed the UKs sales had gone “through the roof.”

The Indépendent reports that Fallon addressed a room that included military commanders, he said: “As we look, exiting the European Union, to go increasingly global, we see our equipment as a platform for even stronger partnership,”

“As we look to life post Brexit and spread our wings further across the world, it’s high time we do more to compete for a share of this international export market.”

But the government has been criticised for selling weapons to countries such as Saudi Arabia, which has been accused of committing war crimes in Yemen.

“We have called for a suspension of arms sales to Saudi Arabia because of the what the Saudi regime is doing.” Jeremy Corbyn Spokesperson

Reports also suggest Fallon refused to answer when asked if the UK would stop training the Burmese army, after it was accused of ethnic cleansing by the UN for burning Rohingya Muslim villages.

Despite assurances from Liam Fox that UK arms deals were protected by “robust safety measures” not to breach international law, critics rounded on the governments weapon sales record.

A spokesperson for Labour leader Jeremy Corbyn said: “We have called for a suspension of arms sales to Saudi Arabia because of the what the Saudi regime is doing, and its role in Yemen and the large scale human rights abuses that have taken place.

“We want to see the existing rules and conditions on arms sales strictly adhered to, more strictly than they are now, and for that to govern how the arms trade operates.”

Around 100 protesters have reportedly been arrested outside of the controversial arms fair.