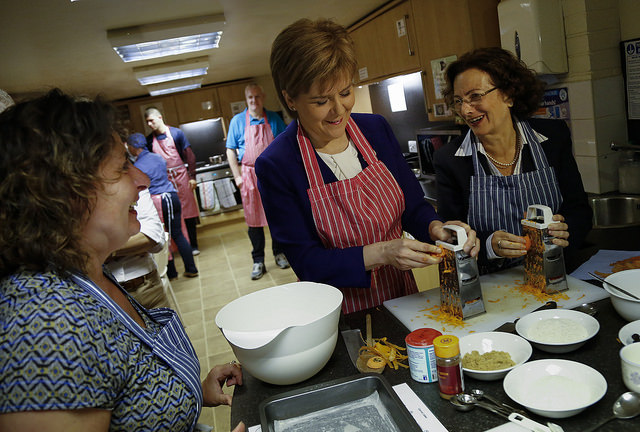 Scotland’s social security powers are limited, but experts argue there are actions which could be taken to address food poverty

EXPERTS AND campaigners have pointed to answers within the grasp of the Scottish Government which could help turn the tide on rising poverty figures amid Tory cuts to social security and the roll-out of the widely criticised Universal Credit.

New figures released this week reveal that The Trussell Trust distributed 17 per cent more three-day emergency food packages to people in Scotland in 2017-18 than the year before, compared to a 13 per cent increase in the UK as a whole. 55,038 of these packages were distributed to children, of a total of 170,625.

So within the constraints of devolved powers, what can the Scottish Government do to address this growing poverty crisis?

Currently, the Scottish Government provides 285,000 households with grants through the Scottish Welfare Fund, administered by local authorities. This includes Community Care Grants, which help people to live independently, and Crisis Grants, which provide a safety net in a disaster or emergency.

A third of these recipients were families with children, and 83 per cent of Crisis Grants were made as a result of “emergency need” to cover costs such as food and heating. Between October and December 2017, 27,570 Crisis Grants were awarded, representing a six per cent increase on the same quarter in 2016.

The Scottish Parliament is also set to pass the Social Security Bill in parliament today [25 April] which will establish Scotland’s own social security system, but its powers remain financially and constitutionally restricted.

Polly Jones, project manager of A Menu for Change, a partnership project to address food poverty led by Oxfam Scotland, Poverty Alliance, Nourish Scotland and Child Poverty Action Group Scotland, told CommonSpace the UK Government’s introduction of Universal Credit was at the heart of the issue, while Paul Spicker, emeritus professor of public policy at Robert Gordon University, described the state of the UK welfare system as the “overwhelming problem”.

However, campaigners and academics did argue that there are some concrete actions which can be taken in Scotland to tackle poverty. CommonSpace examines what they are.

Under the Scotland Act 2016, the Scottish Parliament has been transferred powers over eleven benefits, including disability benefits, Carer’s Allowance, and Winter Fuel and Cold Weather Payments, and the power to create benefits and top up existing ones. That being said, Paul Spicker, who authored a paper for Common Weal on Scotland’s new social security powers, said the scope of these powers was limited, but that there were steps that could be taken.

For example, Spicker said, the justice system in Scotland, which is devolved, could ensure people are treated fairly with regards to benefits sanctions, which have been found to be linked to increased foodbank use.

“Suspension used to be up to six weeks, then it went up to six months, now it’s up to three years – and we have a situation where decisions are being made without a hearing.

“It’s open to the government to start looking at that process, which is breeching longstanding principles, and ensure that people do have a hearing,” he said

However, he argued, there was scope for this to allow substantial action on the Scottish Government’s part. “Personally I’d say being denied benefits illegally is exceptional, and on that basis any benefit system not subject to a hearing is exceptional.”

The enforcement of high interest payments on debt, Spicker said, was another issue which may push people into poverty and which the Scottish justice system could choose not to enforce. “I think that can be done effectively without requiring major resources, and there are a couple of precedents to this, such as delaying the eviction of tenants,” he said.

Another possibility, Spicker said, was that the Scottish Government could extend the “emergency and discretionary” grants available to people through local government schemes, such as the Scottish Welfare Fund.

Polly Jones of A Menu for Change agreed that more support could be given to the SWF, particularly in terms of staff to ensure that it is administered effectively. A further action the Scottish Government could take, Jones suggested, was to do more to ensure people make use of the “Scottish flexibilities” under Universal Credit.

The policy, introduced by the Scottish Government, allows tenants in the private or social rented sector to choose to have the housing element of Universal Credit payments made directly to landlords.

“They have used devolved powers to put a small amount of resource into this, but they could do much more,” Jones said. “At the moment it’s a one time only pop-up comes up after the second payment.”

Jones said it was also important that people have access to benefits advice and support services, particularly amid changes to the Universal Credit system.

“The number of advice services is shrinking – local authorities, Citizen’s Advice Bureaus and independent advisors are all reporting that they are really struggling,” she said, adding that the Scottish Government should invest more into these services.

Food: A “right to food” and free school meals in holidays

Writing on CommonSpace in response to the new foodbank figures, head of policy and research at Common Weal Craig Dalzell said it was possible to use policies beyond social security to address the issue: “We shouldn’t be trammelled in our thinking and restrict ourselves to only thinking about mitigating the latest round of cuts.”

Part of this, he said, would be to “change fundamentally” how we think about food, by introducing a “Right to Food” as a government responsibility. One demonstration of this, he said, could be an expansion of free school meals to cover holiday periods, a policy which has already been implemented by North Lanarkshire Council. Another would be by “directly funding foodbanks and turning them into community food hubs – open to all”.

By making use of the Scottish National Investment Bank, Dalzell said the Scottish Government could take innovative actions such as creating a National Distribution and Export Company which would support local producers and help reduce costs.

READ MORE: Dr Craig Dalzell: The surge in food poverty must be stopped – here’s some ideas for creating food security

Polly Jones noted that the Scottish Government had been “very serious about food insecurity for some time”, having established a short-life working group on the issue in 2015. This, she said, was something which the government should expand on, as well as supporting the introduction and passage of a Good Food Nation Bill.

Such a bill has been campaigned for by food rights activists in Scotland, who echo Dalzell’s wish to see a right to food enshrined in law. “There is already a really vibrant network of local food promoters and the Good Food National Bill would really support that,” Jones explained.

“One of the reasons this project [A Menu for Change] exists is there are so many great organisations around Scotland which have reduced the number of people needing to go to foodbanks. Good Food Nation is about creating a coordinated strategy for food rather than having it left to local initiatives.”

Jones said that there was clear evidence that “better coordinated local action can make a very real difference” to food insecurity, so support for such approaches to expand could be vital.

Research commissioned by the Trussell Trust last year found that rising housing costs were one of the key factors leading to people struggling to meet the cost of living. Scottish Government data released in November showed that private rents had increased by at least four per cent in all property sizes since the previous year.

Craig Paterson of the tenants’ union Living Rent told CommonSpace that rent controls could be one solution to reduce the number of people facing poverty. “With housing costs being the biggest outlay for most people it is no wonder we are seeing record foodbank use, the cost of renting has spiralled out of control with some people now paying up to half their income in rent,” he said.

“We desperately need rent controls to prevent what is already a tragedy from turning into a full blown disaster, as more and more people struggle to pay their rent and survive.”

The Scottish Government has introduced rent pressure zones which local authorities can apply for in areas where rents are rising rapidly, but the zones only restrict rent rises to one per cent above inflation and no area in Scotland has introduce an RPZ yet. Paterson called for a comprehensive rent control system.

The Scottish Government has promised to build 50,000 affordable homes by 2021, but campaigners say there is an urgent need for greater provision of public housing.

Alison Watson, Deputy Director of Shelter Scotland, said the number of people accessing Crisis Grants revealed “the daily struggles of tens of thousands of households across Scotland to make ends meet and keep a roof over their head”.

“Harsh welfare reforms, the roll out of Universal Credit, zero-hours contracts, stagnant wages and the high cost of housing are behind these figures and cause ongoing misery and uncertainty and contribute to the growing levels of poverty in Scotland.”

Watson said that, while the fund in itself was a “vital safety net”, more had to be done to tackle the root causes and “create a fairer and more just society for everyone”. Halting the roll-out of Universal Credit, she said, was an important part of this, but also noted that housing was an area where action could be taken in Scotland.

“A major increase in the supply of truly affordable housing in places where people want to live would be a good start,” she said.