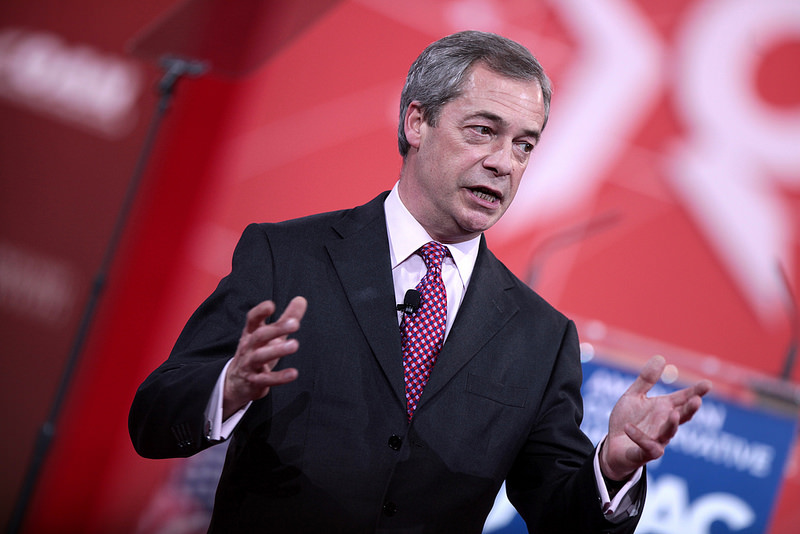 THE ANTI-EU campaign group backed by Nigel Farage during the EU referendum has been condemned after a series of Islamophobic tweets from its official Twitter account, including one on the supposed “Punish a Muslim” day.

Some of the claims made by the group have also been debunked and labeled as fake news.

In one tweet, the group posted a picture of London mayor Sadiq Khan next to the words “Londonistan” with the caption: “British multiculturalists feed Islamic fundamentalism.” 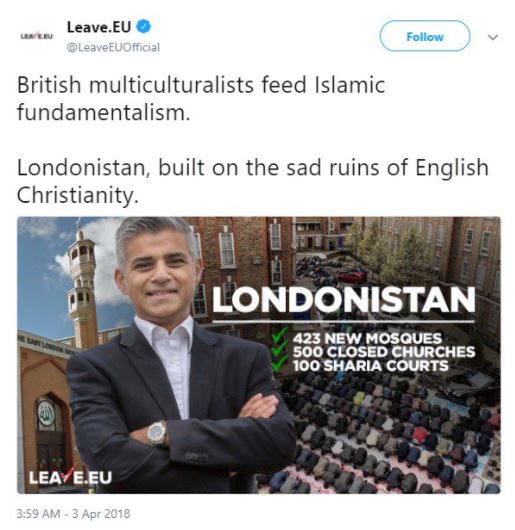 The image of Sadiq Khan was posted on 3 April, the same day advertised in anonymous A4 posters as “Punish a Muslim” day which claimed to give points to individuals who carried out attacks on Muslims.

Leave.EU also made a series of claims in the images, suggesting that 423 new mosques had been built and 500 churches closed in London since the election of Sadiq Khan as mayor.

All of the claims were later debunked by the fact-checking website Snopes, which said the information, based on research by the right-wing think tank the Gatestone Institute, used “misleading and cherry-picked data about the number of churches and mosques in London”.

An unofficial campaign to leave the EU, the group was supported by the former Ukip leader Nigel Farage and funded largely by the Ukip donor Aaron Banks.

The original post has now been deleted by the group, who acknowledged that their information was inaccurate but disagreed with claims that it was Islamophobic.

The campaign said: “Why is discussing Muslims and the real issues racist? Are we not allowed to discuss the Muslim issue or anti-Semitism? Both are real problems that are conveniently brushed under the carpet yet they remain the elephant in the room.

In another post, which remains on the groups feed, Leave.EU appeared to link claims of antisemitism in the Labour party to a reliance on “Muslim votes”.

Is it any wonder that Labour can’t be bothered to deal with the disgusting antisemitism in their party when they are so reliant on the votes of Britain’s exploding Muslim population? It’s a question of maths for these people, not justice!

The group posted: “Is it any wonder that Labour can’t be bothered to deal with the disgusting antisemitism in their party when they are so reliant on the votes of Britain’s exploding Muslim population? It’s a question of maths for these people, not justice!

The image accompanying the tweet showed a see-saw with a block reading “3 million Muslim votes” on one side and one saying “300,000 Jewish votes” on the other, alongside the caption: “Turkeys don’t vote for Christmas.”

Muslim Engagement and Development (MEND), which seeks to tackle Islamophobia across the UK, condemned the posts on social media.

MEND CEO, Dr Shazad Amin, said: “MEND is appalled by the clearly Islamophobic tweets which are creating division and hatred between the Muslim community and other faith communities. Islamophobia and anti-Semitism needs to be taken seriously and tackled by the whole of society, not used to score cheap and tawdry political points.

“We hope and expect an apology is forthcoming”.

Labour MP David Lammy said he had reported the post to the police.

A spokesperson for Nigel Farage refused to comment when contacted by CommonSpace.