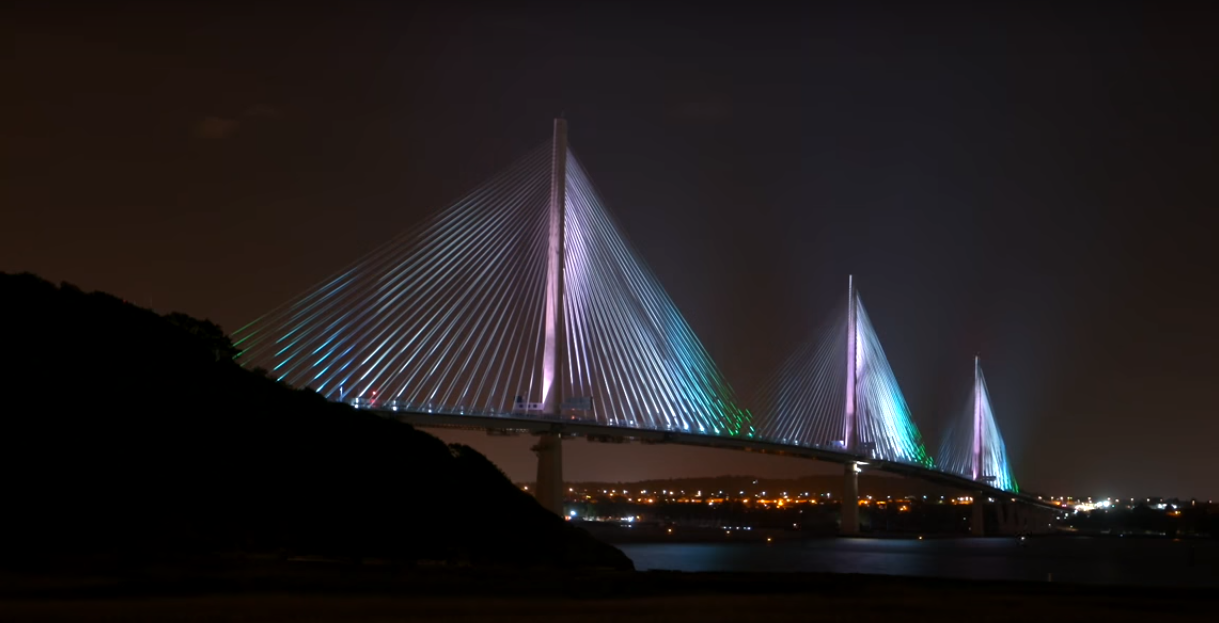 SIX years on from construction commencing, the Queensferry Crossing will open to the public for the first time tomorrow (30 August).

The bridge across the Firth of Forth is now the tallest in the UK, at 208 metres high, using 23, 000 miles of cabling and spanning 1.7 miles. The Crossing joins the Forth Road Bridge and Forth Rail Bridge to make up a trio of bridges over the river, connecting Edinburgh to Fife.

First Minister Nicola Sturgeon, at a ceremony last night in which the bridge was let up to mark the handover of the bridge from contractors to the Scottish Government, said: “Design, engineering and construction – in its own right it is absolutely amazing.

“But when you put it into the context of these two other amazing bridges, what you have done here is create something truly special.”

Plans to develop Queensferry Crossing were set in motion 10 years ago, after weakness in the Forth Road Bridge was identified. Construction began in 2011 and was intended for completion by December 2016, but there were a number of weather-related delays. Now ready to open, the £1.35bn bridge has come in at almost £250m under budget and is expected to last for over 100 years.

Scottish Government Economy Secretary Keith Brown, said:  “It will be with a real sense of pride that all those involved with this project will witness traffic crossing the bridge this week.

“To think that the crossing has been completed six years from the date construction started and ten years since Parliament approved legislation is a remarkable achievement for a project of this scale and complexity.

“The challenges of this location have been well-documented and the real heroes are those who have braved the elements in sometimes horrendous conditions to finish the job.”

“This project has released £245m of savings back into the Scottish Budget since construction began. Quite often we see and hear of projects running significantly over budget, so I believe we should be proud of this achievement and take confidence going forward.”

Over 15,000 people worked on the construction site over the past six years, with over 18 million hours of work involved in the process.

Over 15,000 people worked on the construction site over the past six years, with over 18 million hours of work involved in the process. Two workers died during construction of the new bridge – John Cousin was hit by a crane, and Wullie McColm had a heart attack on the bridge and later died in hospital.

A petition has been set up calling for a memorial at the bridge for the two men. A Transport Scotland spokesman has said that Forth Crossing Bridge Constructors are in talks around creating a suitable memorial. A memorial was installed at the Forth Road Bridge in 2012 to commemorate the 73 men who had died working on the bridge in the 129 years since its construction began.

The bridge will open to traffic for the first time tomorrow before closing for another week to make way for ceremonial events. Over the weekend, around 50,000 people who won tickets from a ballot will have the opportunity to walk across the new bridge, before the crossing is officially opened by the Queen on Monday.

The Forth Road Bridge will continue to be open for use by lighter traffic.