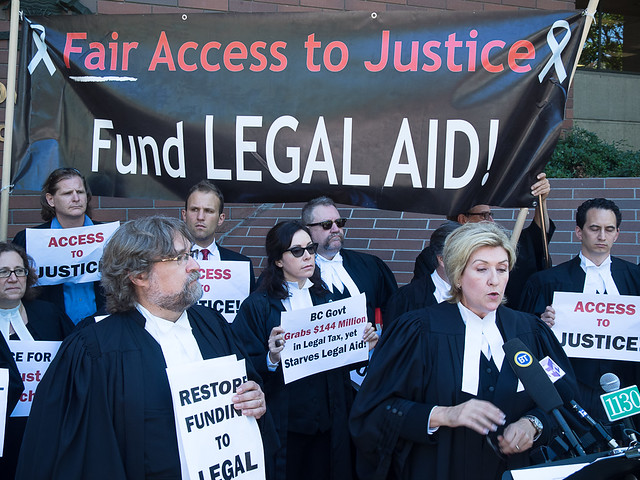 A SCOTTISH SOLICITOR has branded the current state of legal aid funding “quite simply, wholly unacceptable”, in response to the consultation on legal aid announced by the Scottish Government today [27 June].

Legal aid is a source of public funding available to give people access to legal assistance. The fees for legal assistance that a lawyer can charge are set as part of the legal aid budget which is administered by the Scottish Legal Aid Board.

The Scottish legal aid system has not faced the swingeing cuts applied in England and Wales by successive Tory governments implementing austerity policies. The legal aid budget in Scotland has been frozen in recent years at £126.1m. This cash terms freeze has led to a fall in pay for legal aid lawyers. Factoring in inflation, the total legal aid budget would need to be £141.2m to maintain the same level of funding in real terms.

Eamon Keane, a solicitor and the Convenor of the Scottish Legal Action Group, said: “There has to be recognition from the Scottish Government that the availability of legal aid in certain cases and the rates of pay available for certain types of work is quite simply, wholly unacceptable.

The public consultation announced today will look at ways to make the complicated legal aid system more “user-focused, flexible and valued as a public service” and will run to September 19.

The Evans review published in February 2018 and chaired by Carnegie UK Trust chief executive Martyn Evans provides the foundation for the consultation. The review found that the Scottish legal aid system performs well when compared to other similar countries and recommended simplifying the legal aid process but did not recommend increasing legal aid funding.

Dr. Nick McKerrell, Lecturer in law at Glasgow Caledonian University, also criticised the Scottish Government’s approach to legal aid funding, telling CommonSpace: “It is positive to see a radical review of any aspects of our legal system but not if it is seen as a way of removing money from the legal aid budget which has already faced major cuts in the age of austerity.”

McKerrell did see some signs for positive change in the public consultation announcement.

“Whilst [the Evans review] rejected the idea of increasing fees for traditional legal aid it put forward some quite radical ideas on expanding funding to the broader concept of “legal assistance” which could be paid to broader categories of representatives – advice workers, mediators even legal educators,” he said.

However, McKerrell warned that these “radical ideas” might amount to a simple cost cutting exercise.

“As there is not a lot of money about this would amount to a re-distribution of resources within the sector – and a move away from traditional solicitors… Cynically it could look like the Scottish Government are investigating the possibility of funding cheaper options than full blooded court actions,“ he said.

Keane also welcomed structural changes to the legal aid system if they make it simpler.

“The consultation provides an opportunity to simplify the system,” he said. “The reality of providing legal aid as a solicitor would astound most members of the public. The system is at present massively overly complicated, time consuming and bureaucratic.”

He also pointed to how legal aid has become an increasingly difficult issue to consider because of tabloid reporting.

Keane said: “Legal aid lawyers are routinely vilified by the tabloid press and lamentably certain politicians in this country have also made remarkably misguided comments in the past, with the result that the public’s understanding of this topic has been distorted.”

In March this year Tory MSP Liam Kerr spoke in outrage against the legal aid granted to the murderer of Alesha Mcphail during a session of the Scottish Parliament in Holyrood.

Keane concluded: “Quite simply, the reality is that legal aid lawyers work tirelessly in this country for remarkably poor remuneration (and often undertake vast swathes of work on a case for free). If this consultation leads to a less complex and fairer system of legal aid provision that would be a positive outcome”.

Citizens Advice Scotland help and advocate for hundreds of thousands of people every year, many of whom rely on the legal aid system. Their spokesperson, Gillian Fyfe, said: “Citizens Advice Scotland welcomes this public consultation to inform the design of a new framework for the regulation of legal services prior to the introduction of a legal services Bill. We will continue to work with stakeholders to ensure that the interests of consumers are at the heart of the regulatory and complaints system for legal services and that the vital role of the CAB service in assisting clients to access justice is recognised and supported and not negatively impacted by any changes to the system of regulation.”

CommonSpace is entirely funded by small, regular donations from you: our readers. Become a sustaning supporter today.