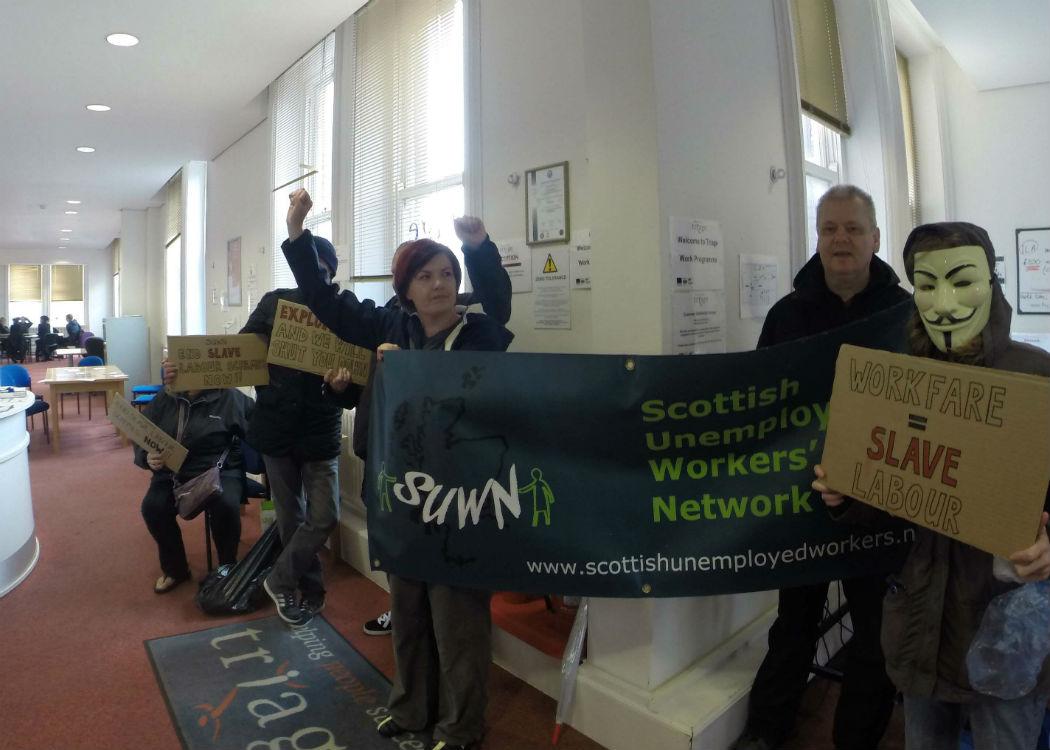 AROUND 10 activists from the Scottish Unemployed Workers Network (SUWN) occupied the Dundee offices of Triage, a company which claims to be the leading workfare sub-contractor in Scotland.

Workfare refers to unemployed people having to work for free in order to remain on jobseekers allowance. If they refuse to they can get sanctioned or lose their benefits. Triage operates as a sub-contractor which finds companies for the government which are willing to take people on workfare. It was introduced by the coalition government in 2011.

The occupation by unemployed activists this morning [17 July] lasted for about an hour, and the group, which provides an advocacy service for unemployed people as well as campaigning, released a statement saying Triage was “central to the punishment regime faced by unemployed workers in Dundee”.

“It is a private company making hundreds of thousands of pounds by adding to the pressures on people already suffering from stress and poverty,” the statement continued. “The draconian rules come from Westminster, but it is companies like Triage that put the rules into action.

“This occupation is a protest against sanctions and slave labour and the whole punitive regime of which they are part. It is also a message to Triage and similar companies that if they take part in this brutal exploitation of people’s misery they will be named and shamed and disrupted. If you exploit us, we will shut you down.”

Sarah Glynn, a housing author and expert who was part of the occupation, said that Triage were one of the worst for encouraging sanctions on the unemployed.

“Triage tell DWP to sanction ppl who havent turned up when they haven’t even recieved a letter asking them to turn up, or they recieved the letter after the date they were supposed to turn up,” she said.

“So not only does the system itself abuse peoples rights, but Triage are even abusing the abusive system. There is alot of fear out their of being sanctioned for something totally out with their control.”

The Triage holding message on its phone makes the claim that it is the biggest workfare sub-contractor in Scotland.

Grace Kennedy, Managing Director of Triage Central said*: “We strongly reject the suggestion that anyone is put into pointless or unpaid work. We’re very proud of our innovative approaches to employment and training that works both for individuals and the companies looking to employ them.

“We work with some of the largest employers in the country to offer people who have been unemployed find good, sustainable jobs. In Dundee we have had a number of success stories with many people securing work in the construction sector on major local projects and in the hospitality and retail sectors.

“At Triage Central we specialise in providing support, training, work preparation and job opportunities to help people in receipt of benefits progress back to into work. We operate under strict guidelines issued by the DWP and does not have the gift to stop or start anyone’s benefit.”

*This quote was recieved after initial publication of the article