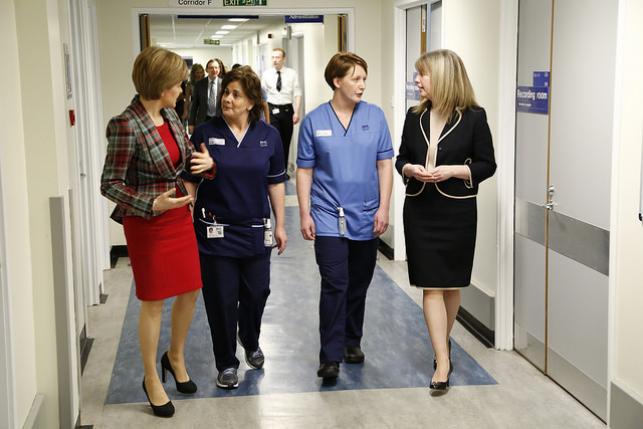 FOLLOWING yesterday’s revelation that First Minister Nicola Sturgeon’s new programme for government will include an end to the public sector pay cap, the response from the Scottish trade union movement has so far been both optimistic but unsatisfied.

“The cap will go from next year and future pay policy will take account of the cost of living. We need to ensure that future pay rises are affordable, but we also need to reflect the circumstances people are facing, and recognise the contribution made by workers across the public sector.”

The end of the pay cap is expected to increase the take-home pay of hundreds of thousands of public sector workers next year.

“Public service workers’ pay continues to fall below the rise in the cost of living. Rather than waiting until next year, government should act now.” STUC General Secretary Grahame Smith

Grahame Smith, General Secretary of the Scottish Trades Union Congress, welcomed the move but warned that the issue was not yet resolved, saying: “Whilst there finally appears to be some movement from government on the pay cap, this is only the beginning of the fight to restore workers’ pay. The average public service real terms wage has fallen by over £3,000 since the 2010 crash.”

Reflecting on the split in Theresa May’s Conservative government on the issue of the pay cap, Smith said: “The turmoil in the cabinet over public sector pay reflects the fact that the current situation is completely unsustainable.

“Public service workers’ pay continues to fall below the rise in the cost of living.  Rather than waiting until next year, government should act now.

“The Scottish Government should build on its announcement by making clear that it expects all public bodies to agree pay increases which exceed the rise in the cost of living. It must provide sufficient funding tied to these pay rises to ensure this takes place.”

Smith also said that the Scottish Parliament’s new powers over tax and welfare had benefited the Scottish economy, as above inflation pay awards had increased.

“Retaining more income tax and VAT receipts provides an additional incentive for government to increase the pay of all public service workers because Scotland will retain an increased proportion of a decent pay settlement,” he said. “Fair pay will also combat increasing problems with recruitment and retention in some areas of public service.”

The Public and Commercial Services Union (PCS) also welcomed the news, but said it would continue to press for further, specific campaign goals on behalf of its membership.

“PCS will campaign for what is fair and right: a pay rise of at least five per cent, reparations for the decade of lost wages, and proper funding for public services.” PCS National Officer Lynn Henderson

PCS National Officer Lynn Henderson said: “We’re glad the Scottish Government agrees with our union’s long standing message on pay. However, our union will remain cautious in the face of yesterday’s announcement because we know that kind words alone are not enough.

“Even now many workers will not see any change to their pay until the end of 2018 at the earliest and they have no guarantees about next year’s pay award. PCS will campaign for what is fair and right: a pay rise of at least five percent, reparations for the decade of lost wages, and proper funding for public services.

“Our union represents the people who keep Scotland running. We manage forests and fisheries, look after our nation’s cultural heritage in art, history and libraries, and administer the policies set by the Scottish Government. We make our courts, our land, and our parliament work for the people of Scotland, and we are proud of this.

“Having won the point of principle, the real business begins today. Our message to government and employers is clear: our work matters, and we deserve fair pay now, not next year.”

Strategies for paying for any resultant increase from the end of the pay cap will be negotiated ahead of this year’s budget, the second overseen by finance secretary Derek Mackay. As a minority government, the SNP will require support on this among other budgetary measures, but may find support in Labour. Labour MSPs proposed scrapping the pay cap for NHS staff in May, but were defeated. However, Mackay announced a reconsideration of the issue weeks later.