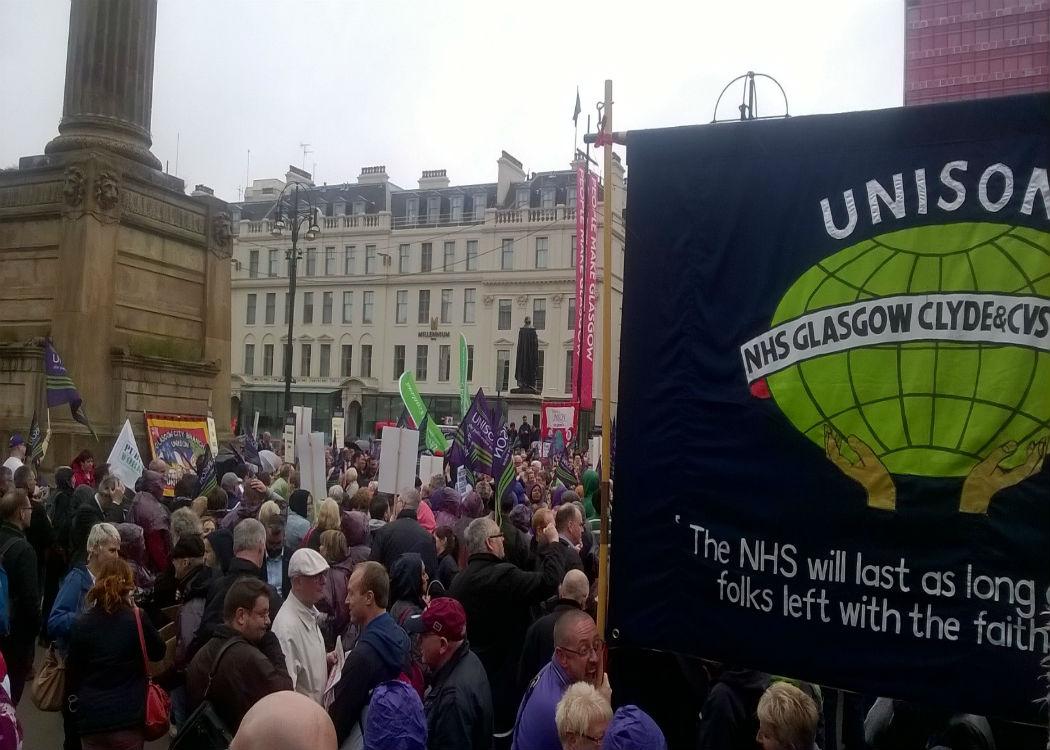 One thousand workers in the Unison trade union marched in George Square yesterday, venting their anger over the council’s treatment of union members in two separate disputes in the city.

The rally in the square came during Unison’s UK-wide annual conference in Glasgow, with workers leaving the conference to show support for the employees in Scotland’s biggest city that are at loggerheads with the Labour-run local council.

Homeless case workers in Unison have been on all-out strike for over 12 weeks over a grading dispute with the council. Meanwhile, a member of Unison, Robert O’Donnell, was fired from the SECC exhibition centre in Glasgow, which is 91 per cent owned by the council, in what the union claims is a case of victimisation for trying to organise the union in the workplace.

In both cases, the union has argued that the council is complicit in anti-union practices despite its stated commitment to the right of unions to organise, and collective bargaining agreements in council workplaces.

Brian Smith, chair of Glasgow Unison, said at the rally that the strike was “absolutely solid” despite the fact they had been out since the 31 March. He said the strikers had brought the council back to the table after it had initially been unwilling to listen to the workers concerns, but that the latest offer, which involved accepting the re-grading claim for two-thirds of the workers, “wasn’t good enough”.

The Glasgow Unison branch has been so angered by the behaviour of the council in the dispute towards its members that it has sought backing from the union nationally to deny the council funding as part of the union’s political levy that contributes money to the Labour party.

Jennifer Lawson, one of the homeless case workers, said: “There’s no way we are going back until every one of the case workers goes back on the same grade.”

The workers are seeking to be graded the same as other case workers in social work for jobs which, they argue, require a practically identical level of specialism, training and skill. Homeless case workers are graded differently because they were previously part of the housing department before being moved to social work.

Lawson said the action of the council in trying to defeat the strike was “ridiculous”, saying that workers not trained to deal with homeless people were doing case work, which puts homeless people and workers “at risk”.

Stuart Graham, shop steward on the southside of Glasgow, said that the council’s offer was an attempt to divide the workers and was therefore unacceptable.

He called for a national day of action in support of the strike.

In O’Donnell’s case at the SECC Exhibition Centre, a popular multi-purpose venue in Glasgow next to the Clyde, he was dismissed for an alleged unwitnessed incident regarding his supervisor. The union has been arguing for his re-instatement, saying that the sacking was about union-breaking in the workplace.

O’Donnell was a Unison health and safety representative at the workplace, but the union is not recognised by the employer despite 10 per cent of workers being members of Unison, the threshold legally required to expect collective bargaining rights in the workplace.

Smith said at the rally that it was “absolutely clear that O’Donnell was victimised for trying to assist the union, build the union in the workplace with an employer that is hostile to the trade union movement”.

He said that the SECC was 91 per cent owned by Glasgow City Council, and that it should use its shareholding in the business to demand O’Donnell’s re-instatement.

Smith added the council should “hang their heads in shame” for their complicity in union-busting.

O’Donnell spoke at the rally, saying that he had been fighting for collective bargaining rights at the workplace for two years, but the management refused to allow Unison literature on the staff notice board and cut off any dialogue with the union when contacted about staff concerns, despite the employers public claim that it is neither for or against trade unions.

He said the Glasgow City Council leadership and the SNP councillor on the board of the SECC should be shamed into action, singling out council leader Gordon Matheson, who just this week became a candidate for the deputy leadership of the Scottish Labour party, to “see sense” and get him re-instated.

Dave Prentis, Unison general secretary, said that Unison will boycott the SECC until O’Donnell is re-instated and trade unions are recognised, and is calling on the STUC, the TUC and the rest of the trade union movement to do the same.

He said the treatment of Unison workers by the council in both disputes was “absolutely disgusting”, and promised to throw the weight of the unions resources behind the homeless case workers to ensure they win the strike.