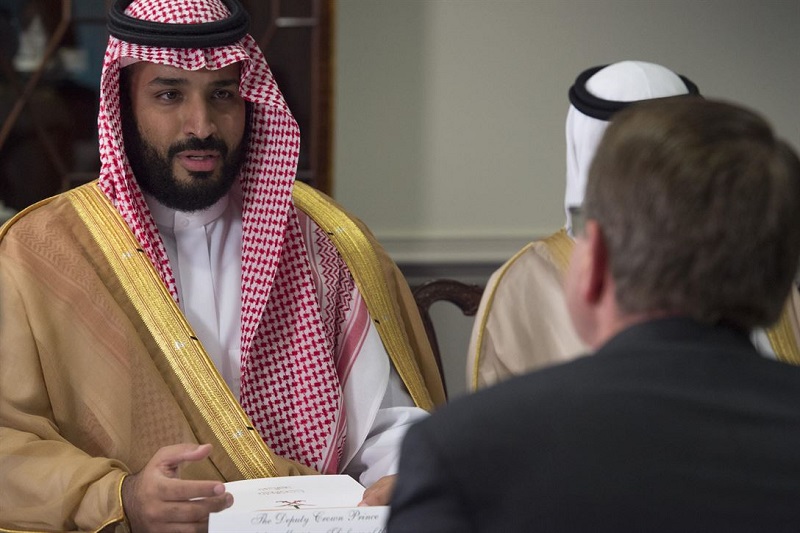 SAUDI CROWN PRINCE Mohammed bin Salman must be questioned by Theresa May on the regimes human rights failures, an SNP MP has said at Prime Minister’s Questions after human rights organisations called for the visit to be cancelled.

Speaking after the screening he hosted at Westminster of ‘Saudia Arabia Uncovered’, a documentary about the case of the imprisoned writer Raif Badawi, Stewart McDonald said the prime minister must use the visit to raise the Saudi regime’s “appalling human rights failures.”

Human rights and peace campaigners have been critical of the visit, with the Stop the War Coalition protesting the arrival of the Crown Prince and the UK sale of arms to the regime in light of human rights abuses in Yemen.

Speaking after he questioned the prime minister, Stewart McDonald MP said: “The Prime Minister has an opportunity today to raise the Saudi regime’s appalling human rights failures. We know that the situation in Yemen is a catastrophe – with up to 8 million people on the verge of starvation and this compounds all the human rights shortcomings inside Saudi Arabia itself.

“The Saudis must do more and anyone concerned about human rights and freedom of speech will expect the UK government to ensure that that message gets through to Crown Prince Salman loud and clear.”

“Anyone concerned about human rights and freedom of speech will expect the UK government to ensure that that message gets through to Crown Prince Salman loud and clear.” Stewart McDonald MP

James Jones, the producer and director of ‘Saudi Arabia Uncovered’, said it felt like the UK Government was “getting away with moral double standards”: “We are incredibly grateful to Stewart McDonald for hosting the screening of the film. It is quite incredible today to see Crown Prince Mohammad Bin Salman’s face plastered across the streets of London and on taxis, and it does feel like the UK government is getting away with massive moral double standards.

“It was important to show the film in Westminster and raise the case of Raif Badawi and it is a very valuable moment to call the UK Government out and hold them to account about their relationship with Saudi Arabia.”

Picture courtesy of US Department of Defence