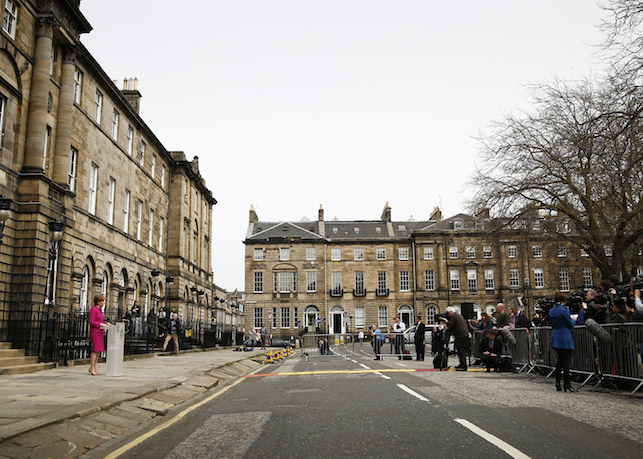 IN DESCRIBING PLANS for her first 100 days of new government, Nicola Sturgeon said the new SNP minority government would be open to “on occasion, compromising”.

This coincided with manoeuvres from the Scottish Green MSPs group, and Labour and Tory politicians to make deals across the chamber.

Below CommonSpace presents some of those early issues for the parliament.

A majority of MSPs were elected on a manifesto pledge to abolish elements of the controversial OBFA legislation, which criminalises football fans on the pretex of clamping down on sectarian behaviour.

SNP leader Nicola Sturgeon said she was open to a review of the legislation following criticism during the election campaign.

Labour MSP James Kelly has pledged to introduce a Private Members Bill to abolish the legislation. The Tories and LibDems are opposed on civil liberties grounds.

A split vote in parliament may hand the balance of power to the Greens. Co-convener Patrick Harvie MSP said yesterday [Sunday 15 May] that he would support a committee-led review of the bill, removing the parts that have caused conflict, while maintaining other parts of the act.

Harvie met with Sturgeon in the week following the election for a brief post-election exchange. The main issue of contention was plans to half APD taxation in the course of the parliament.

The APD tax cut, originally a plan to abolish the tax altogether, has faced questions over its impact on the national economy and climate change targets.

Harvie has proposed a ‘frequent flier’ tax alternative – meaning that “most of the [tax] burden would fall on people who take the highest number of unnecessary, short-haul flights.”

Sturgeon will face calls to compromise on the proposal, as it also faces opposition from Labour, the Liberal Democrats, and the Tories.

Taxation in the budget

The most high profile vote in the Scottish Parliament calendar is the budget arrangement.

From 2017/18, this will include control over income tax rates and bands. The council tax is also set to go through a process of reform.

However, all five parties have divergent views on income and council tax policy. No single party hold a majority, so discussions are likely over what the best way forward is for Scotland’s developing tax powers.

From 2007-2011 the SNP minority government made various concessions on budget spending through inter-party negotiations.

Nicola Sturgeon has made closing the ‘attainment gap’ (difference between the outcomes for rich and poor students) her number one priority as first minister.

Opposition leader Kezia Dugdale has already signalled her willingness to work with the government on this issue.

Education reform, a challenging area within which to advance policy, has already faced opposition from teaching unions – especially over plans to roll out extra testing in schools.

As ‘attainment fund’, to focus more resources on certain schools is less contentious. However, cross-party work in this area will be important – not just for votes, but to implement effective policy to reduce inequality.