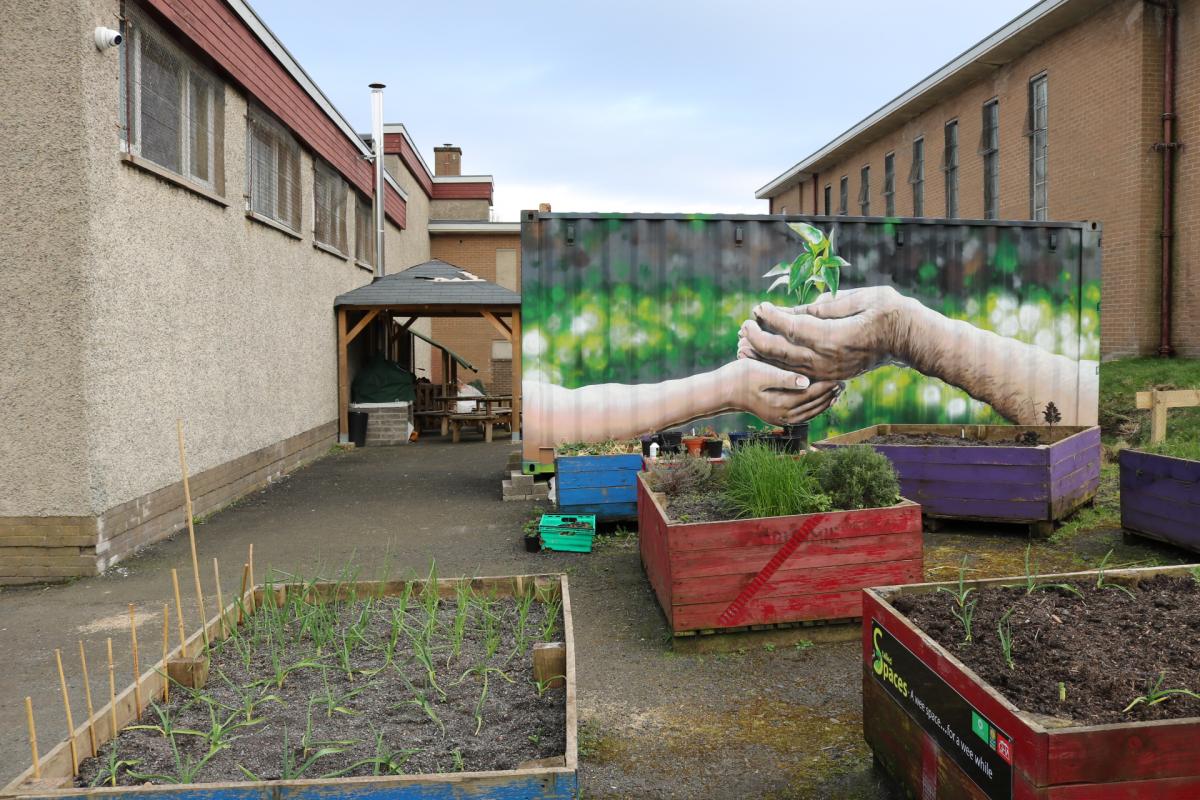 In the north of Glasgow, a community growing project has emerged where previously there was only a ‘food desert’, providing a dignified way to tackle poverty – but can such projects also be free labour for developers to exploit regeneration for commercial value?

“BEFORE woodlands, I was in a sorry state of affairs – unemployed, depressed, not confident, and very shy and insecure. I was being hassled by the Jobcentre and the ‘system’ and this was making my life difficult. Finding Woodlands Garden was good for me as it fitted in with my interests of nature, trees, plants and growing. It was also a starting point to get out of the difficult rut that I was in, and the social isolation which came with it.

“All in all, volunteering with Woodlands has changed my life hugely. It has made me feel part of something and I feel included rather than excluded. I feel proud to be part of a group of people who all help other people.”

Jonathan Dale volunteers at Woodlands Community Garden. Located in the north of Glasgow, it opened in 2010 and has become an important feature of the local community, where, each year, around 50 households grow their own fruit and vegetables. Volunteers like Jonathan help to maintain the garden through regular gardening sessions.

Allotment waiting lists are famously long with the average reported as seven to nine years in Edinburgh and up to seven years in some parts of Glasgow. Council supply fails to meet demands.

Instead, Edinburgh City Council states that people are encouraged by The Community Empowerment (Scotland) Act: “To come together and take on a piece of local Council ground (assuming that such ground exists). The City of Edinburgh Council will therefore support communities to fundraise to transform ground into an allotment site and thereafter manage the site. Management could be independent of the Council but there would be an expectation that any independent allotment site would abide by the Council’s allotment regulations.”

In recent years, community food growing initiatives or ‘urban agriculture’ has become increasingly popular. While numbers are hard to ascertain, the Social Farms and Gardens has around 250 members from growing projects and care farms in Scotland, a figure that they say has practically doubled in the past 18 months. A 2016 study found 68 community garden projects in Glasgow alone.

In Blackhill, in the north-east of Glasgow, the Blackhill Growers community garden forms part of the St Paul’s Youth Forum. Located in a ‘food desert’ in which there are no fresh fruit or vegetables available in the local shops, they grow fruit, vegetables, wheat and herbs, as well as keeping chickens. They sell the eggs and give away the vegetables to the local community. They also hold community meals and have a regular ‘veg barra’ in which they sell fresh fruit and veg from the nearby wholesalers at cost price. The project was started after young people had visited a project in Zambia and were inspired to keep their own chickens. 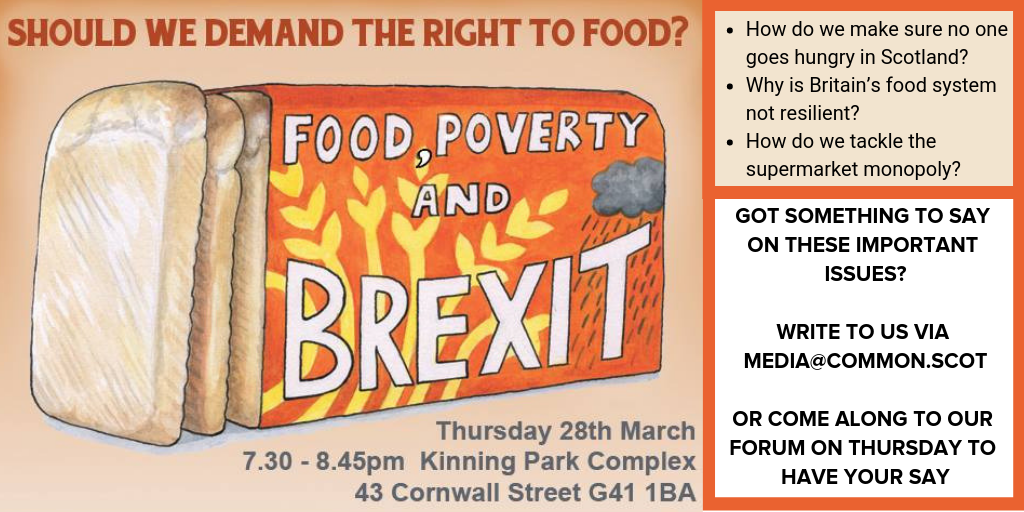 Speaking about the project, Mel Hall, community growing and cooking coordinator, says: “The theme from the beginning was about doing things with dignity. We aren’t a foodbank. It’s all about listening to people and people with lived experience of food poverty really shaping decision-making around the project.”

Joe Lowett, community garden workshop leader: “I think people are really proud, they are excited that you can get eggs that are local and that are theirs. With the exception of a few things like strawberries, we’re never going to produce enough to feed the people of Blackhill. It’s about education and we produce enough to pique people’s interest.”

With growing concerns around urban food insecurity and community disempowerment, urban community gardens are seen by some not only as a grassroots challenge to food scarcity, but as an opportunity to challenge hegemonic power structures and reclaim access to the local environment. They can also transform relationships between communities and food by allowing people to take control of food insecurity.

With growing pressures to relocalise the food chain highlighted by the ongoing insecurities around Brexit, community gardens are seen by some as an alternative source of food production. While the majority of them might be too small to make a big difference, there are international examples of urban agriculture on a much larger scale. 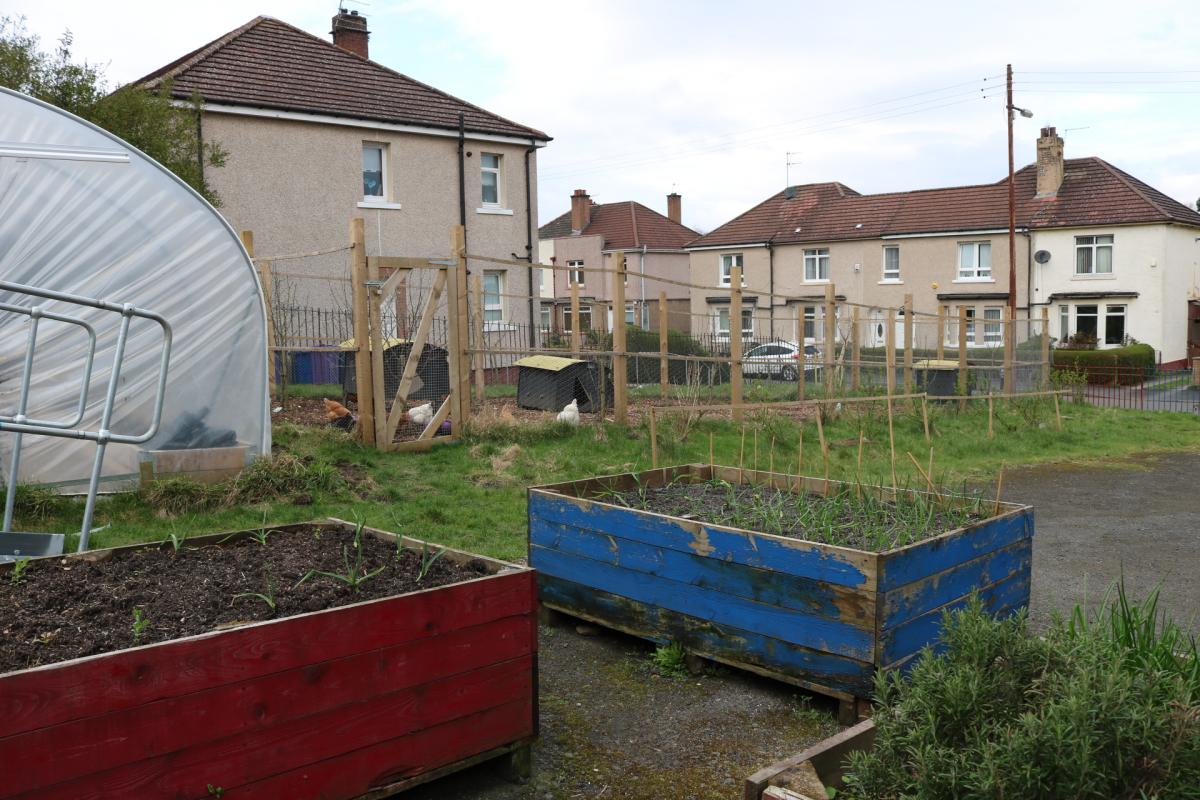 And while food production may be the main motivation, studies found that community gardens have many additional benefits for the communities and individuals involved, often serving to address social and cultural issues faced by communities. They can help to re-energise places and create a sense of diverse communities, providing a space for people to meet.

Mel Hall from St Paul’s Youth forum says that while community gardens “have a fairly limited capacity” to provide food for Glasgow, “they’re a good place for people to come together, feel more supported and I think people get a lot of therapeutic benefits from the growing.”

She added: “So if people know that there’s a place they can go, be a valued member of their community, and have a direct impact on their surroundings, when maybe it’s not possible for them to feel like they’ve got control over some aspects of their life.. I think that’s really important.”

In an era of austerity, with record levels of food poverty, community gardens are one of the initiatives left plugging the gap created by government cuts. Citizen participation, voluntary and third sector organisations make up for the lack of welfare provision, reducing state responsibility for the crisis which saw nearly half a million emergency food parcels delivered to Scots in food poverty between April 2017 and September 2018, according to a new report by Menu for Change.

Read more: Fresh calls for a right to food to be put into Scots law follow shocking food poverty figures

This can lead to a critique of community gardens as unconsciously aiding the neoliberal agenda by using free labour to regenerate an area, allowing developers to cash in by making property more saleable and paving the way for gentrification.

In their article examining the work of community gardens in Glasgow, Andrew Cumbers, Deirdre Shaw, John Crossan, and Robert McMaster, wrote that critics argue: “such activities can also be seen as working within the grain of punitive workfare programmes in generating more pliable working populations and reframing unpaid work. As part of more active labour market regimes, they help to recommodify labour rather than providing any sense of autonomy and empowerment.”

Speaking to CommonSpace, Professor Andrew Cumbers of the University of Glasgow Business school, who has carried out studies on the impact of community gardens, said: “There are loads of places in Glasgow where there are lots of derelict property and urban areas that have been left behind because industry closed. Without some kind of regeneration, they can be not very nice places to live and work. Unfortunately, in Glasgow, dominant policy been to redevelop in whatever way you can.

READ MORE: Councils are failing to give Grow Your Own allotment groups the support they need to thrive

“There is always a worry that you do up a place – often from community volunteering – that they quickly become attractive for property development. The big issue is who controls the land. If the city council has a strategy of property development without thinking of things in a more holistic way, a place can quickly become gentrified. You need a joined-up strategy which actually involves the community themselves and community ownership.”

And while paving the way for gentrification is a phenomenon that has been seen more in places like Berlin and New York, Scotland’s urban community gardens run similar risks. In one alarming example in 2015, a community garden in the Southside of Glasgow was bulldozed by developers. The project, developed by South Seeds, a community-led, sustainability-focused organisation, was left devastated after their work to transform a piece of disused land was destroyed without prior warning.

However, this story is not the norm. The majority of community gardens act as success stories that not only serve to bring a community together but increase knowledge about food and help to reduce social isolation for those involved. 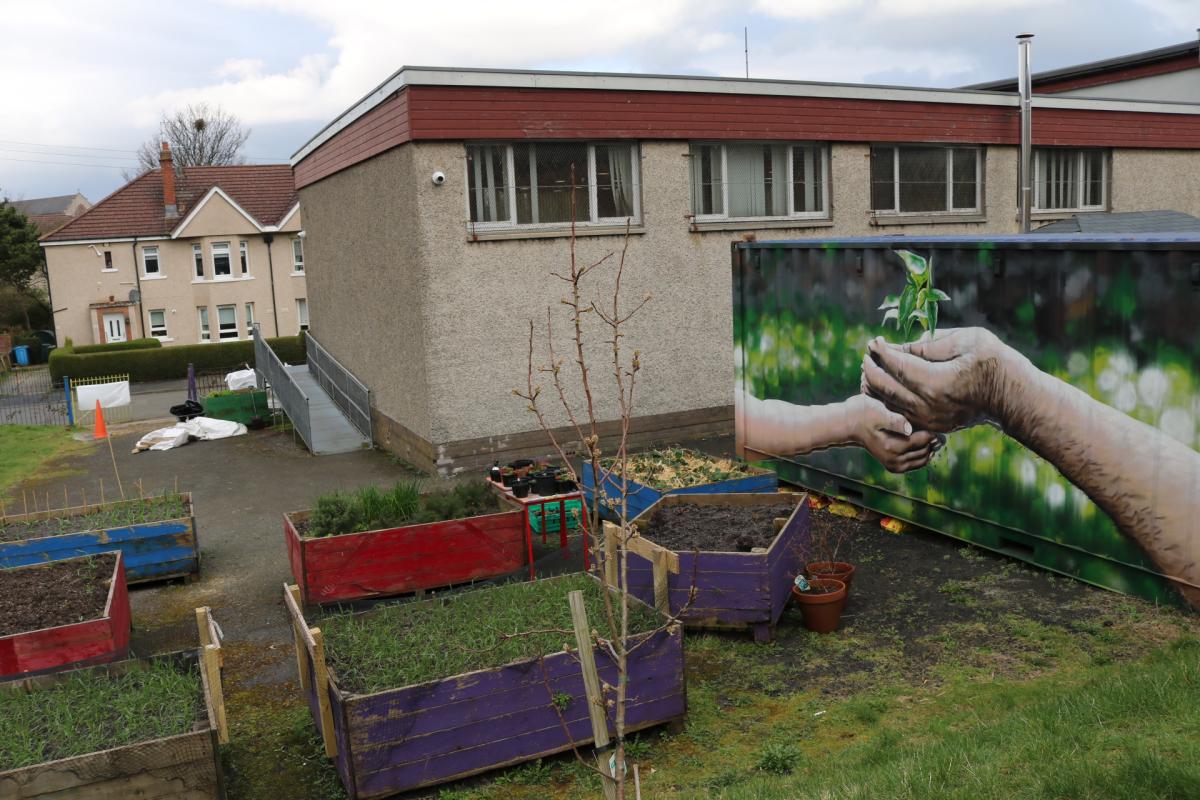 In their 2017 study on ‘The motivations and experiences of community garden participants in Edinburgh’, David McVey and Robert Nash found that:  “Anxieties over land use and land reform highlighted how community gardens symbolised empowerment but also showed resistance to the hegemonic structure of local council and government. In effect, the research suggests that community gardens grow much more than just food, they grow community.”

The need for a planning system which supports the long-term building of community around the energy and self-activity of those already living there, such as groups like St Paul’s Youth Forum, rather than allowing projects to be exploited for commercial value, is plain to see.

Offering advice on setting up your own community garden, Mel Hall of St Paul’s Youth Forum, tells us: “There’s a phrase ‘bloom where you’re planted’. Our garden grew out of people wanting there to be something like this happening here and that’s what we try and encourage. You don’t have to go down the route of looking for funding and building stuff up. There are loads of projects that work from people wanting to get together and that being the primary motivation.”

The Scottish Government’s Community Growing Fund grant scheme is currently open for applications, offering grants of up to £3,000 for practical works which support community growing activities.