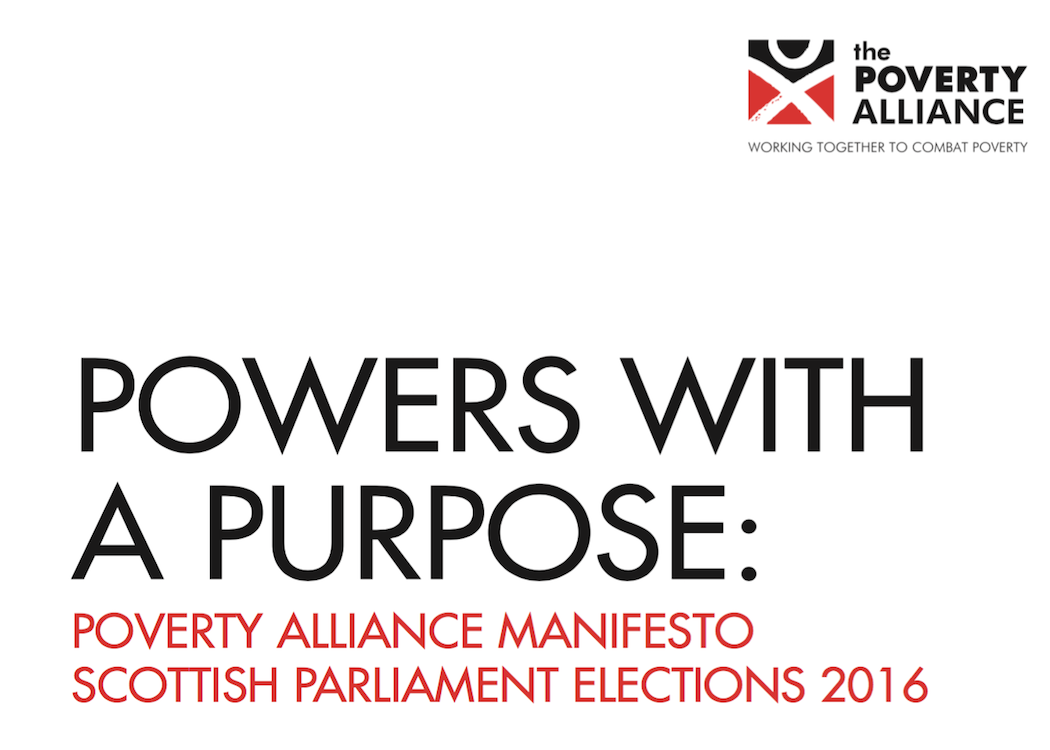 THE LEADING ALLIANCE of anti-poverty campaigners and charities have urged the major parties to pursue a more radical agenda using Holyrood’s new powers.

Build a Scottish social security system, roll out the Living Wage, and tackle stigma of poverty: this is the message issued by anti-poverty campaigners keen to see Holyrood’s new powers used effectively.

The manifesto, written by the Poverty Alliance in conjunction with its more than 200 members, urges political parties to promise more radical action on poverty.

Nearly one million Scots are now living in poverty, after housing costs are considered. One in five children are in poverty, and half of these live in a household where at least one adult is employed. The Poverty Alliance say this means work is no longer a guaranteed route out of poverty, and is urging top-ups to working benefits to combat Westminster cuts.

“It is wrong for us to accept a country where it is better for your life chances to be rich and thick, rather than poor and clever.” Ruth Davidson

Director of the alliance Peter Kelly said: “We’ve had 17 years of the Scottish Parliament, and poverty remains deeply ingrained. Today we are presenting 17 demands that we believe will lay basis for a fairer Scotland.

“It was clear following the independence referendum that there was a widespread desire for more powers to the Scottish Parliament. While the package being devolved may not be as exhaustive as many would have liked, they are still significant and it is vital that new powers are used.”

“It is nothing less than unacceptable that anyone should live in poverty in a country as prosperous as Scotland.” Nicola Sturgeon

The manifesto states that existing government appraoches, such as the Child Poverty Strategy, have “not led to the change that should have been expected”, and the group wants to see a new anti-poverty strategy implemented by means of a Scottish Poverty Reduction Bill.

It also states: “Scotland needs to build a social security system which is a genuine safety net for those that need it, but is also a springboard out of poverty.”

The manifesto coincided with the publication of the Scottish Anti Poverty Review, which the five leaders of Scotland’s main political parties contributed to.

Nicola Sturgeon, leader of the SNP, wrote: “My vision is of a prosperous, productive, high-wage country where everyone gets the chance to fulfil their potential – regardless of age, gender, ethnicity or economic background. I want a fair and equal society where absolutely no-one is left behind.”

“It is nothing less than unacceptable that anyone should live in poverty in a country as prosperous as Scotland.”

Leader of the Scottish Conservative Party, Ruth Davidson, wrote: “Tackling poverty is not a left or a right wing issue. It is one that all of us in politics must tackle.

“Let’s be entirely frank about this, it is wrong for us to accept a country where it is better for your life chances to be rich and thick, rather than poor and clever.”

Liberal Democrat leader Willie Rennie wrote that evidence shows more equal societies reap economic benefits. He said: “A society is stronger if it is fairer. This should be a country in which everyone can access good public services and have the chance to get up and get on.”

And Scottish Labour leader Kezia Dugdale said: “Scotland is one of the world’s richest countries and there must be something fundamentally wrong with the organisation of such a wealthy society that it tolerates a significant proportion of its population living in poverty.”