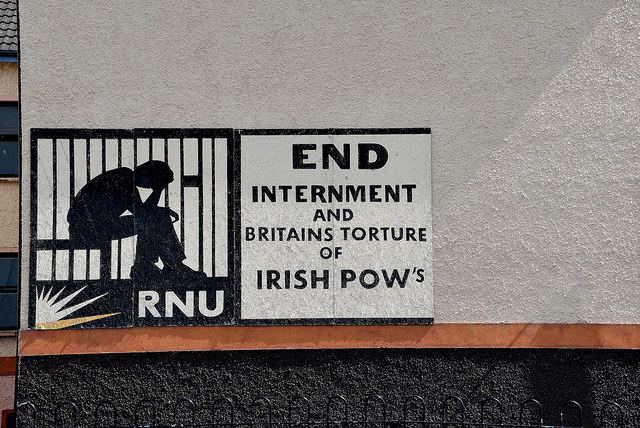 AMNESTY INTERNATIONAL has condemned a new ruling from the European Court of Human Rights (ECHR) concluding that British authorities did not engage in torture during the troubles in Northern Ireland.

The Irish Government had requested that the ECHR revise its 1978 judgement that 14 detainees of the British military, known as the ‘Hooded Men’, were not subjected to torture as it is legally defined.

On the morning of Tuesday, 20 March, the ECHR decided that “legal certainty must prevail and the final judgment must stand”.

The original Ireland v UK case, taken against the UK Government by the Irish Government, concerned the use of the so-called ‘five techniques’, which are generally defined as ‘wall-standing’ (in which those subjected are forced into a prolonged stress-position), hooding, subjection to noise, deprivation of sleep, and deprivation of food and drink.

Between 9 and 10 August 1971, of 340 prisoners rounded up by the British army and the Royal Ulster Constabulary, 12 were chosen for ‘deep interrogation’ and subjected to the five techniques. Later that year, two more men were exposed to the same treatment. All of the 14 detainees were Catholic, and none were ever convicted of any wrongdoing.

“When Amnesty visited the detainees in 1971, we found clear evidence of torture. Our findings have not changed in the years that have passed.” Amnesty International Northern Ireland campaign manager Grainne Teggart

The men were detained indefinitely without trial at a secret location, and in addition to the five techniques, were also beaten, subjected to death threats, and dangled out of a helicopter after being told they were high in the air, although they were actually close to the ground.

The ‘Hooded Men’ appeared to win a victory in 1976 when the European Commission on Human Rights ruled that the techniques employed were torture, but in 1978, this ruling was overturned on appeal when the ECHR found that that the UK had violated the 14 detainees’ rights to be free from inhuman and degrading treatment, but that the treatment the men suffered did not amount to torture.

The beatings and death threats received by the ‘Hooded Men’ were not considered in the ECHR’s original judgement, which was later used as justification for the infamous ‘torture memos’ written by the administration of US President George W Bush, which detailed what interrogation techniques could be used on detainees. Following the memos’ specifications, the CIA would use the ‘five techniques’ on victims in Iraq, Afghanistan and elsewhere.

The Irish Government made its request for a revision to the 1978 judgement in 2014, following the discovery of new information broadcast in the RTÉ documentary The Torture Files.

As the documentary’s investigation revealed, contrary to what the UK Government told the Court, it did have evidence of the physical and psychological consequences of the ‘five techniques’, and that the techniques had been sanctioned at the highest levels of the UK Government.

“In recent decades, especially in the counter-terrorism context, we have seen states undermine and chip away at the unconditional prohibition on torture.” Amnesty Ireland executive director Colm O’Gorman

Responding to the ECHR ruling, leading human rights advocacy group Amnesty International expressed its disappointment in the decision, arguing that it had been reached “on a technical legal point”, but emphasised that it is not a finding that the ‘five techniques’ fall short of torture by today’s standards. They further highlight that the ECHR refers to later case law, which shows how the ECHR definition of torture has expanded in the years since its 1978 ruling.

Grainne Teggart, Amnesty’s Northern Ireland campaigns manager, said: “This is a very disappointing outcome, for the men and their families. We believe the Court has missed a vital opportunity to put right a historic wrong. Instead, it relied largely on procedural arguments to avoid substantively revisiting its 1978 ruling.

“Forty years ago, the UK succeeded in persuading the Court to absolve it of the ‘special stigma’ of a finding of torture. It did this by deliberately withholding from the Court evidence it had about the severe physical and psychological suffering that these ‘techniques’ inflicted. It also claimed this was the unsanctioned behaviour of local military and police.

“When Amnesty visited the detainees in 1971, we found clear evidence of torture. Our findings have not changed in the years that have passed.”

Teggart continued: “What has been revealed in the files withheld by the UK Government cannot be denied. These men were tortured, and with approval at the highest levels of Government. The record of what these men endured in those interrogation rooms 47 years ago, and the devastating impact on them afterwards, still stands.

“The ‘hooded men’ have been denied justice for too long. The UK Government must now urgently conduct an independent and effective investigation into what happened, and prosecute any state agents involved in sanctioning or carrying out these violations at the time.

“This case underscores the need for a comprehensive means of dealing with historic human rights violations and abuses in Northern Ireland.”

Colm O’Gorman, executive director of Amnesty Ireland, added: “This ruling is disappointing, but needs to be seen for what it is. It is not saying the ‘five techniques’ are not torture. We are quite confident what was done to these men would be deemed as torture by the Court in today’s terms if this case were heard afresh.

“This was a revision request judgment though, and not a new hearing. The Court has made a narrow technical legal point – that the long-term effects of the techniques would not have impacted on the 1978 judgment. It is very important that this be understood.

“In recent decades, especially in the counter-terrorism context, we have seen states undermine and chip away at the unconditional prohibition on torture. The European Court has taken a positive stand against torture in that period. As the Court noted today, it very quickly expanded its interpretation of torture after the 1978 Ireland v UK case.

“This regrettable judgement must not be misrepresented or misinterpreted as encouraging views of torture as limited to extreme physical measures, ignoring the severe and long-lasting suffering that more ‘subtle’ torture measures can cause. States using the sort of interrogation methods like these ‘techniques’ must not be allowed to take comfort from today’s ruling.

“We commend the Irish Government for trying to help these men, and the families of the men who have since died, to seek to have their rights to truth and justice vindicated. In 1971, Ireland took a brave, unprecedented step when bringing the case against the UK.

“In taking this case, and then in seeking this revision, Ireland maintained this was torture. So did the men, their lawyers, and Amnesty International. This is what we have asserted ever since, and assert again today. This judgement is a disappointment. However, we will continue to stand strong in defence of the universal and unconditional prohibition of torture and other ill-treatment.”