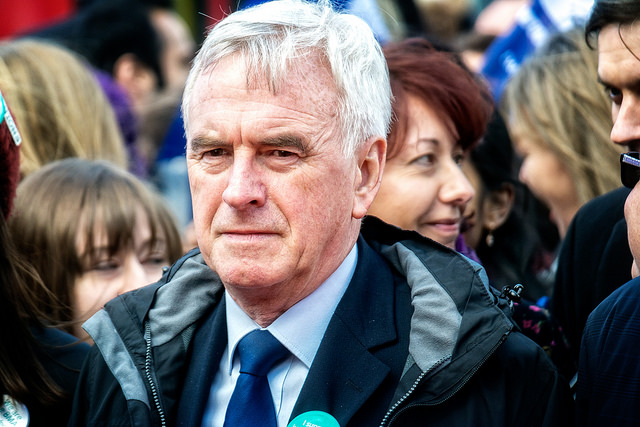 Division in Labour as MPs whipped to vote against backbench amendment

THE LABOUR PARTY’S disunity over its Brexit policy came to the fore last night as party whips ordered MPs to vote against or abstain on a backbench amendment to the Taxation (Cross Border Trade) Bill to keep the UK in the customs union, although remaining in the customs union has been the stated Labour party policy.

Had the amendment passed, taxes would not have been charged on imports to the UK after leaving the EU, which would effectively keep the UK in the customs union.

In a move condemned by the SNP and a number of Labour backbench MPs, shadow chancellor John McDonnell and 18 other Labour MPs voted along with 283 Conservatives, eight DUP MPs and two independent MPs to reject the amendment put forward by Labour MP for Edinburgh South, Ian Murray.

Ian Murray said after the vote: “It is disappointing that this amendment was defeated but the fight for customs union membership is far from over.

“The government’s reckless, ideological decision to pull us out of the customs union will damage trade with the EU, our biggest economic partner, and risk chaos at our ports with lorries backing up motorways as they face reams of new red tape.

“And it will make a hard border between Northern Ireland and the Republic of Ireland inevitable.

“Customs union membership is simply the best economic option for our country. Leaving it for fantasy new trade deals which cannot replicate the trade we do with Europe is no solution.”

Backbench Labour MP Wes Streeting tweeted on Tuesday that he would have supported the amendment and was “not happy” because MPs had been “told that we could go home because no important votes”.

Labour’s shadow international trade secretary Barry Gardiner said the amendment “would not keep us in the customs union” and shadow treasury minister Anneliese Dodds said it could “worsen our situation”.

Responding to Dodds’ concerns prior to the vote, Murray asked: “[If she] agrees with the principle of staying in the customs union, where are the frontbench amendments to do that?”

The SNP, which backed the amendment, has written directly to Jeremy Corbyn to clarify that the instruction to MPs not to support the amendment came from him as party leader and that his position is for the UK to leave the customs union.

SNP International Affairs spokesperson Stephen Gethins MP said that Labour had failed to stand against “hardcore Tory Brexiteers”, and described the decision as “utterly unbelievable and quite shocking”.

Gethins said: “Labour and the Tories worked together to bring the cliff edge of a Hard Brexit all the closer.

“Brexit has already cost workers in the UK the equivalent of a week’s wages due to rising inflation – according to a new [London School of Economics] report – with Scotland amongst the hardest hit.

“The worst impacts of Brexit could well hit the most vulnerable in society. In this parliament of minorities it is all the more important that progressive politicians of all parties work together to avoid the worst excesses of Brexit.”

Tory MP Anna Soubry, who backs continued membership of the customs union, said: “It can’t be right that the overwhelming majority of honourable and right honourable members in this place agree that we should be in the customs union and the single market, and the only reason that that isn’t even on the table anymore, and it’s an uncomfortable truth, is because I fear my party is in hock to 30 to 35 hard, ideologically driven Brexiteers.”