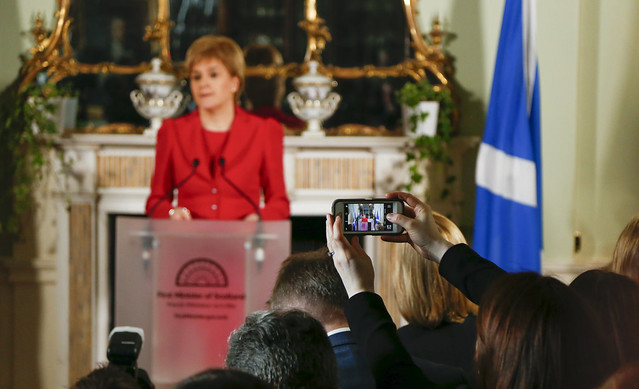 Glasgow-based Common Weal campaigner Val Waldron looks at the twists and turns of Nicola Sturgeon’s leadership of the independence movement since the Leave vote in 2016, finding that while there is no easy answers, shutting down debate will not take us forward

IS OUR  first minister a people pleaser, a shrewd political strategist or both?

She looks equally at home supporting local events in her own constituency as she does at a march and rally for a second EU referendum in London or a meeting in Brussels with Jean-Claude Junker. Or an independence march and rally. Well, maybe not. She is the first minister of all of Scotland after all, regardless of constitutional preferences.

Then there’s the Growth Commission. That should please everyone. Ah, enough sarcasm. I like her, I do. The frenzied, through the roof popularity of the yellow foam finger days may have given way to a bit of healthy scepticism, but she presents a generally positive image of leadership to the outside world. The trouble is it all comes with a bit of squeaky bum shiftiness. The simple question of where we are with ‘the independence obsession’ that unionist critics claims she has.

In those first days of post-Brexit shock Nicola Sturgeon was the grown up in the room, diplomatic and reassuring. We were on a roll, and the first minister’s stateswoman-like presence confirmed her as a worthy leader, while Remainers in the rest of the UK floundered. It was all in hand. Some unlikely characters such a Margaret Curran and Kezia Dugdale briefly voiced the unthinkable about independence, and a poll was taken immediately after the EU referendum that showed Yes at 59 per cent. For many this was not a knee jerk response, and several previous No voters fell into the Yes camp.

We lost some too. There are strong views around that independence should not be so intrinsically linked with Brexit. However, Scotland’s 62 per cent remain vote, and the prospect of being taken out of the EU against our will provided the solid mandate.

Fast forward to strong and stable Theresa May’s “Now is Not the Time” line, then the snap General Election of June 2017 and the loss of 21 SNP seats, 12 of them to the Tories. The Ruth Davidson Party had made its impression as the party of the Union, and several more seats teetered on the brink. Admittedly many voters had returned to the labour fold essentially to elect Corbyn as PM, rather than wound the SNP or the Yes movement, but the unintended consequence of this was to embolden braying Blairites about the strength of the union. The SNP campaign did not match the constitutional fervour of the Unionists, and I know that I was not alone in experiencing nagging frustration each time Davidson’s erroneous taunting about Sturgeon’s independence obsession was never met with cries of: “Absolutely!”

In August 2017, SNP MP Tommy Sheppard gave the annual Thomas Muir lecture as part of the Edinburgh Fringe. During this, he advocated that a fresh and unconditional mandate for independence should be fought for in the 2021 Scottish Parliament elections. This was on the basis that the outcome of Brexit would be unclear until then, and, addressing fears that an independence majority could be lost by then, he said: “…if we can’t win a majority in 2021, out of a range of pro-independence parties, under a system of proportional representation, then we will not win a year before anyway.”

The debate reawakened (though some, such as Common Weal and several Yes groups, had never slept), and new ideas emerged for discussion. Some in Labour Yes supporters raised their head above the parapet, in spite of the stifling and undemocratic stance of their leadership. By 2018 things were looking more hopeful again, then along came the Growth Commission Report; “just for discussion” came the background white noise. Despite the very best efforts of the Common Weal and SNP grassroots campaigns, it crept insidiously into the mix.

All things considered though, who would have Nicola Sturgeon’s job at this time? (Apart from Ruth Davidson.) There remains a chasm between the hopes and expectations of the party faithful and many within the wider movement, compared to the rate of actual progress or certainty of a second independence referendum. Initiatives have been launched, such as Angus Robertson’s Progress Scotland public opinion polling project and the Yes.scot website. Legislation has been prepared for the presentation of another section 30 request, but followed on swiftly by voice after voice declaring that this will never be allowed on their watch. In addition to the Tories, newly elected Liberal Democrat leader Jo Swinson, Scottish Labour leader Richard Leonard and the ambivalent and possibly disinterested Jeremy Corbyn offer up the same undemocratic rubber ear.

Still, diplomatic as ever, and apparently with the interest of all of the UK at heart, Nicola Sturgeon campaigns tirelessly for a second EU referendum, and faces down some of the most toxic Tories to emerge from Westminster with controlled determination to state Scotland’s position. Immediately on the election of Boris Johnson as PM, she wrote: “Given your public comments about leaving the EU on October 31 with or without a deal, “come what may” and “do or die”, it is now – more than ever – essential that in Scotland we have an alternative option.”

In March 2019 SNP deputy leader Keith Brown said: “I don’t think the yes movement should be willing to anticipate a refusal of a section 30 order as a reason not to call a referendum”. However, in the face of opposition demands for clarification at Holyrood, the FM was insistent that she has no plans to call a second referendum without a section 30. I hear from faithful supporters that Sturgeon has a plan, and that she is wise not to reveal it right now. Maybe she does, and I’m as curious as the next person to know how a referendum can be held and won prior to 2021, as suggested, without the focus and commitment of, at the very least, an official campaign, if not a referendum date. Most of all, I want to know how the refusal of a section 30 request can be surmounted. This is the elephant in the room.

A series of polls showing a significant increase in numbers for independence may be one way to force the granting of a referendum. There are other routes to independence, as Cllr Chris McEleny and Angus MacNeil MP indicated in their motion to the SNP’s party conference committee. However, the refusal of the committee to allow a debate at the conference on the motion, which looks at the premise of an SNP majority in the 2021 elections as a starting point for independence negotiations, points to an all too familiar tendency for top down control of vital matters around independence. There is no certainty that the substance of the motion, resubmitted as an amendment, and supported by increasing numbers of party activists, will reach conference.

We know that EU membership is important to most of Scotland’s voters, but we have work to do in presenting a truly positive case for independence that does not rely on fear. I’m sure that Nicola Sturgeon wants that too, and has done all of her life. However, with a recent YouGov poll indicating that four out of 10 Labour Party members in Scotland support independence, it is vital that the tribalism and rivalries between the parties does not stand in the way of progress within the wider independence movement. The closing down of debate from the party leadership is counterproductive. It becomes more evident as time goes on, and we stumble into the darkness ahead, that it becomes more and difficult to strategise and predict. I don’t know what the best way forward is, but we can talk and listen. We can have public meetings, we can talk to constitutional and legal experts. We can support and energise the SNP grassroots in their efforts to influence policy and direction, and we can ensure that the Yes movement does not become synonymous with the SNP.