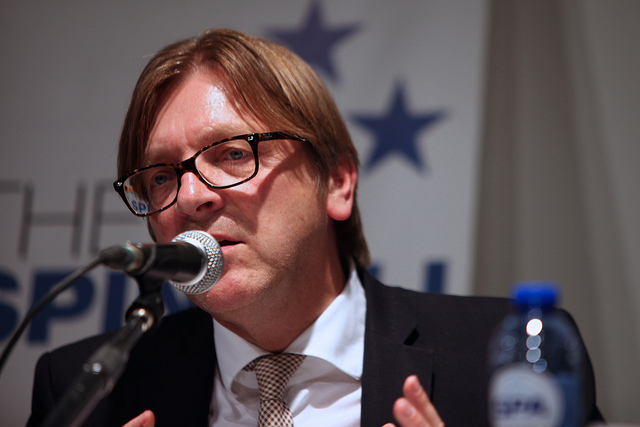 European parliamentarians gear up for firm showdown on Brexit negotiations

Made on the group's website, Verhofstadt's comments were in reaction to the news that UK Prime Minister Theresa May wants to negotiate the's UK access to the single market with what he calls “exceptional” benefits.

These would included an additional rebate and a seven to 10-year “emergency break” on migration from the European Union (EU).

Verhofstadt, who on social media doubled down on the statement, said: "The European Parliament will block any deal giving the UK a new, favourable status."

The member of the European Parliament (MEP), who became known for his oratorical duels with the Greek prime minister, Alexis Tsipras, went on to say: "A deal with these conditions would be unthinkable.

"It would allow the UK to expand its already very favourable position: keeping the best parts and ridding itself of the obligations that come with it.

"EU governments would be mad to agree to such a deal and I can tell you: the European Parliament will never agree to a deal that ‘de facto’ ends the free movement of people for a decade,while giving away an extra rebate in exchange for all the advantages of the internal market."

The MEP went on to suggest that there was danger in allowing the UK to negotiate such favourable terms after voting to leave the EU. As a result, he warned, other countries may be encouraged to gain concessions which would, in his view, threaten the integrity of the European project.

"What would stop other countries from asking the same exceptional status?" Guy Verhofstadt

The ALDE leader continued: "What would stop other countries from asking the same exceptional status? Do we really want eurosceptics elsewhere in Europe to invoke the British example of ‘having their cake and eating it’?

"Everyone can see that this position is irresponsible because it’s not sustainable in the long run.

"The only new relationship between Britain and the European Union can be one in which the UK has an associated status with less obligations but equally less rights."

Verhofstadt also pointed out a deeper problem with the current deal-making process: "By solving our problems this way – with more and more exceptions to the rules – we only create new precedents and thus, new problems.

"The way the Commission is tackling the Brexit negotiations is comparable to the way it has addressed the rule of law crisis in Turkey: closing it's eyes.

"The Commission must learn to adopt a clear stand point and – if necessary – be willing to make a clean cut, whether it be with Britain or with Turkey."

"The only new relationship between Britain and the European Union can be one in which the UK has an associated status with less obligations but equally less rights." Guy Verhofstadt

Verhofstadt’s statement is especially important in the light of previous comments and leaks from parts of the German administration. Wolfgang Schäuble, the German federal minister of finance, was reported by Handlesblatt to have prepared a paper called 'German strategy regarding Brexit'.

Eight pages long, and completed before the Brexit vote was confirmed, the paper detailed how the German government wants to deal with Britain as it leaves the EU. It, too, was written in order to caution other countries in the EU from thinking they can obtain better terms by leaving.

Theresa May completed her first state trips to France and Germany last week to talk to the heads of the respective governments. In a press conference with Angela Merkel, May made it clear there would be no triggering of Article 50 to begin the UK departure from the EU until the new year.

In response, both Angela Merkel and Francois Hollande, the French president, stated that the preferable option was for negotiations to start as quickly as is feasible.

The UK voted to leave the European Union by 52 per cent to 48 per cent in favour of remaining.