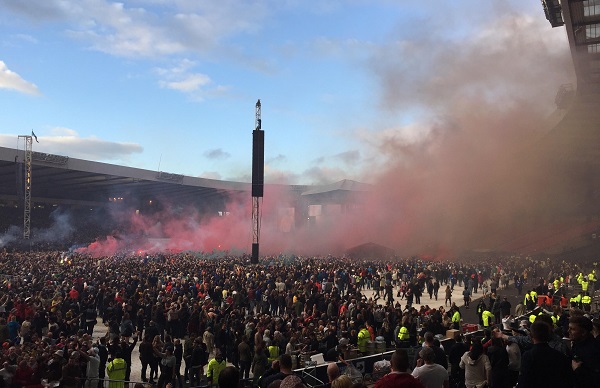 In the early 1990s, they rose: starved by Thatcher and made of stone, like the Northern powerhouses from which they came. Cities like mine. They weren’t just made of stone, but written in it.

On Saturday 24 June 2017, the walk to Hampden Park was a three-striped spectacle. Generations of music lovers marched baptised in cans, anointed in an incense of aftershave and weed.

For many, a Stone Roses concert is an evangelical experience. For me, the first poetry I loved was about Arctic sheets and fields of wheat, the first art splattered Jackson Pollock. And I am not alone. Everyone has their story to tell – their Heaton Parks, Glasgow Greens and Spike Islands. In the seating areas they bore their children with the well trodden details, some of which have already perfected Christ-like posing and maraca dancing. Others prefer to check out on Face Time to absent friends.

The Thatcher era has left open wounds in British working class communities. Her erosion of society is evident in the national psyche and the power struggles still at play today.

The Thatcher era has left open wounds in British working class communities. Her erosion of society is evident in the national psyche and the power struggles still at play today. But arguably, this influence in popular culture was far from decimating.

She gave fuel to the fires of many, who created some of the best music to ever come out of these islands and touched the hearts of generations. From Punk to Manchester, Acid House to Ska. It can’t be without note, that under the most rightwing administration in decades, this is no longer apparent in popular British culture.

White washed homogeny is the order of the day. Word of mouth has been replaced by social media likes and retweets, with British guitar music becoming an increasingly independently bankrolled Topshop pursuit.

A recent documentary detailing Oasis’s rise to popularity charts the Gallagher brothers collecting their dole, and buying vinyl and weed before embarking on epic road tours in hired white vans.

Some Stone Roses fans at the gig 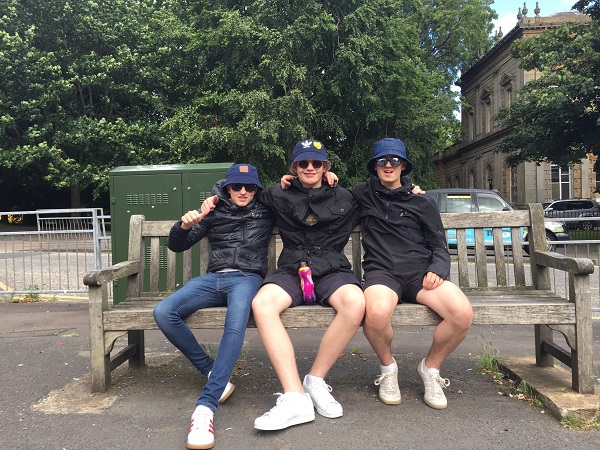 What would become of them, had they been subject to indiscriminate benefit sanctions, forced into Workfare training and irregular insecure zero-hours contracts?

Clearly, the current austerity mandate has a negative impact on the working class contribution to popular arts.

But back at Hampden Park, a young man sliced the crowd with his shoulders back and arms outstretched. His right hand raised a smart phone above a sea of heads – “I Wanna Be Adored” blared as red and green smoke flares plumed in every direction.

Later, I heard him tell his friend he had to go straight home. The van picks him up at 6am, he said, and he didn’t want to be in work half cut. As the lucky few lined up at merchandise stands, desperate to buy their £45 chunk of music history, the majority piled the buses to Easterhouse and Pollok.

And as the curtain drew on what is said to be the final show of this seminal band, it was the end of an era. An era where music was homegrown and unpretentious; raised in illegal raves and self promoted day long festivals, basking in the chemical glow of inner city power plants.

There was a tear in the eye of many as they exited the venue, astutely aware they will never see the likes of Ian, John, Mani and Reni on a stadium stage again.

There was a tear in the eye of many as they exited the venue, astutely aware they will never see the likes of Ian, John, Mani and Reni on a stadium stage again.

Before the gig, a Shawlands bench was manspread by three teenagers and their carry out; too young for the pub, but old enough to want to be part of the buzz. “You don’t get bands like this any more,” they told me. Their accents were thick Stirling, the pace racing with anticipation. “Bands like us.”

It’s not all about class, I hear you cry, can you be absolutely sure about that?

You can find out more about Victoria McNulty’s poetry here on her Facebook page.