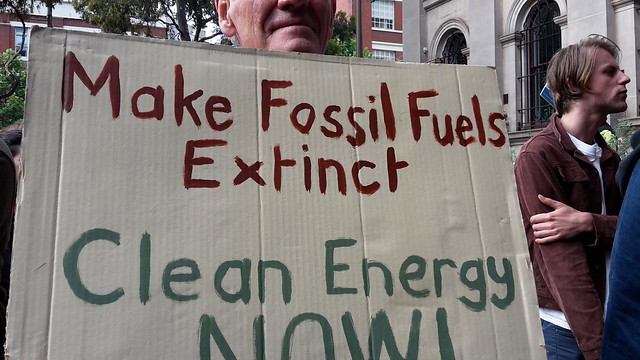 THE EDINBURGH International Science Festival will no longer accept funding from fossil fuel companies, following pressure from campaigners and controversy over its past associations with Exxon and Total.

In a new sponsorship policy published on 2 April, Edinburgh Science, the charity behind the festival, confirmed that it will avoid taking funds from “fossil fuel companies and their primary trade bodies” – indicating that the festival’s divestment will also extend to income from partnerships with the Scottish Oil Club, which faced a sit-in demonstration last month from the protest group Extinction Rebellion during its annual dinner at the National Museum of Scotland.

A statement from Edinburgh Science regarding the decision said: “We routinely review our sponsorship policy and have recently decided that we will no longer seek sponsorship from fossil fuel companies.

“With the issues of climate change ever present and urgent, we feel increasingly compromised by the conflict between accepting sponsorship from fossil fuel companies and programming events that scrutinise the main causes of climate change.

“The UN Intergovernmental Panel on Climate Change (IPCC) calls for a dramatic and immediate reduction in the amount of fossil fuels consumed if we are to keep global warming to no more than 1.5 deg. centigrade. This calls for a step change in the way the world uses fossil fuel and therefore the way the companies that extract them operate.

“Whilst we see change happening in the oil and gas sector and appreciate that the demands on them are complex, we are of the view that the sector is not moving fast enough to meet the IPCC targets and that there is a conflict between their behaviour and the underlying science.

“Climate change is without doubt an urgent threat of unprecedented magnitude and Edinburgh Science is committed to doing all that it can to bring it to the world’s attention through its festival and learning programmes.”

The decision represents a significant reversal, given that the festival’s 2019 programme, released in January, appeared to confirm that it would continue to accept funding from Exxon and Total.

The development follows extensive protests by climate activists – who have accused some of the EISF’s prior sponsors as being among the 20 companies most responsible for global climate change, and promised to run a series of demonstrations during the 2019 festival – and was welcomed by the Science Unstained campaign, which recently launched a petition and open letter on the issue, signed by a number of scientists including Professor Kevin Anderson, deputy director of the Tyndall Centre for Climate Change research.

In April 2018, activists disrupted the Edinburgh Science Festival exhibit EcoVille, which festival organisers had described as a “family-friendly low carbon village”, due to its sponsorship by the oil giant Shell, which the activists contend also has a history of covering up climate science, human rights violations and the company’s contribution to global carbon emissions.

Science Unstained spokesperson and University of Edinburgh PhD student Tara Wight commented: “Following a year of campaigning, we welcome the decision by Edinburgh Science to distance themselves from the fossil fuel industry.

“By being associated with science outreach events, fossil fuel companies aim to clean up their image and present themselves as responsible organisations that are in alignment with scientific consensus on climate change.

“Fossil fuel companies have known about the science of climate change for decades, yet instead of taking action they have continued to expand and intensify the extraction of fossil fuels, while funding misinformation in the media.

“Sponsoring educational and cultural organisations is a cheap and effective means of improving their public image while continuing to destroy the earth.

“The decision by Edinburgh Science to drop fossil fuel sponsorship is an important and necessary step for upholding their scientific integrity.”

Friends of the Earth Scotland spokesperson Ric Lander added: “Leading Scottish organisations are cutting their ties with oil, gas and coal companies because they can see that fossil fuel extractors are exacerbating the climate crisis. We urgently need big oil to get out of the way if we’re to secure a just transition to a zero carbon Scotland. As the first Scottish cultural organisation to explicitly reject fossil fuel funding, Edinburgh Science have made a crucial contribution to Scotland’s fight for climate justice.

“Anyone concerned about climate change should take heart from the Edinburgh Science Festival’s brave stand against fossil fuel pollution.”

Lander continued: “Campaigners attention will naturally be drawn to the Scottish Parliament role, including the Parliament pension funds’ investments in fossil fuels, and how the forthcoming Scottish National Investment Bank could be fossil free.”