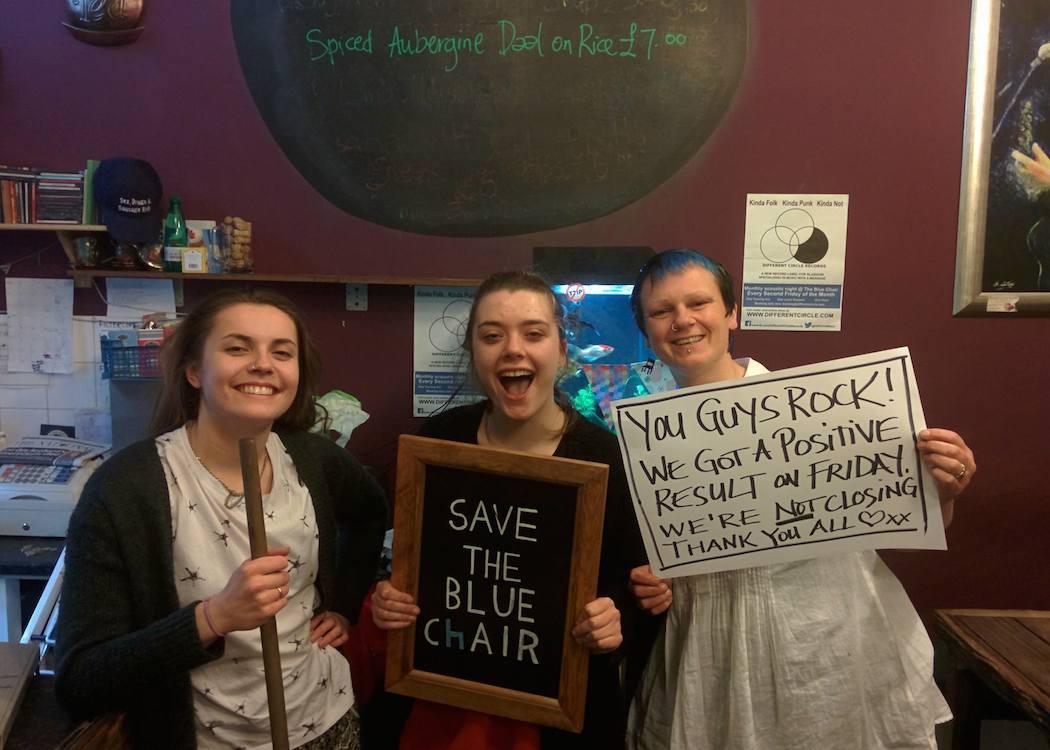 ATTEMPTS to save a popular community cafe from council eviction in Glasgow have been successful.

Three weeks of fundraising and campaigning to save the Blue Chair cafe on High Street have led to council owned landlord, City Properties, removing the threat of eviction and offering a viable debt repayment plan.

Activists and owner Lorelle McGurran are now celebrating the new lease of life for the community venue, which has become an open meeting spot for politics, performance and a community space for people recovering from addiction.

Speaking to CommonSpace about her meeting with City Properties McGurran explained: “I went in with my new business partner. I was surprised. They gave us a lot of kudos and credit for our level of support, which they had been totally aware of over the past weeks.

“There was a huge swing in attitude change in the way I was dealt with [by City Properties] from before this campaign.” Lorelle McGurran

“It had surprised them. They admitted they had underestimated the business. Previously there was no counter offers. They just rejected everything. This time they actually came back with a realistic deal that gave us financial breathing space. Our head is off the chopping block and I’m ecstatic.”

Over three weeks supporters raised over PS3,300, attracted new customers to the cafe, and gained support from local councillors and through the media.

“There was a huge swing in attitude change in the way I was dealt with [by City Properties] from before this campaign,” McGurran explained.

“I contacted them mid-campaign to arrange a meeting to sit down and discuss issues. The tone of communication was a complete flip side. They have changed their mind. They really did think that I was inexperienced and not from the industry.

The Blue Chair ran up around PS10,000 of debt running its first year and a half of operation, but is now running at a monthly profit. Due to the campaign, McGurran has already begun to reduce the debt and bring in investors to what had been a one-woman operation.

“I’m confident that we can [complete the repayment plan]. Then ‘we’ will grow. Our trade has picked up because of the buzz and the raising of awareness,” she said.

The victory to prevent the eviction of the cafe was welcomed by campaign organiser Aileen McKay: “We are absolutely delighted that the Blue Chair community cafe is able to stay open. It’s a welcoming and inclusive environment, and much-loved independent business.

“We’re looking forward to welcoming in customers new and old. A huge thank you must go to each and every person who contributed their time, money, and skills to our campaign – it’s been invaluable.”

City Properties confirmed to CommonSpace that the meeting with McGurran had been “very positive”, but did not wish to comment further on tenant financial issues.

“As in this instance, we are willing to work with tenants experiencing financial difficulties to find a suitable solution for all involved,” a spokesperson added.

Elsewhere in Scotland campaigners have called for resistance to the eviction of tenant farmer Andrew Stoddart , a case that was also profiled on CommonSpace .

Over 100 families are also set to be evicted from Lorne Street in Edinburgh in the new year, despite calls to turn the housing into a cooperative scheme.