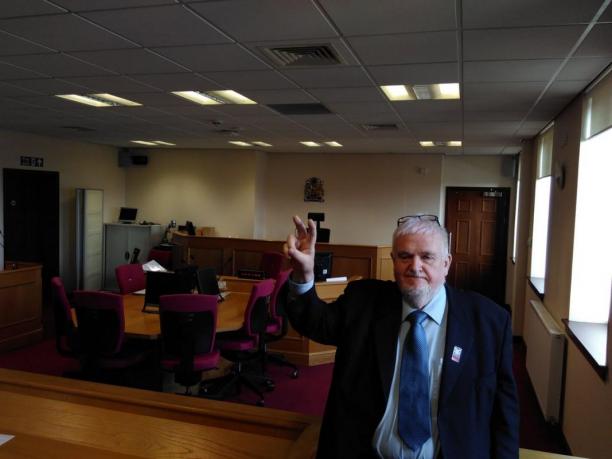 Brian Quail and Angie Zelter have been released pending trial

THE CONTROVERSIAL bail conditions against two Trident protestors have been dropped after a sustained campaign for justice for the activists.

Brian Quail 79 and Angie Zelter 66, had been held on remand following their arrest on 12 July for refusing to abide by bail conditions that meant they were banned from protest against the UK’s Trident nuclear weapon system at its bases at Faslane and Coulport in Scotland.

The pair were arrested for peacefully blocking access to Coulport, and will stand trial for breach of the peace in October.

Outrage accompanied the bail conditions, now dropped by the Procurator Fiscal, as the Trident weapons themselves had recently been handed a banning order by 122 nations at the UN, which voted to back an international nuclear weapons ban treaty on 7 July.

Zelter said: “Today the PF has seen sense and dropped the demand for conditions that restricted Brian and Angie’s fundamental right to protest. This is a small victory for peaceful protest on the long road to disarmament.”

The conditions were dropped and Quail and Zelter released at an intermediate viewing at Dumbarton JP Court today (Wednesday 26 July), in what is being hailed by campaigners as a small but significant victory for the international anti-nuclear weapons movement.

CommonSpace contacted Dumbarton JP Court for a statement, but they said the clark had not returned from the court session yet.

The international ban on nuclear weapons will come into effect in September. The UK and a small, isolated group of nuclear weapons states boycotted debates over the treaty.