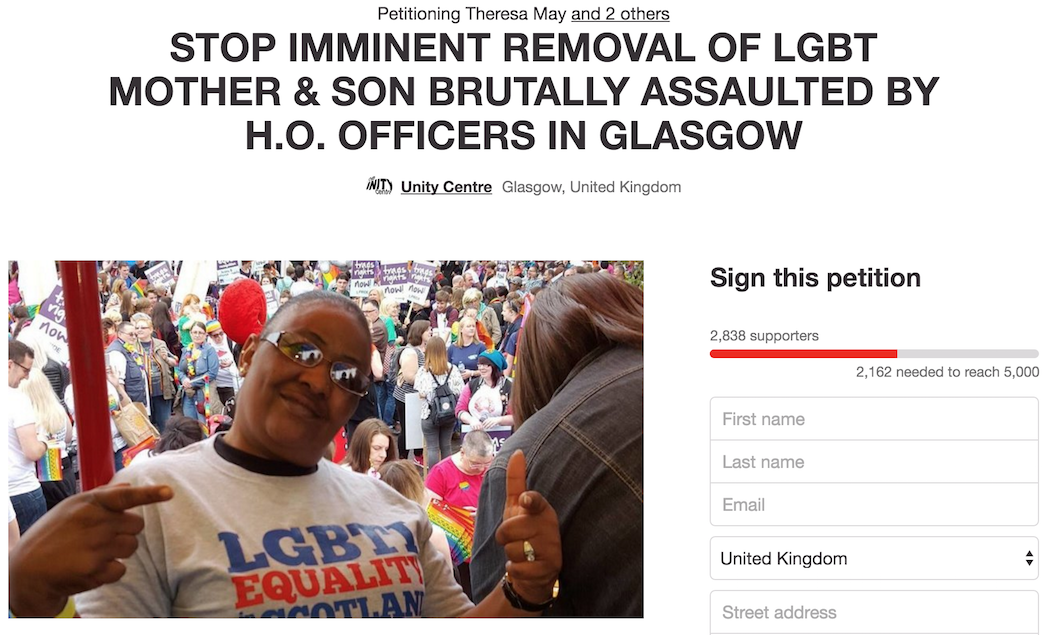 THE DEPORTATION of LGBT asylum seeker Beverly Vaanda Kanjii and her young son has been postponed after campaigners put pressure on the Home Office.

Due to be forcibly removed from the UK on a 11.45am flight along with her 14-year-old son, Beverly Vaanda Kanjii is now being brought back to Glasgow, CommonSpace understands.

The Home Office routinely refuses to comment on individual cases, but CommonSpace spoke to Kanjii at 10.40am today (24 March) and she confirmed that she was being released, after last-minute legal representations prevented her deportation. Kanjii had claimed asylum in 2013 on the grounds that she faced persecution for her sexuality in Namibia.

Two thousand eight hundred people had signed an online petition objecting to Kanjii’s removal, and campaigners targeted the phones and social media channels of the Home Office and airline KLM.

LGBT Unity Scotland – an activist group of which Kanjii is an active member – wrote on Facebook this morning: “Lawyer working on [Kanjii’s] case and lodging a Judicial Review, to avoid another attempt to remove them in a short period of time.
Fight not yet over but this is great news!”

Kanjii, who was arrested along with her son during a dawn raid in Bridgeton on 21 March , is a member of LGBT Unity, a group of LGBT refugee activists who last year were awarded a prize by the Equality Network for their campaigning.

Following her arrest, a blockade was formed at the entrance of the Home Office immigration centre in Ibrox, involving Kanjii’s friends and her Scottish partner. The protest was broken up by police after around 5 hours, enabling immigration officials to take Kanjii and her son to England. Our footage from the scene shows officers using dogs, and pulling apart protestors who were superglued together.

When Kanjii and her son were taken to Cedars detention centre in England to await deportation, campaigners targeted the airline she was due to fly on, and the UK Home Office.

Comments posted to airline KLM’s Facebook page included “deporting 14 year olds can’t be good for business”, and a template message stating that the deportation was “being done against [Kanjii’s] will … This is against their human rights and is immoral.”

Many people also tweeted the airline to object to its involvement in the deportation. KLM responded : “If airlines carry inadmissible passengers, this is always by order of the authorities. That includes KLM. For questions and remarks regarding governmental policies, we refer you to the authorities”.

Questions were asked following the dawn raid on Monday over the involvement of Police Scotland , who said it is ‘routine’ for officers to attend immigration enforcement visits. The SNP oppose the policy of dawn raids, but a spokesperson for the Scottish Government told CommonSpace it was a “matter for the Home Office”.