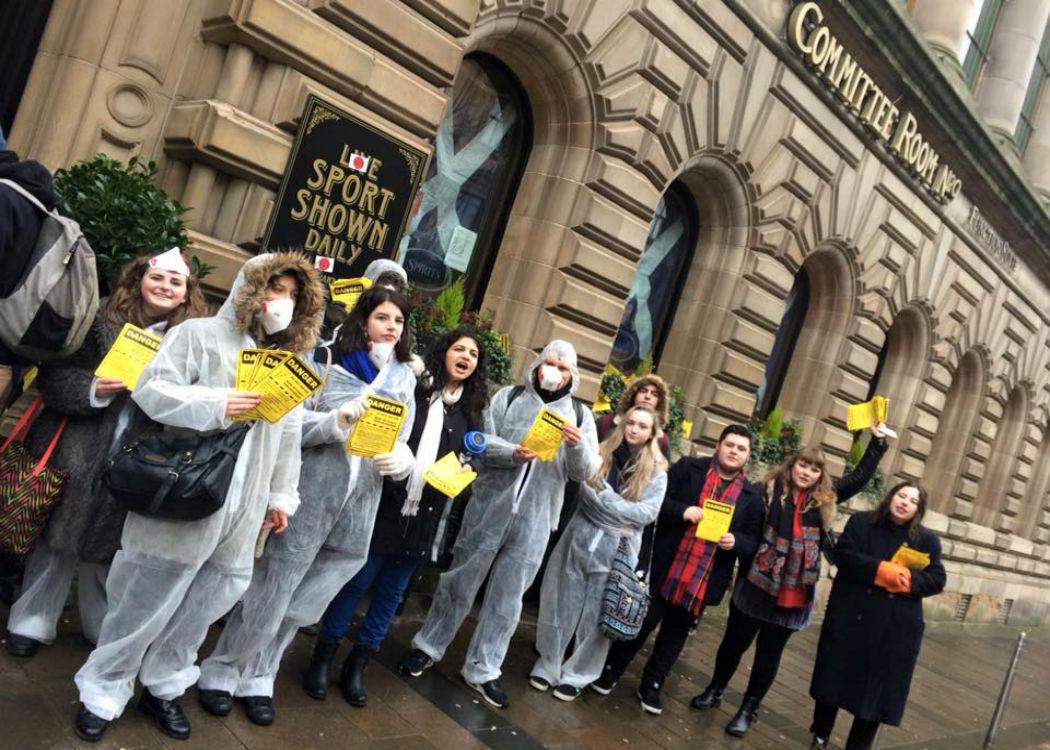 YOUNG ANTI-EXPLOITATION activists increased their pressure on Glasgow businesses on Saturday (13 February) with a rolling protest through the city centre.

Clad in chemical-spill clean up garb, the Better than Zero campaigners put several popular bars and restaurants including Arta, The Social, The Corinthian and the Committee Rooms, under quarantine for what they claimed were exploitative work practices.

In a sign that owners are beginning to fear the campaign, which helped to end a policy of deducting tips from staff at Las Iguanas restaurant in Glasgow , management actively tried to disrupt the protests at more than one venue.

A Better than Zero spokesperson said that the rolling protest represented the beginning of 50 days of action against exploitative bosses, as part of an escalation of the campaign in 2016.

The spokesperson said: “With the UK government’s discriminatory so-called ‘National Living Wage’ looming on the horizon, Better than Zero have launched 50 days of action demanding that employers give all staff, irrespective of age, the higher legal rate at the very least, with our overall call still being for staff to be paid the real living wage of PS8.25 per hour.”

The spokesperson also claimed that the campaign’s high visibility tactics were effective: “Our activists choose to alert the public to the treatment of workers by declaring these pubs and restaurants as ‘hazard zones’. As usual, our creative campaigning methods got lots of attention from passers by who stopped to chat and take leaflets.”

Over several months the Better than Zero campaign has launched a series of imaginative protests against what they say are exploitative work practices in Scotland’s service sector. They have focused their protests against the G1 group, which owns 45 businesses, most bars, restaurants and nightclubs in Glasgow and Edinburgh.