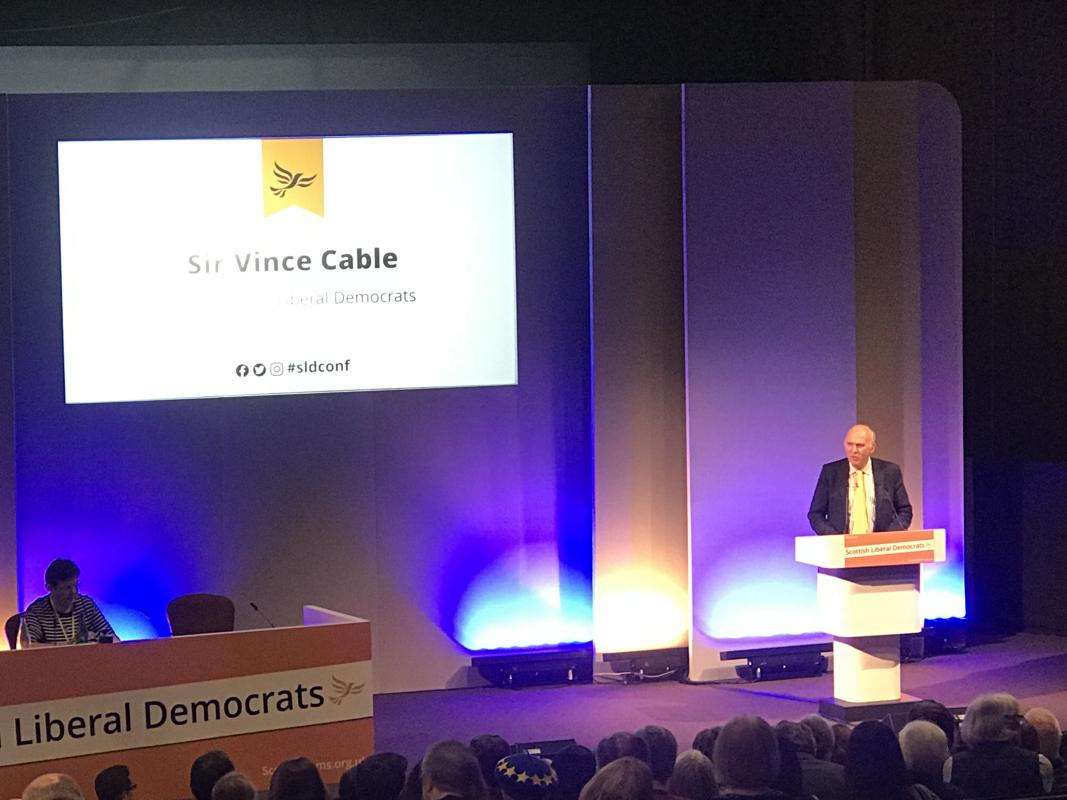 THE SNP should get behind the call for a UK-wide vote on the Brexit deal, Lib Dem leader Vince Cable told the Scottish Lib Dems conference on Saturday [21 April].

Cable used his speech to urge the SNP to back them on getting a referendum on the Brexit deal once the negotiations are completed.

Cable told party supporters that it is very likely that the House of Lords will come forward “with a proposal for a referendum on the final [Brexit] deal”.

“When push comes to shove, I suspect that [the SNP] will find it hard in the House of Commons to vote with the Tories against a People’s Vote.” Jo Swinson

With both the Conservatives and Labour taking a pro-Brexit position and his party demanding a deal from leaving the EU, Cable told delegates: “The key uncertainty is where the SNP is going to fit into all of this, and they got to declare their position, and they have to make a choice.”

Earlier, both Jo Swinson and Christine Jardine told a fringe meeting that the SNP will join the campaign to demand a referendum on the deal to leave the EU.

Swinson, the Liberal Democrat deputy leader, said that the SNP at Westminister has been engaged with the campaign told party members that “when push comes to shove, I suspected that they will find it hard in the House of Commons to vote with the Tories against a People’s Vote”.

The People’s Vote is a campaign group that is calling for a public vote on the deal to leave the EU.

“It is Theresa May and Jeremy Corbyn who both want to drag Scotland out of Europe against our will – not the SNP.” SNP Spokesperson

Jardine said that if the momentum continues to grow for a referendum on the Brexit deal then the SNP will be on board.

The Edinburgh West MP added: “If for no other reason than the Scottish Nationalists cannot resist a campaign where it looks like they might win – whatever it is – they will join us.”

An SNP spokesperson said: “This is ludicrous stuff from Vince Cable who – bizarrely – would rather attack the SNP over Brexit than the Tories or Labour.

“It is Theresa May and Jeremy Corbyn who both want to drag Scotland out of Europe against our will – not the SNP.

“With contributions like this, it is no wonder the Lib Dems are comprehensively rejected by the people of Scotland at election after election.”

Cable also told party activists at the Scottish party’s spring conference that Prime Minister Theresa May should have given the House of Commons a vote on Syria strikes.

In “midst of a humanitarian crisis, and a clear breach of international law on chemical weapons” she would have won the vote in the Commons, he said.

The Twickenham MP added: “But instead she showed just how fragile constitutional conventions can be in the face of short-term political expediency.

“What was also striking was the extent to which the UK was the third wheel.  Where the UK would once have led foreign policy debates of this kind, corralling European allies and building international support, this Conservative Government did little more than sitting by the phone waiting for calls from Paris and Washington.

“So Theresa May is a weakened Prime Minister leading a weakened United Kingdom.” Vince Cable

“So Theresa May is a weakened Prime Minister leading a weakened United Kingdom.”

Last weekend, the UK joined with the US and France in military action in Syria that targeted sites claimed to be used for developing chemical weapons in the country, after the alleged chemical attack in Douma that killed 42 people.

The Organisation for Prohibition of Chemical Weapons (OPCW) spent last week collecting samples from Douma saying that they will “evaluate the situation and consider future steps including another possible visit to Douma”.