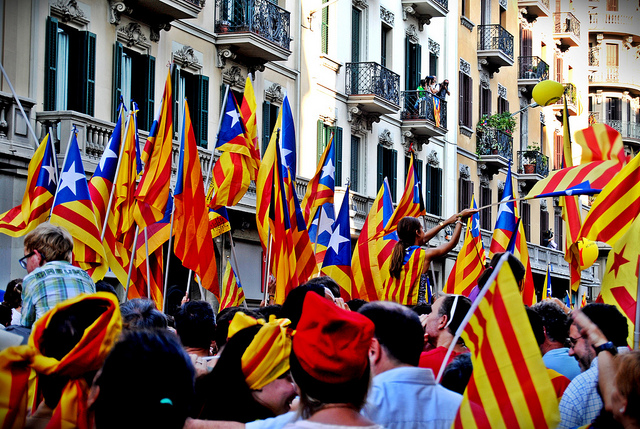 THE CATALAN INDEPENDENCE REFERENDUM on Sunday 1 October saw 90 per cent of voters back independence.

Approximately 2.3 million citizens of Catalonia turned out to vote, of a possible 5.3 million registered voters, although the vote is unlikely to be recognised by the Spanish Government.

This marks the second time in three years that Catalans have voted for their independence – in November 2014, over 80 per cent of over 2.2 million voters supported independence for Catalonia.

Both votes have been held without the consent of the Spanish Government, meaning that the results are not considered as legally valid. This weekend saw the culmination of weeks of attempts by the Spanish Government to block the vote, with police seizing ballots, closing polling stations and using force against voters, in scenes that shocked observers.

“With this day of hope and suffering, the citizens of Catalonia have won the right to an independent state.” Carles Puigdemont, President of Catalan Government

The Catalan leader Carles Puigdemont said the will of the Catalan people had been clearly expressed.

He said: “With this day of hope and suffering, the citizens of Catalonia have won the right to an independent state in the form of a republic.

“My government in the next few days will send the results of today’s vote to the Catalan parliament, where the sovereignty of our people lies, so that it can act in accordance with the law of the referendum.”

Despite the intention of the pro-independence government of Catalonia to push ahead with independence following the result, the Spanish Government continues to deny its legitimacy and describes the vote as “unconstitutional”.

Spanish Prime Minister Mariano Rajoy said: “I can tell you in the strongest terms what you already know and what we have seen throughout this day. There has not been a referendum on self-determination in Catalonia.”

Prior to the vote, the EU backed the position of the Spanish Government on the basis that a legal agreement to hold the referendum had not been reached. It was made clear that the European Commission would only recognise the result if it had been ruled as constitutional, which leaves Catalonia in an uncertain position regarding international support or recognition.

On polling day, rubber bullets and batons were used by police against voters, with Catalan medical officials reporting that over 800 people were injured. Catalan Government spokesperson Jordi Turull described the situation as “state violence unknown to Spain since the age of Franco”.

The events which unfolded led to condemnation by First Minister Nicola Sturgeon, along with other SNP, Green, Labour and Liberal Democrat leaders and politicians.

The UK Government responded to calls to speak out on the situation: “The referendum is a matter for the Spanish government and people. We want to see Spanish law and the Spanish constitution respected and the rule of law upheld.”