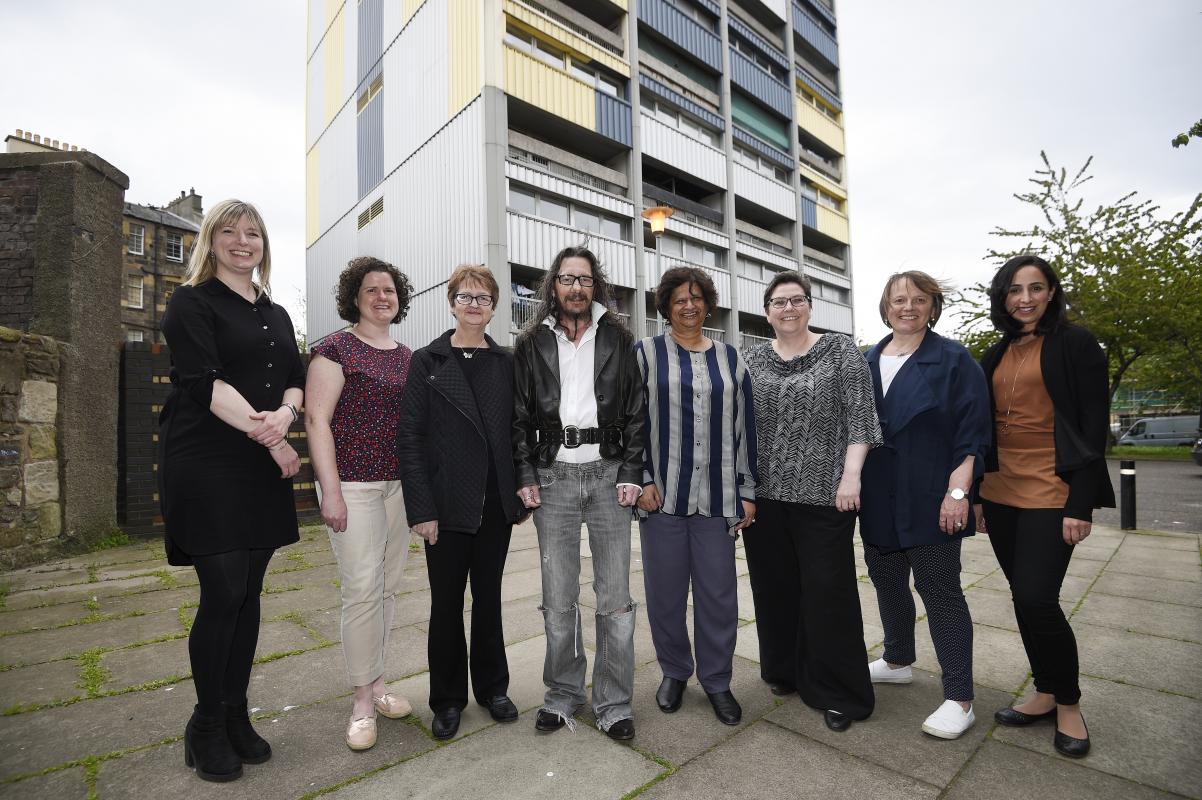 CommonSpace speaks to the Chair of the UN Committee on Economic, Social and Cultural Rights about her impressions of Scotland’s housing crisis

UNITED NATIONS representative Virginia Brás Gomes has welcomed a shift in the mentality of Edinburgh City Council in recognising the human right to housing, after hearing accounts from Leith locals and residents’ advocacy groups that such rights had not been adhered to in the past.

During her three-day visit to Scotland, Gomes – chair of the United Nations Committee on Economic, Social and Cultural Rights – met with Leith residents, whose efforts to assert their basic right to adequate housing have led to comparisons between their living conditions and international human rights standards, and placed responsibility for the shortfall on the City of Edinburgh Council, demanding that improvements be made to address such widespread violations.

Supported by organisations such as the Housing Rights and Practice Project and the Edinburgh Tenants’ Rights Federation, these efforts have resulted in roughly £3m in increased investment by the council.

Having spoken with activists, representatives of the local community and council officials, Gomes told CommonSpace that the local authority now appears to show greater understanding of residents’ rights, but it remains to be seen if the intent can be made “real”.

The goal of the meeting – overseen by the Scottish Human Rights Commission – was for residents “to share the process that has led to a renewed commitment on the part of the council, and an empowerment on the part of the residents. They tried to explain the trust-building process between the council and the residents, which was initially non-existent, and was a more adversarial relationship than it is now.”

Asked about the specific nature of that adversarial relationship, Gomes says the meeting “didn’t dwell much on the past”, but the complaints of the residents have already been well-articulated, particularly in a short film made in 2016.

“The idea was to give me a sense of what it is like now,” says Gomes. “But having been to other projects of this nature before, there’s never one reason [for a breakdown of trust]. And basically, one of the reasons is when people don’t feel consulted enough.”

Gomes emphasises the importance of a strong participatory element in decisions affecting the lives and welfare of residents, whether in Scotland or beyond. “Often, even when changes are made, the participation that is sought from the rights-holders themselves is very ‘token’ participation. What I liked to hear yesterday was that the consultation was meaningful.

Gomes notes the evident pride of the council representative she met with, following the relationship that had been built with residents in her community, but acknowledges: “There’s always an issue of whether it’s an individual attitude, or a more systemic change. And I was given to understand yesterday that there is a more systemic change also. It’s in the making, it’ll probably take time, but there is greater accountability.”

Given the success in this instance of local advocacy groups, and the growing pressure applied by campaign organisations like Living Rent, does Gomes believe there is a limit to what such activism can achieve? How much responsibility falls on local or national government, instead of the residents themselves, in effecting change?

“The government is duty-bearing, in this case,” says Gomes. “I think what became clear yesterday, what they’ve been working at, is to bring the residents and the duty-bearers together with a common objective. Of course, the government will generally have issues of resources and priority-setting, but I don’t think there’s really a limit to people’s participation – it depends on trust. If that trust is increased, I think there’s no end to what can be accomplished.”

“From what I heard from the residents of Leith yesterday, the right [to housing] was not being ensured.” UN representative Virginia Brás Gomes

Gomes was unable to meet with Nicola Sturgeon during her three-day trip to Scotland, but says that the First Minister did send her a “very kind” letter, expressing her regret that they had missed each other.

“But there seems to be a good understanding of economic, social and cultural rights, and the will to move [on these issues],” she added.

Given her expertise in the arena of human rights, and based on what she has seen and heard, were the human rights of residents in Leith and Edinburgh being violated by those with a duty to oversee their housing?

“From what I heard from the residents of Leith yesterday, the right [to housing] was not being ensured,” responds Gomes. “The housing conditions were extremely bad, and I don’t think there was an understanding of the right to housing, as such. Now, there is an understanding this is a right, and we need to look at how to make it real, which is already a step forward.

“This conceptual clarity that housing is a right, which I think is shared by the council now, makes a very good ground to start building.” Putting that right into practice, however, “is not devoid of difficulty,” Gomes says.

Speaking ahead of a meeting with Scottish Government officials and representatives of public bodies in Edinburgh on 21 May, Gomes also expressed her support for the need to incorporate more rights into Scots law, saying: “I am keen to see Scotland advance incorporation and justiciability of rights because it is the best way to realise economic, social and cultural rights for all, especially those most in need of protection by the state.”

Asked about the feasibility of doing so while a range of powers remain reserved to Westminster, Gomes described it as “very difficult.”

“I really made a huge effort to understand the competency issue – of what exactly is devolved,” Gomes continues. “But I had a big problem in understanding. Legally, it’s a complicated model – where, for example, only certain social security benefits are devolved. It’s very difficult to work on that basis; either you have responsibility for the system, and you can take a holistic approach, and think of the right [to housing] in a different way, or you don’t.”

Despite her recognition of a changing mindset on the part of the local authority, Gomes nevertheless expressed concern when considering some of the facts surrounding housing in Edinburgh, particularly with regard to provisions for the homeless. In the capital, less than one in three homeless people are placed in social housing, with the rest typically being put into bed and breakfasts, hostels and the like, for which Edinburgh City Council pays out £120,000 per week. Edinburgh social housing for the homeless has fallen seven per cent in a single year, while Winter Care Centre run by Bethany Christian Trust has seen a 132 per cent rise in usage in Edinburgh since 2012/13, with its facility often too full to take any more. The average waiting time for homeless applicants to secure a social rented property is 12–18 months.

Faced with these stark realities, Gomes states that “it sounds like social housing is worth investing in.”

After noting that there is much available land in Scotland which could be used to address such issues, Gomes recognises the link between land reform and the possible expansion of social housing, as have many Scottish activists. However, Gomes observes, the notoriously vast amount of Scotland’s land which remains in relatively few private hands is not a unique phenomenon.

“That’s not only Scotland. When a lot of land is in the hands of only a few people, it’s doesn’t create a good environment. I’m not saying people can be dispossessed of their land, but there are many ways of doing it.”

Asked if there were any national models of social housing that Scotland might look towards, Gomes answers: “I can’t give you a finished model, but in many countries, particularly in Europe, there was a great push towards private ownership. Anyone who had any possibility of doing so would buy a house. This has changed; there’s greater mobility now. The mobility approach has changed many habits.”

Gomes says that this new sense of mobility is particularly evident among young people, who following the 2008 financial crash have virtually abandoned any notion of home ownership. “So in many countries, there is now an understanding of the need for social housing and controlled rents, so that people who do not buy can decide what they want to do.”

“There are a lot of alternatives,” says Gomes, “but I think there’s a renewed understanding of the need for social housing of good quality – that’s the difference. Because years ago, social housing was regarded as a benefit from the state, not a right. You were supposed to feel grateful if the state gave you a place to live. I think that mentality is changing.”