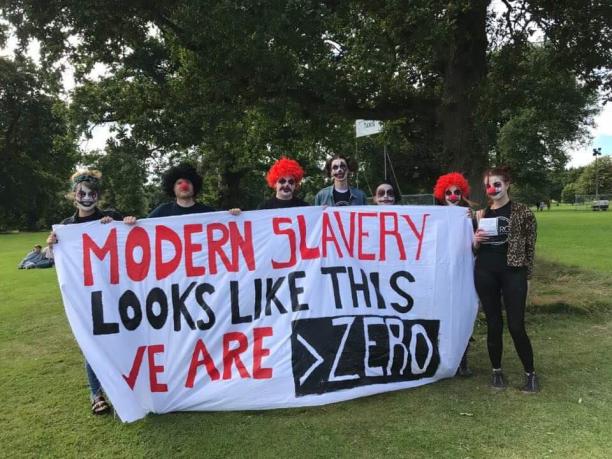 MORE than half of young workers in Scotland receive lower wages than their co-workers, despite doing the same job, a new survey by the STUC youth committee has found.

The report, ‘W/age Rage: The minimum wage and young workers’, has been published on day two of the STUC’s annual congress in Dundee, and finds that 55 per cent of young workers responding to the survey said they get paid less for the same work.

“The UK’s Minimum Wage law devalues young workers and allows employers to exploit their labour on the cheap”, the report finds.

Speaking to CommonSpace following the publication of the report, Eilis O’Keefe of Glasgow University Students’ Representative Council (GUSRC) said that it isn’t just the minimum wage that encourages age brackets within the workplace.

READ MORE: Liam McCabe: Why the students’ movement is linking arms with the workers’ movement to fight exploitation

O’Keefe said: “There’s many jobs in which young people are paid over the minimum wage but there’s still an age bracket to which others are paid more.”

In low pay work places like Debenhams and McDonalds, for example, employees are being paid around 20p more than the minimum wage but the difference between 18 and 21 years old’s hourly rate remains large.

“I’m 22 and at one point I was being paid £5.15 an hour which is under the minimum wage,” O’Keefe added. “I’ve been living away from home since I was 17 and I’m in huge amounts of debt. The pressure of paying for food, rent and bills have influenced every aspect of my life, especially when I had to work 50 hours a week just to get by.”

A study from the BBC found that there has been a 68 per cent rise in students seeking help for their mental health between 2013 and 2017, relating to anxiety and depression. It was recorded that the number of students reaching out for help in Glasgow University increased 75 per cent within this time frame while in Edinburgh University the number increased from 1,493 to 3,002 – more than doubling with just five years. NUS Scotland have said that student mental health is worsening because of exam stress, part-time working and debt.

Christina Brown, a student at the University of the West of Scotland (UWS), told CommonSpace that this rise in ill mental health can be linked to the low wages given to young people.

“I firmly believe that paying someone who is living on their own anything less than the living wage is going to take a toll on their mental health,” she said. “Struggling to keep a roof over your head, pay for a social life but also keep up with studies and pay for resources is causing many people I know severe stress.”

Another student from UWS, Amy (name changed), said that she found pay discrimination based on age “unfair”.

“I work in Debenhams part time and although we are paid above the minimum wage, it differentiates between age groups,” Amy said. “I find it unfair that my colleague who is a university student and lives away from home is paid less than me, even though I still have the support of my parents and I’m 20.

“We work the same hours, carry out the same job and use the same skills. I don’t understand why the government assumes that everyone ages 18-20 is in any less of an independent situation than a 21-year-old.”

The STUC Youth Committee report found that over a third of young respondents are living outside the family home and thus must pay their own housing costs. They also discovered that 58 per cent of students said they find it difficult to afford the basics in life, such as food, transport and bills and several respondents mentioned that they had debt, ranging from £450 to £26,000.

Anthea Koon, chair of the STUC Youth Committee, said: “Something is shifting in the culture of low paid workplaces. Young people are starting to reject the idea that they are at the mercy of their bosses and are joining trade unions in numbers we haven’t seen before. We are seeing the injustice for what it is and we are no longer going to sit back and be unfairly treated.

“There are signs that young workers are finding better ways to win more pay, rights and respect. Wage rage will keep growing and unions will be ready to support workers in the fight to end poverty pay.”

O’Keefe said the overwhelming uproar from young workers would inspire others into standing up for their rights.

“Young people are becoming aware of their rights and are inspired to stand up for what they believe in. They’re told that their work is worth less than someone who is older which is not the case,” she said.

Stella Rooney from Unite Hospitality Dundee said that they are organising so that they can “determine the standards that we want to work in”.

She said: “In Dundee we are developing a new kind of network for people working in the industry to share experiences, learn their rights, and above all build up the skills and support to improve our work.

“If one of us goes to a boss with an issue we risk putting our livelihoods at risk, but by coming together we are able to determine the standards we want to work in.

READ MORE: STUC youth conference: There is no case for young workers to be paid less than older colleagues

“Every union once began as a group of workers coming together against the odds to call for better terms, that is what we are doing in Dundee.”

The STUC Youth Committee and the Better than Zero campaign are inviting young people to join training days to provide help and advice on how to organise at their workplace and “take control”.

Picture courtesy of Better than Zero