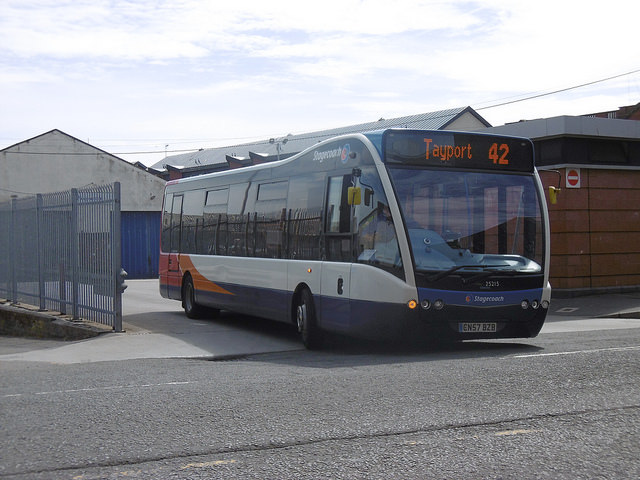 ENVIRONMENTALISTS have said that transport statistics published today must be a wake up call for politicians to tackle the chronic decline in bus usage, the number one mode of public transport in Scotland.

The Transport Scotland statistics show bus passenger numbers have fallen by 7.5 per cent over the past five years, while the number of motor vehicles reached its highest level ever in Scotland at three million.

While two-thirds of commuters travel to work by car or van, bus journey in the South West and Strathclyde regions have declined 10 per cent in five years, with the cost of a bus fare up 18 per cent over the same period of time.

Campaigners have criticised the draft Transport Bill for not going far enough to support public ownership in Scotland’s bus sector, privatised under Margaret Thatcher during her tenure as Prime Minister. The Bill would see council buses only on routes deemed unprofitable by the private sector.

Transport is also Scotland’s biggest contributor to greenhouse gas emissions, and the level of emissions from the sector has changed little since 1990. The committee for climate change warned the Scottish Government in its progress report that transport would be one of the sectors where emissions reductions would have to come to fruition soon if it is to meet its climate targets.

Commenting on the figures, Gavin Thomson from Friends of the Earth Scotland said:

“These statistics paint a grim picture of transport in Scotland. Years of short-sighted decisions by politicians and planners have meant cars dominate our transport system at the expense of accessibility, public health and our climate.

“The continuing freefall of bus passenger numbers is a wake-up call to our politicians: we need to fundamentally change our attitude to buses. It needs to be seen as a public service, necessary to improve air quality, congestion, and ensure everyone can get where they need to go and participate fully in their community.

“Bus users have seen fares rise by 18 per cent in just five years. No wonder the number of passengers has dropped so dramatically. MSPs need to take the opportunity of the Transport Bill to give Councils the powers to run their own bus services and meet the needs of people in their local areas.”

Friends of the Earth Scotland have estimated 2500 people die early in Scotland from air pollution alone.

Gina Hanrahan, head of policy at WWF Scotland, said the statistics showed the need for “bold” action, supporting the deal agreed by the SNP and Scottish Greens in the 2019-20 Budget to give councils the power to introduce a workplace parking levy, a move strongly criticised by trade unions Unite and GMB.

Hanrahan said: “Transport is Scotland’s biggest source of damaging climate emissions and these figures are firmly going in the wrong direction. Air travel and car travel are at their highest ever recorded levels while bus use has fallen and cycling has seen a 6 per cent drop over five years.

“It’s clear we need bold action to support people into cleaner forms of transport to tackle climate change, clean up our dirty air and enhance public health. Solutions such as workplace parking levies are a modest but important part of the change.”

Smyth said: “Fares have soared across Scotland because of the SNP’s cuts to support for buses – hitting working class people in the pocket.

“While the SNP hand hundreds of millions of pounds to Abellio to mismanage our railways, there has been a complete failure to invest in bus services, which provide vital routes for deprived communities and older, more vulnerable people.  It is little wonder that bus usage has plummeted under the SNP and our bus network is being dismantled route by route.

“It is time for public transport to put passengers before profit.

“That is why Labour will seek to amend the government’s timid Transport Bill to deliver greater community ownership of buses to reverse the decade of decline in bus usage under the SNP.”

Scottish Greens MSP Patrick Harvie said those figures showed the Scottish Government’s policy of reducing Air Passenger Duty by 50 per cent and eventually scrapping – yet to be introduced due to question marks over whether EU state aid rules would allow for exemptions for the Highlands & Islands – was “absurd”.

Harvie said: “The transport statistics show that the number of air passengers increased dramatically in the last five years. In light of this, the Scottish Government’s absurd plans to give a tax break to the highly polluting aviation industry should be scrapped.

“In the face of the climate crisis, Ministers should not be focussing their efforts on placating the only transport industry that is already free of fuel duty.”

Cabinet Secretary for Transport, Infrastructure and Connectivity Michael Matheson responded to the statistics by saying he was “concerned” about bus use falling, but said the Transport Bill would help address this problem.

Matheson stated: “Today’s statistics illustrate why our current policies to develop a more sustainable transport network in Scotland are so important – and I believe that through the steps we are taking to empower local authorities and support greener travel, we can work together to shift behaviour by encouraging more people out of their cars and on to public transport, walking and cycling.

“Although the majority of public transport trips are made by bus, I remain concerned that bus use continues to fall – and this is a trend we see across the UK. We are continuing to spend over £250 million a year to support our vital bus industry, working with operators to keep fares at affordable levels and providing free bus travel to older and disabled passengers.

“Additionally, the forthcoming Transport Bill will empower local authorities by providing options to improve bus services in their areas – giving them a greater choice in how to deliver a sustainable bus network for customers.

“By spending over £1bn a year on public transport and providing flexible options for local authorities through the Transport Bill, this government will continue to support our essential public transport network and work to bring about a more sustainable transport system for all.”