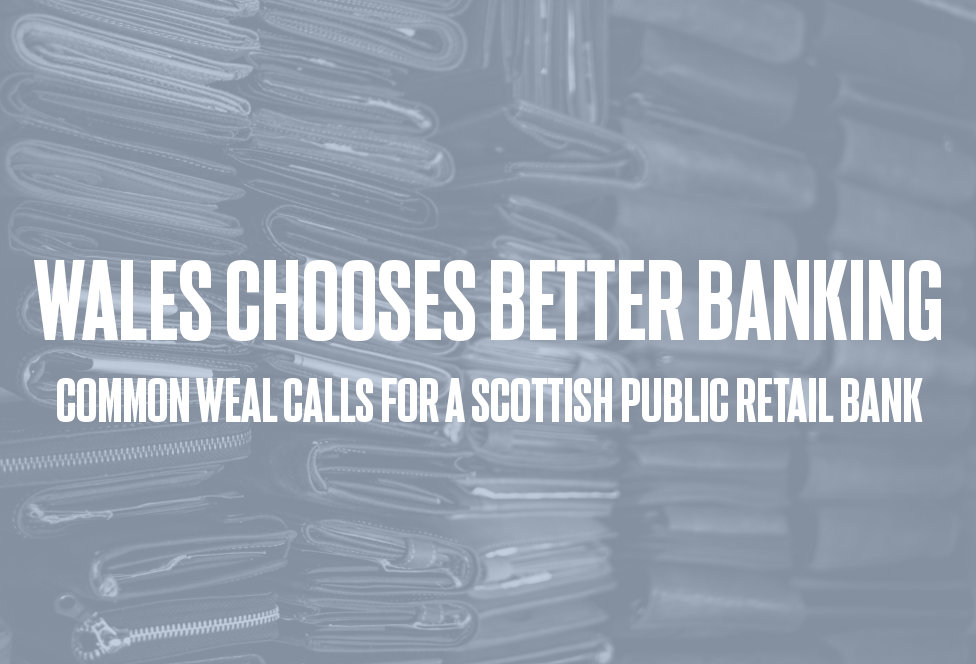 Common Weal congratulates the Welsh Government for taking steps towards founding a network of community mutual retail banks and calls on the Scottish Government.

In 2016 Common Weal proposed that Scotland should reform its banking sector so that it worked for the Common Good. This would involve setting up a network of local community banks to maintain a physical retail banking services in our communities – especially in those hardest hit by the steady withdrawal of the commercial banks since the Financial Crash.

In 2019 we followed up this proposal by presenting a solid blueprint – developed by the Community Savings Bank Association – showing how this could be done with a community-led “bank-in-a-box” model which, given sufficient political support and will, would allow Scottish communities of any size to be able to found their own retail bank, mutually owned by its own customers.

The Welsh Government has been developing parallel plans for community banking and have been working with the Community Savings Bank Association to establish their own community mutual banks based on precisely the same foundational blueprint from which Common Weal’s proposals have been developed.

This blueprint involves taking an off-the-shelf set of charters, business plans, IT system links and other infrastructure that allows a bank to operate – thus greatly reducing the complexity of setting up a new bank. Communities can then study their area to find out many potential customers they could attract to the new bank. If the customer base is above a certain threshold then this indicates that a full physical bank branch would be viable in that community. If not, then a more limited “bank pod” has been developed which installs an ATM and a video call service inside a space as small as a container unit.

Unfortunately,  our proposal has so far received limited attention or support from the Scottish Government, despite Scotland being one of the hardest hit areas in terms of the withdrawal of retail banks and even of basic cash services such as free-to-use ATMs.

Access to cash and access to retail banking services is absolutely vital for communities. Small businesses are often highly reliant on cash processing services to be able to do business – and this is even more crucial in remote rural areas where the closure of a local bank can mean trips of many miles to the next one and where internet connectivity is often more limited than in cities which can preclude digital services even where it would be desirable.

The retreat of the physical bank branch has also led to a more subtlety deleterious shift in banking services. Digital apps and internet banking have given rise to so called “transactional banking” where you can be granted a loan at the click of a button on a mobile phone. Your ability to pay back that loan is rendered down to a (possibly opaque) “credit score” and your actual need for the loan probably not considered at all. All that matters is that the bank is able to make a profit from you.

This stands in contrast to “relationship banking” where the community owns the bank branch and the staff are themselves embedded in the community. Services can be based not just on the ability of the customer to pay but also on the needs of the community itself. This model, still popular in countries like Japan, will lead to more stable and more robust local economies, changes made to better suit the community and the security that the services will last as long as the community wants them, not until a distant shareholder decides that they’d make more profit by shuttering them.

Now that Wales has shown that it is perfectly possible to find the political will to support a financial sector which works for the people and communities of Scotland, Common Weal are again calling for the Scottish Government to look at these plans and to launch a Scottish Mutual Retail Bank as soon as possible. With political party conference season again approaching in the Spring and with the Scottish Parliamentary elections coming in around 18 months, it is also time for members of all progressive political parties to bring this idea to their party branches and to their conferences to make sure that this idea makes it on to party manifestos. Common Weal stands ready to assist any group who wishes to help Scotland choose Better Banking too.