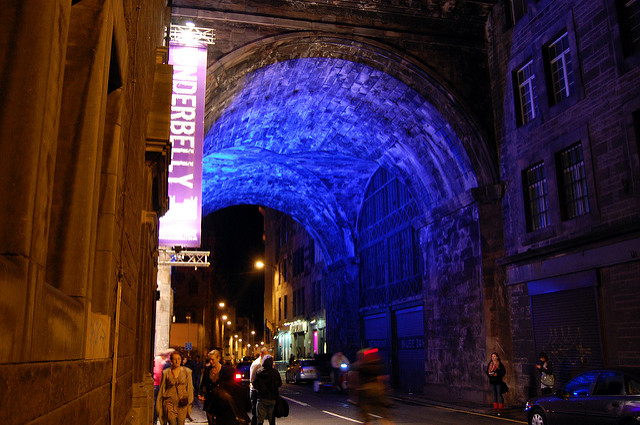 UNDERBELLY, one of the biggest venue operators and events promoters at the Edinburgh Fringe, have strongly denied accusations of unfair employment conditions made by Unite Scotland hospitality organiser Bryan Simpson on behalf of the Fair Fringe campaign, who defended his criticisms of the company.

CommonSpace reported on Wednesday on a Fair Fringe report based on a survey of festival workers, which revealed that many work schedules breach the legal limit on working hours and more than half of staff receive less than the minimum wage, in what Simpson described as “systematic exploitation of staff”.

Simpson claimed that Underbelly, one of the so-called ‘Big Four’ venue operators during the Edinburgh festival season, were going to use unpaid volunteers despite efforts to get them to sign up to the Fair Fringe Charter, which the SummerHall venue has signed up to.

Responding, Underbelly argued via a press statement released by the Corner Shop PR agency: “Not for the first time Unite has publicly accused Underbelly of unfair employment conditions and, once again, it is absolutely untrue.”

Underbelly further claim that they “have not had any communications from Mr Simpson or Unite in relation to the Fair Fringe this year.”

“We believe it is extremely important that those who work at the Fringe are treated fairly and we take exception to any suggestion that we do not so.” Underbelly press statement

The Underbelly statement continues: “We believe it is extremely important that those who work at the Fringe are treated fairly and we take exception to any suggestion that we do not do so.

“There are organisations at the Fringe who do not treat their employees fairly. Underbelly is not one of them.

“Underbelly employs 470 people at the Edinburgh Fringe and we’re very proud that we bring significant employment to Edinburgh.”

READ MORE: Exclusive; Underpaid, overworked and kept ignorant of their rights: the exploitation of Edinburgh Fringe workers – and the fight against it

In detailing the conditions of its employees, Underbelly have stated that all staff are paid the enhanced national living wage “or more”, regardless of age; that there is no use of volunteers by Underbelly at the Edinburgh Fringe; no zero hours contracts; paid breaks and training; and that 100 per cent of tips go to staff.

Characterising Simpson’s statements as “lies”, Underbelly described the claims as “upsetting and unfounded.”

Simpson retracted the claim that the union had made attempts recently to contact Underbelly about its employment practises (with the last contact being with Underbelly’s former director Charlie Wood in December last year), but defended his remarks that the company has “unfair employment conditions”.

“This is true because they do,” Simpson told CommonSpace, adding that he considered Underbelly’s statement to be a “personal attack” on him.

Simpson went on to refer to a controversy in November of 2017, when Underbelly – which in March of last year won the £800,000 contract to run the famous Edinburgh Hogmanay street party for the next three years – was urged to stop using volunteer labour, after advertising for 300 unpaid positions that would require volunteers to work in exchange for travel expenses and a personalised certificate. Unique Events, which previously hosted the Hogmanay festivities, confirmed that it had never used unpaid volunteers at previous New Year’s celebrations.

Simpson told CommonSpace: “In July last year, the company advertised for almost 300 unpaid volunteers to work for 12 hours as ambassadors without any wages. I doubt that any reasonable person would regard being asked to work in the freezing cold for three shifts for free as ‘fair employment conditions’.

“This was not only in contradiction to the Volunteer Scotland Charter which states that volunteers should never be used to replace previously paid staff but it may have been illegal. Section 44 of NMW Act (1998) is quite clear that the only organisation exempt from paying the NMW are charities, voluntary organisations, associated fund-raising bodies or statutory bodies. Underbelly was and still is a Private Limited Company which pocketed £419,478 for its 3 shareholders in 2016. It does not fulfil any of the legal definitions which make it exempt from paying the National Minimum Wage.”

“If they wish to engage with the Fair Fringe campaign and prove that they are indeed ‘one of the best employers at the Fringe’ then they should put their money where their mouth is and sign-up to our Fair Fringe Charter.” Unite Scotland hospitality organiser Bryan Simpson

Mere days before the 2017 Hogmanay event took place, it was reported that Underbelly had agreed to pay wages to dozens of volunteer ‘Hogmanay Ambassadors’ and pull adverts for nearly 50 volunteer manager and supervisor positions, following talks with trade union leaders and festival organisers, as well as an intervention by First Minister Nicola Sturgeon, who said she expected event organisers to abide by the Volunteer Scotland Charter.

Describing these previous interactions with Underbelly, Simpson says: “On 21 December we met with their previous Director Charlie Wood regarding their use of unpaid volunteers. It was only after this meeting and the public pressure which ensued that they agreed to pay some staff.”

Correspondence from Wood to Bryan Simpson, then acting on behalf of Better Than Zero and Unite, seen by CommonSpace appears to confirm that this meeting took place.

Simpson continued: “If they wish to engage with the Fair Fringe campaign and prove that they are indeed ‘one of the best employers at the Fringe’ then they should put their money where their mouth is and sign-up to our Fair Fringe Charter which ensures (amongst others) that staff are paid the real living wage of £8.75.”

The Fringe is one of the biggest cultural festivals in the world, and runs in Edinburgh throughout the month of August.