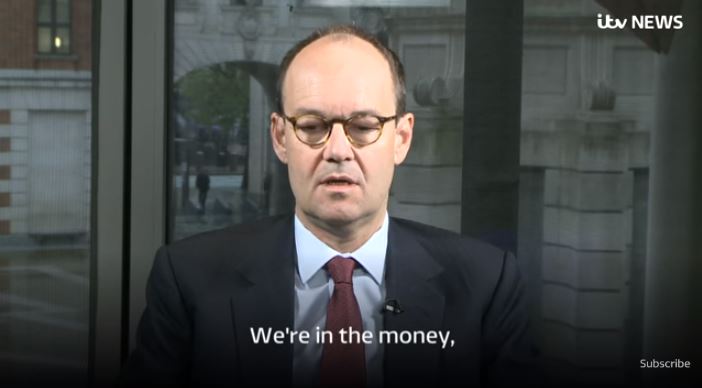 PREPARING for a TV interview after it was announced supermarket giants Sainsbury’s and Asda would be merging, Sainsbury’s boss Mike Coupe was caught on camera singing an ode to corporate greed.

Despite warnings from trade unions that thousands of workers are worried about job losses and pay cuts, Coupe was caught on camera singing his ode to corporate greed – “we’re in the money”.

Watch Sainsbury’s CEO sing “we’re in the money” while waiting to talk about the £12 billion merger with Asda – he’s since apologised for his “unguarded moment” https://t.co/Kuaowz0q1u pic.twitter.com/jYMngcahS2

Coupe’s candid camera moment came in a break between dozens of broadcast interviews explaining Sainsbury’s merger with Asda, which will see the company jump into the top spot in the supermarket war, overtaking Tesco with annual revenues of £51bn.

GMB, the trade union which represents a majority of Asda workers, was critical of the CEO on Twitter, posting: “What on earth will ASDA workers who are worrying about their futures tonight think of this? This is not only crass, it’s unprofessional and insensitive. Is Sainsbury’s takeover of ASDA about people – workers and shoppers – or just more £££ for its boss?” #asdasainsburys

In 2016, Coupe was reportedly rewarded an 86 per cent pay rise, compared to the paltry 4 per cent offered to shop floor staff. After collecting his bonus, it is estimated he took home over £2 million.

The proposed deal is likely to attract significant scrutiny, with competition authorities having a final veto on whether it can go ahead.

Labour’s Rebecca Long Bailey MP,  shadow secretary of state for business, energy and industrial strategy warned that it could leave shoppers worse off:  “This merger risks squeezing what little competition there is in the groceries market even further and moves alarmingly close to the creation of a supermarket monopoly.

“It will be shoppers that suffer from rising prices and workers that will fear for their jobs if this goes ahead.

“The proposed merger should be investigated by the Competition and Markets Authority as a matter of urgency.”

The grocery market industry, over 70 per cent of which is dominated by the ‘big four’ supermarkets Tesco, Asda, Sainsbury and Morrisons, became increasingly concentrated until 2012, when low-cost rivals Aldi and Lidl and luxury rival Waitrose began to grow.

The big four were fined more tha £166 million by the Treasury in 2007 for dairy price fixing, a schema which it is predicted cost consumers over £270 million.

Sainsburys have claimed the proposed deal would not lead to store closures or job losses, and would see consumer prices fall.

Coupe released a sheepish statement after the film was released, saying the choice of song was “unfortunate”.

“This was an unguarded moment trying to compose myself before a TV interview. It was an unfortunate choice of song, from the musical 42nd Street, which I saw last year, and I apologise if I have offended anyone,” he said.