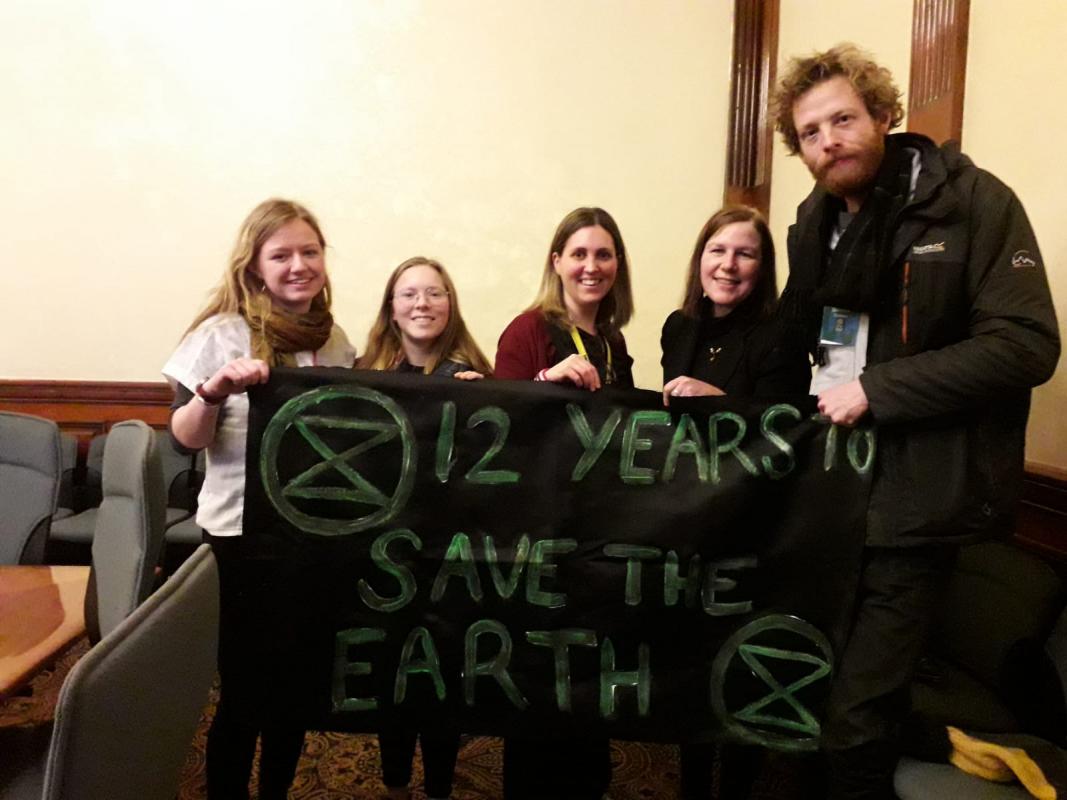 DIRECT protest action by Scottish climate activists has won them representation on a new group being established by Glasgow City Council (GCC) to investigate the council’s response to the global climate emergency.

The Council’s environment, sustainability and carbon reduction policy committee first met in Summer 2017 to discuss the establishment of a climate emergency working group, but has yet to define the terms of a declaration of climate emergency, as other councils have.

Though protesters were initially greeted with concern ll with some councillors leaving the disrupted meeting, and a complaint that it is “not the done thing to interrupt meetings” by the chair, the protest group were then invited to join the next meeting of the climate emergency committee on 26 February.

Speaking at the council meeting, Bowen said: “We are here today to tell you that urgent and radical action is needed now.

“We have come to this meeting to highlight the fact that climate breakdown is going to destroy this city, devastating our generation and any future generations that may or indeed may not come.

Ross Greer MSP: Climate crisis will define my adult life – revolution is the only adequate remedy

“These impending ‘disasters’ you will be discussing as part of the climate emergency working group – such as infectious diseases, extreme weather, chemical or radioactive leaks, biodiversity and species loss, mass human displacement and the expectation of many climate refugees – are all caused by climate breakdown.

“Everyday adults and children in our city, are being poisoned in Scotland’s most polluted street, Hope St, where we’re having to wait three years for a low emission zone to be fully implemented. Where is the urgency? Your 2037 carbon neutral commitment is too little, too late. We demand that you commit to net zero carbon by 2025.”

“This committee for the ‘Establishment of a climate emergency working group’ was formed 18 months ago and you are still drafting terms. Where is the urgency? We need you to act now.”

The speech further urged GCC to join 23 local authorities in England by declaring a climate emergency and committing to new net zero carbon targets. Many local governments around the world are declaring an emergency, as part of a campaign by activists to put pressure on local and national politicians, but Glasgow would be the first in Scotland to follow suit.

The Intergovernmental Panel on Climate Change (IPCC) report released last October found that keeping temperature rises to no more than 1.5C above preindustrial levels would prevent the worst damage from global climate change, but requires massive changes in the global economy.

Extinction Rebellion claim that we have just 10-12 years to make the necessary changes, and have called for there to be mass-participation in Citizen Assemblies so that the crisis can be discussed openly and democratically.

They organised a model assembly at the Scottish Parliament in January to demand urgent national action against climate change.

GCC were contacted for a response to the protest and the granting of representation to Extinction Rebellion but had not responded by time of publication.