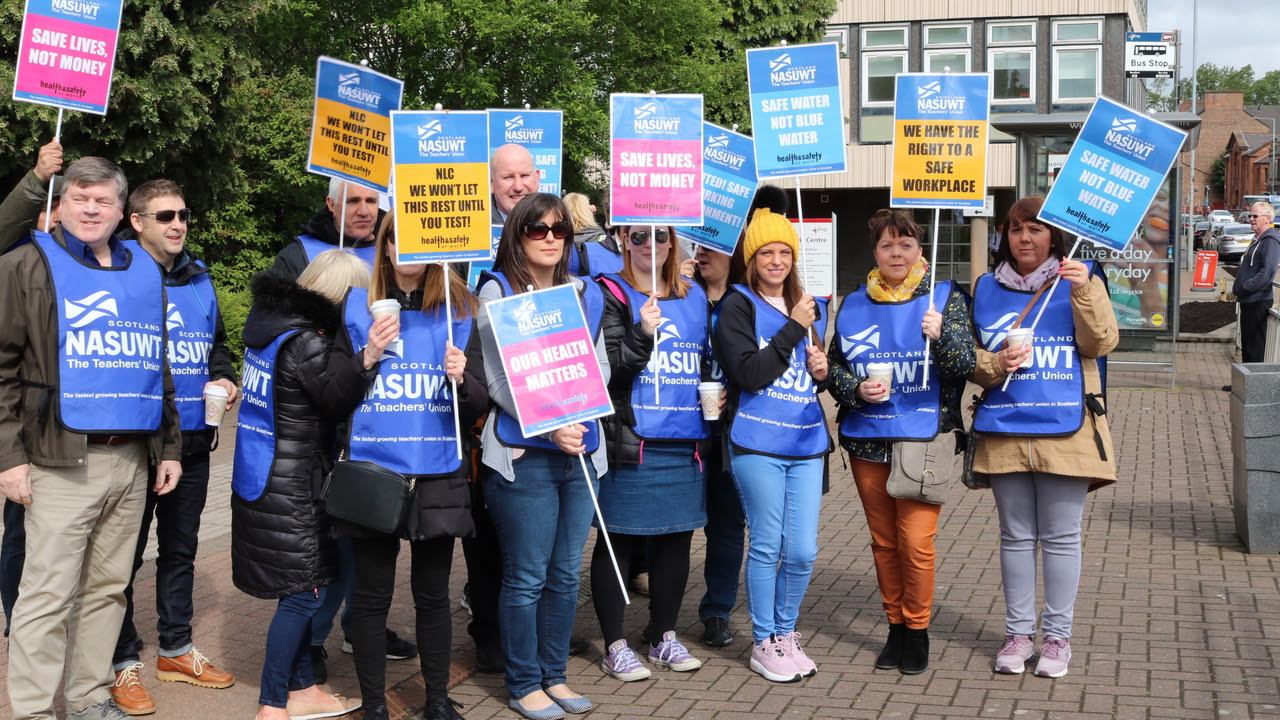 TEACHERS at one of the Coatbridge schools at the heart of the ‘blue water’ controversy have walked out on strike, causing the school to close its doors to pupils.

Members of the NASUWT at Buchanan high school organised a peaceful protest at the North Lanarkshire Council headquarters in Motherwell, calling on councillors to close the school early for the summer and launch fresh testing in the school grounds, which were used as an industrial waste site until 1972.

The strike follows revelations that four teachers at the school have fallen ill with the same rare form of cancer. Buchanan and the adjoined St Ambrose high school have been the focus of concern for teachers and parents alike, due to water running blue from the school mains supply and clear signs of subsidence at the large school complex completed in 2012. Concerns had been raised about the site prior to the Labour-run Council signing off on construction in 2009.

Speaking to CommonSpace at the union lobby, NASUWT National Officer Jane Peckham said: “Members are on strike today because they do not feel safe in the workplace, and we’ve been working with the council over the last year or so to try and get categorical assurance that the workplace is safe.”

“We made two requests, we asked the council to undertake updated tests for soil and air quality and water testing – but in addition to close the two schools early so the time was available to undertake this. The council did not agree to that and have not agreed to the testing.”

At the school, pupils and parents also staged a protest in solidarity, demanding that fresh testing takes place and that they are given free health screenings.

CommonSpace reported last week on parents looking in to private health tests but finding the costs to be prohibitively expensive.

The Scottish Government has announced an investigation into the schools, but the NASUWT union have urged that fresh testing cannot wait until that investigation concludes.

Sixteen teachers are on strike between 20-28 June, and will be joined by a further 24 from St Ambrose from Tuesday 25 June.

North Lanarkshire council has continued to insist that testing has already demonstrated the schools to be safe. However the union and campaigning parents insist the tests are out of date and do not provide adequate assurances of safety.