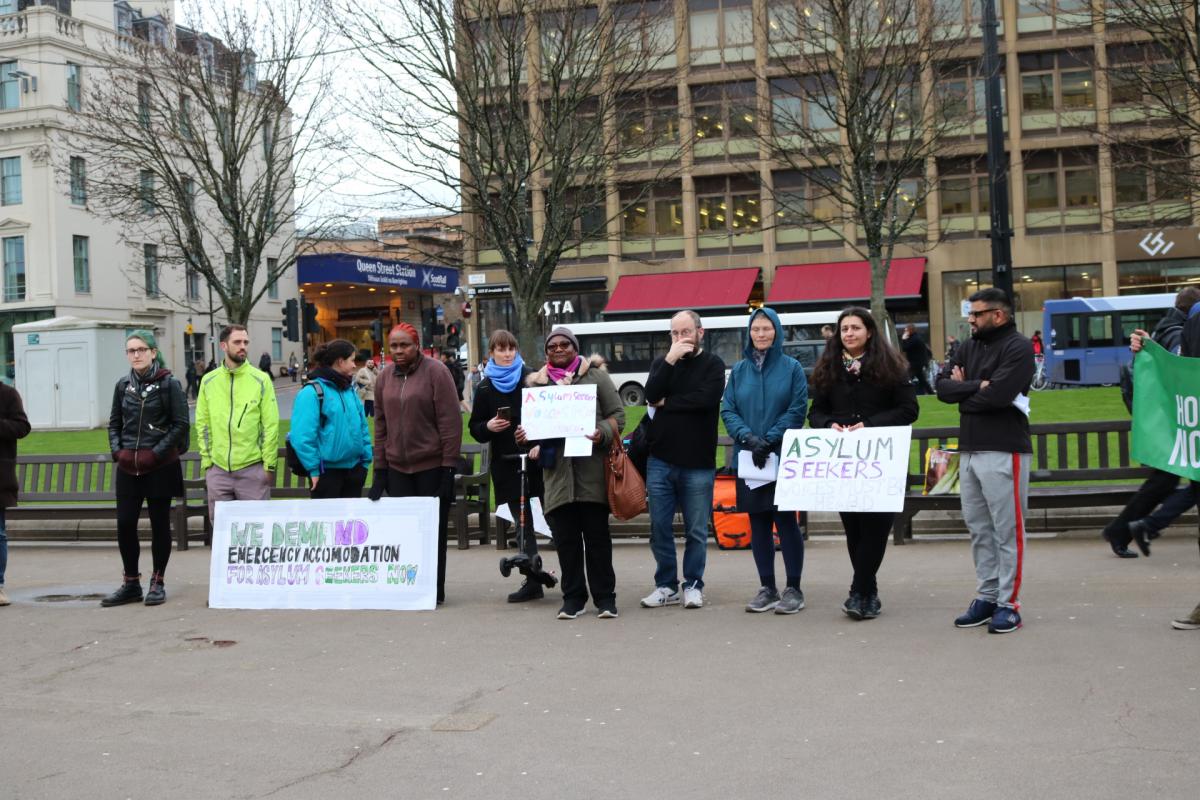 Last week, protestors gathered outside the offices of Glasgow City Council to hand in a letter making demands in relation to the recently published Glasgow Asylum Task Force (GATF) report. Lead by Living Rent, The Unity Centre and Migrants Organising for Refugee Empowerment (More), the campaigners issued a letter to the representatives of the Glasgow City Council task force. They demanded firmer action from the task force set up in response to uproar surrounding the decision by Serco to evict 300 asylum seekers from their Glasgow accommodation in July 2018.

They acknowledge that there are many positive aspects to the report. However, Belinda Ikeji from MORE, said: “This report has some good ideas – we support right to work and not having to go to England for fresh claims and interviews, but the real issue of evictions has been completely ignored. The only mention of destitute people in the report is to say that the taskforce has no idea what to do about them! And then they threaten those who support them with criminalisation, it’s a lot of time and money wasted.”

Earlier this year, a report was issued by the Destitute Asylum Seeker Service (DASS) on ‘Destitution among people refused asylum in Scotland’ which found that, in Scotland, there could be as many as 1000 people who have been refused asylum and are at risk of destitution. They are unable to work, or access any mainstream benefits,  including state provided accommodation. This has resulted in poverty, social isolation, exploitation and a deterioation in physical and mental health.

Speaking about the DASS report, Graham O’Neill, Policy Officer at Scottish Refugee Council said: “Destitution really means absolute, abject poverty. It’s an urgent human rights concern that so many people in Scotland are forced into this situation. We all have the right to safety and the basics of a dignified life, including housing, food, clothing, medical care, social services, and financial support. But this research shows that people who are refused asylum are blocked from having their basic needs met.”

In response to the letter, Glasgow’s Chief Social Worker, Susanne Millar, said: “We will continue to work with third sector partners and the Scottish Government, to go as far as we can, within the existing Westminster legal framework, to support people whose asylum claim has been refused by the Home Office, leaving them with no recourse to public funds.”

Councillor Jen Layden, Glasgow’s City Convener for Equalities and Human Rights, said: “At each and every opportunity we have stated and re-stated our opposition to the no recourse to public funds policy put in place and continued by successive UK Governments which restricts our ability to engage with asylum seekers in a manner which affords them the dignity they deserve.

“We have recently put forward proposals to the UK Government which could put into effect one of the biggest transformations in the asylum system. It would allow asylum seekers to work and remove the demand for them to travel to the south east of England to register. I remain optimistic the Government will look favourably on these proposals, which would not otherwise have been considered but for the efforts of the taskforce.

“The City Government will continue to take every opportunity to make it clear to the Home Office that changes to the system are required, not least that local authorities and not the private sector should provide asylum accommodation and be funded accordingly to provide appropriate levels of support for asylum seekers in the city.”

Serco, “a leading provider of public services”, houses asylum seekers in Glasgow on behalf of the Home Office. In July last year, in an unprecedented move it announced it would be evicting asylum seekers who have had their applications rejected by the Home Office but are at various stages of appeal, prompted by the decision that the Home Office does not reimburse Serco for the direct cost of housing asylum seekers who have not been given leave to remain. Cross-party resistence and hunger strikes in response to the lock-out prompted a temporary retreat by Serco. In January, it was announced that from this September, Serco, will no longer be contracted to provide the housing.

Explainer: Why are asylum seekers in Glasgow facing mass eviction and a ‘humanitarian crisis’?

The campaign groups who submitted the letter are still awaiting their official response.