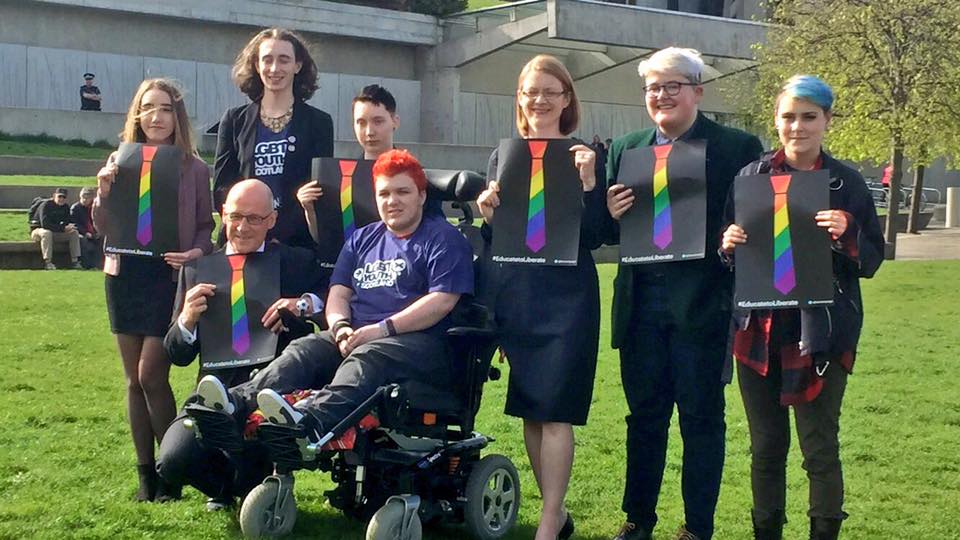 THE SCOTTISH GOVERNMENT has established a working group to investigate the implementation of an education system in Scotland that is inclusive of LGBTI youth, after a two year campaign to reform Scottish schools.

The Scottish Government moved on a motion passed at SNP conference last month to establish the working group, which will include the grassroots Time for Inclusive education (Tie) campaign and other LGBTI equality groups and young people, working with the Association of Directors of Education (ADE), after a Scottish Parliamentary debate on the Tie demands that saw consensus across all parties.

“We are not a parliament of bystanders.

“The Tie campaign has a clear ask and the challenge to the Scottish Government is to successfully bring forward legislation in the lifetime of this parliament. And if it looks like that won’t happen, it will be down to other MSPs to make sure that it does.”

A majority of Scottish MSPs have signed a pledge backing Tie’s demands.

Addressing the cabinet secretary for further education and higher education Shirley-Ann Somerville, who was stood in for John Swinney during the debate, she said: “It is time for inclusive education.

“I see the cabinet secretary in his seat, I ask him to think of all the LGBT children and young people who have to face school tomorrow and the next day and all the days after that.

Christina McKelvie MSP, who was a co-sponsor of the motion for a working group at the SNP’s conference in Aberdeen in March, spoke about the Tie campaign’s ability to save young lives.

“The Tie campaign has already saved some young lives

“To those young LGBTI people who don’t quite feel comfortable in their skin, who somehow believe that because they are gay, leasibian, bisexual or transgender it makes them less normal, we have a clear message for you today

“It’s ok, you are loved, you are welcome, you are normal and you are worthy and ou have your place alongside us as your brothers and sisters here in Scotland.

Watch: The full Scottish Parliament debate on the Tie demands

Somerville said: “Our education system must support all Scotland’s young people to reach their full potential and we have listened carefully to concerns about the difficulties being faced by some young people in schools. “While local authorities and schools are best-placed to decide how to deliver the curriculum based on local needs and circumstances, there may be more that can done to improve the education experience for LGBTI young people. That is what this working group will consider and we look forward to receiving its recommendations in due course.”

The Tie campaigns demands include changes to Scottish school curriculums so that they provide an education inclusive of the range of sexualities and gender and sexual identities in society, that local authorities monitor specific instances of homophobic abuse in schools and teacher training.

A Tie spokesperson said: “For the last two years we have campaigned from a grassroots level for LGBTI-inclusive education in all Scottish schools and so the launch of this Working Group marks a significant step forward – not only for this movement but for all LGBTI young people across the country.

“As such we welcome this news and now look forward to working alongside the Scottish Government, and other organisations including LGBT youth Scotland, Stonewall Scotland, Equality Network and the Trans Alliance in order to ensure that the support that exists for our campaign translates into real change.”

He warned: “This working group must lead to tangible action, it must not be delayed it must not be drawn out unnecessarily and it must have a clear purpose and the freedom to come to the conclusions that the evidence leads it to.”

Scottish Conservative MSP Ross Thomson said: “A majority of MSPs have signed the Tie pledge, there is a mandate for action and now the ball is in the Scottish Government’s court, to take immediate and meaningful action to deliver the proposals outlined in the pledge.

“We need visible and effective leadership to promote equality and eliminate prejudice in the classroom.”