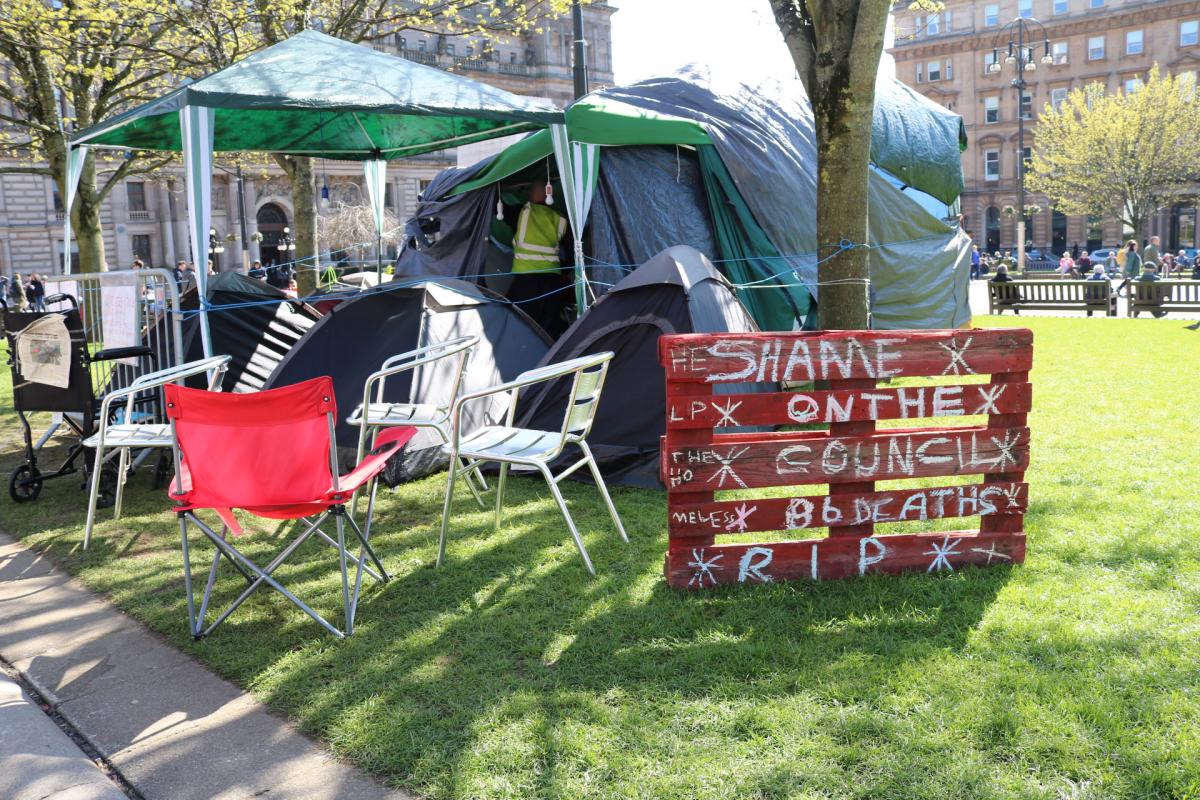 CAMPAIGNERS said they were happy with the result of a court case which led to the end of the ‘tent town’ protests in George Square, after Glasgow City Council agreed to carry out complex needs assessments and find homes for the people that have been occupying a corner of George Square in Glasgow.

The Sheriff stated to Sean Clerkin, a housing activist who represented ‘The Occupiers’ in court: “Each person you represented is looking for an assessment of their complex needs. If Glasgow City Council will assess each person and discharge their statutory duties, you will withdraw your opposition to the decree.”

This proposal was accepted.

Speaking outside the chamber, Clerkin said: “This is a victory for the homeless in Glasgow. Glasgow City Council are now obliged to carry out complex needs assessments for everyone in the camp. Otherwise they will have broken the commitment made in court.”

Last week, CommonSpace reported that the eviction notice had been delayed one week, allowing protestors a chance to find legal representation.

Despite making efforts to acquire appropriate representation, the group was unable to, leading to Clerkin representing the group.

Around nine people are staying the camp at the moment, but there are around 15-20 pepole in total who have been coming and going. The camp had a strict no alcohol and no drugs policy, and people had been asked to leave on these grounds.

Kirsty Forsyth, one of the camp residents, told CommonSpace: “I’ve been homeless on and off since 2009. I’d been sleeping in the X19 Bus Shelter for the last five and a half weeks before joining the camp.

“I suffer with mental health and problems relating to alcohol and have had a few suicide attempts in the last couple of months. I was told by my caseworker on 2 January that I’d get housed within three weeks. It’s been over three months now and I’ve not heard anything. I feel safer in the camp surrounded by people than I did in the bus shelter.”

WATCH: Homelessness On The Rise – How Do we Eradicate it?

Paula McGarry said she was in the camp because she is fleeing domestic violence.

“I have a tenancy, but I don’t feel safe there. Every time I get a new home, he finds me. I lost my mum when I was ten. I found her on the floor with a needle sticking oot her arm. If I was to stay in a hostel, my addiction problems would go through the roof,” she said.

Clerkin, a member of Glasgow Tenants Organisation, added that the Council had breached laws on the requirement to provide temporary acommondation for those who apply, a point Shelter Scotland made in a protest outside the City Chambers in July last year.

“In 3025 occasions between April 2017 and March 2018, Glasgow City Council breached the statutory laws – when homeless people have applied for housing but have not been given temporary accommodation,” Clerkin said.

He said that following the Sheriff’s verdict Glasgow City Council is now under obligation to implement complex needs assessments, find temporary accommodation and wrap around services for all residents of the camp.

A spokeswoman for Glasgow City Council said: “The council was today granted decree to remove the protestors occupying George Square by Glasgow Sheriff Court. This was granted after both parties agreed to complex needs housing assessments, on named camp occupants, being carried out by the council.

“Whilst undertaking these assessments the council will continue to offer them advice, assistance and accommodation.

“Several protestors have now also accepted our previously made offers of temporary accommodation. It is unfortunate that this matter had to go to court before this resolution could be reached.”