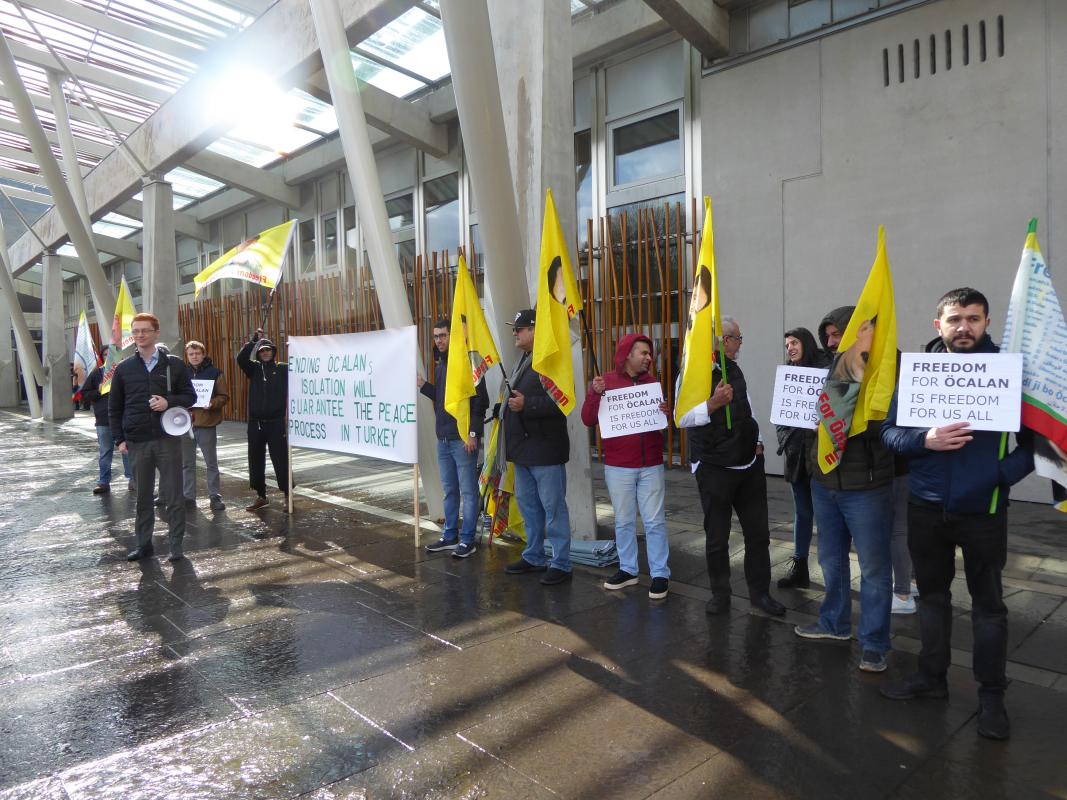 On Thursday [5 April], Scottish solidarity with Kurdistan held a solidarity protest at the Scottish Parliament with Kurds facing human rights abuses from the Turkish Government, including Kurdish leader Abdullah Ocalan, who turned 70 yesterday

ABDULLAH OCALAN marked his 70th birthday in the Turkish island prison where he has spent the last 20 years on Thursday. During that time he has repeatedly tried to negotiate a peaceful and respectful future for the Kurds in Turkey, where they have suffered a century of oppression of their culture and identity. But the Turkish state has turned its back on peace, and every day brings a new level of authoritarianism.

Edinburgh Kurds and friends marked Ocalan’s birthday, and our support for the Kurdish hunger strikers, with a demo in the icy April showers outside the Scottish Parliament, where we were joined by Green MSP Ross Greer.

President Erdogan is challenging last Sunday’s local election results in the areas where, despite intimidation and control of the press, the ruling party failed to win. In the majority Kurdish east, he promises to arrest the elected representatives of the pro-Kurdish HDP and replace them with appointed ‘trustees’, as they did 3 years ago. Turkey is an increasingly fascist state, but the rest of the world is prepared to look the other way. This indifference to injustice has inspired over 7000 Kurds to go on indefinite hunger strike, demanding, as a basic first step to peace and dignity, the recognition of Ocalan’s human right to visits by his family and his lawyers.

Greer made clear that the Cross Party Group for Kurdistan would be putting pressure on not only the Turkish government, but also on the UK Government. In particular, they would be calling for the UK to stop selling arms to Turkey, and to delist the PKK as a terrorist organisation – and Greer pointed out that “there is no route to peace in Turkey that doesn’t involve sitting down and negotiating with the PKK”.

He also announced a practical initiative, which has been put together by the Cross Party Group, to build on our previous twinning scheme and link up Scottish local politicians with HDP local politicians in Turkey. (This should wake up other political parties too.) In this way, when something happens to the HDP politician, there is someone here who can’t look away and can help others take notice.

Help sustain a media that works for you