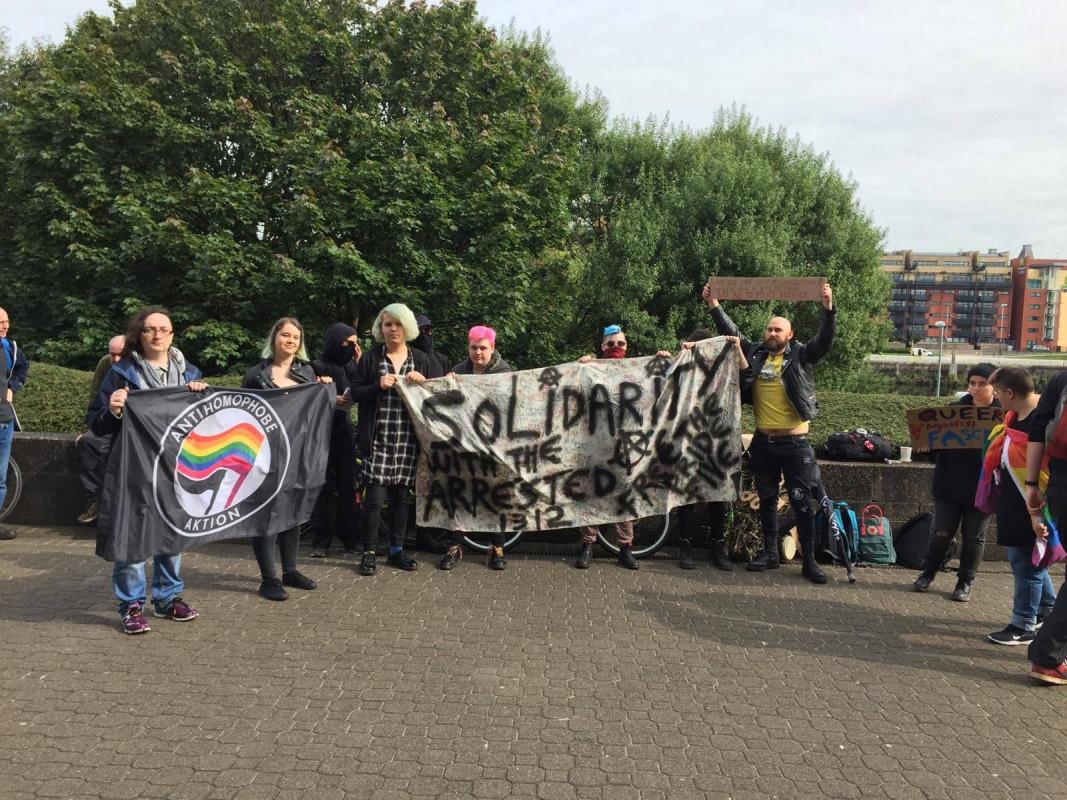 Protest held after five arrests made at Glasgow Pride festival

DEMONSTRATORS held a protest outside Glasgow Sheriff Court today against arrests made at the Glasgow Pride festival on Saturday.

Five people were arrested at the event where members of the LGBTI community demonstrate and celebrate and promote LGBTI equality.

The main reason for the protest was the arrest of a 16-year-old boy, who was detained for an alleged homophobic offence.

Demonstration organiser Oli Mordin said: “We had five people arrested, four of which are LGBT people and one of which is an ally. We believe their arrests were unjust and completely immoral and dangerous and horrible and so many other things.

“We believe that Pride is a protest and it should always be a protest and you should not be arrested for protesting against what has become a capitalist and pink-washed demonstration of Pride celebration.”

Mordin, who wasn’t at the Pride event on Saturday when the arrests were made,  was sympathetic towards the 16-year-old who was jailed.

Pride Glasgow praised the efforts of the police at the march, and criticised the actions of some people attending the festival that attracted thousands over the two days.

Posting on Facebook on Sunday, Pride Glasgow said: “Pride Glasgow is extremely disappointed in the actions of a small group of people that tried to target the Pride Glasgow Parade yesterday.

“Whilst Pride Glasgow promotes an equality for all agenda and free speech the actions of this group jeopardised the safety of everyone attending the parade.

“The Pride Parade in Glasgow has always been a platform for protest alongside a celebration of LGBTI life and we are saddened that this shameful attempt to sabotage the parade has come from within the LGBTI community.”

However, Scottish Green Party councillor Kim Long said the statement from Pride Glasgow following the arrests was “deeply troubling”, and added her view that it was wrong that a Police Scotland delegation was allowed to lead the march.

Posting on Facebook, Councillor Long said she believed the voices and concerns of LGBTI people should be at the forefront of Pride celebrations, not corporations or institutions.

She told the crowd “Love is Love, wherever you are and whoever you are”, and added there was still much to be done to achieve “true equality”.

A Police Scotland spokeswoman said: “Two men aged 16 and 24-years-old were arrested and detained in custody.

“This was for alleged breach of the peace with homophobic aggravation, police obstruction and resisting police arrest.

“They are due to appear at Glasgow Sheriff Court on Monday.

“Another man, aged 19, and two women, aged 23 and 28 were also arrested and liberated for alleged breach of the peace.”